The forbidden fruit tastes the sweetest 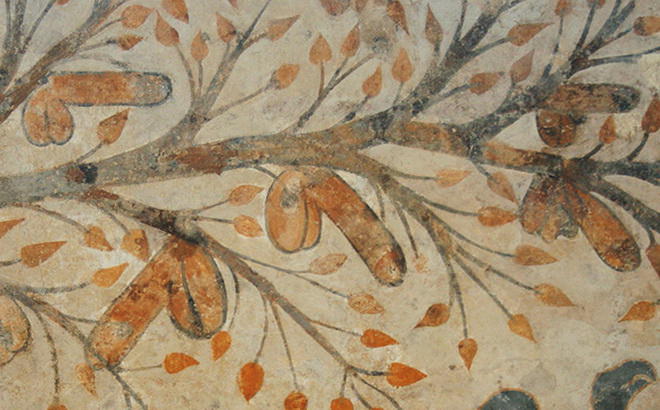 A surprising discovery was made in 2000 during the renovation of Palazzo dell’Abbondanza in a Tuscan town Massa Marittima. In the old public water supply point under the palace (so called Fonti dell’Abbondanza, built in 1265) the fresco was found on one of the walls. The depiction was rather damaged, but after restoration it is clear that it shows a big tree and the women who pick the fruits (and two of them even fight over them). Those fruits, without any doubts, are simply penises. 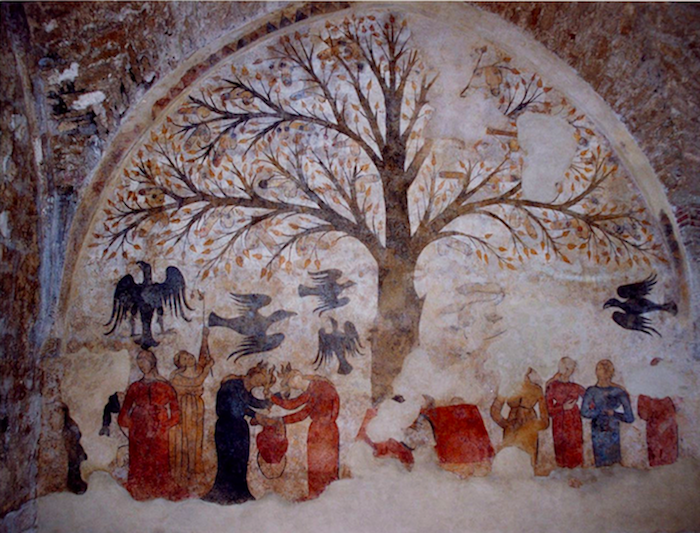 Surprisingly, the motif of “phallic tree” might be found in some other medieval works of art. There is a wooden casket dating to the 15th century that is decorated with the depiction of an elegant lady picking the “fruits” from the “phallus tree”, kept in the Franciscan Museum in Villingen-Schwenningen (Germany). And it must be said that although many scholars made an effort of analysing those depiction, there is still no one good explanation of their meaning. There are some proposals: an idea of a “Tree of Fertility”, or the depictions of the sin or even a witchcraft; but in fact it is most probable that those are just naughty visual jokes, perhaps referring to the problems of impotence or the insatiability of women. According to the sources in Nordlingen in Germany “phallic tree” was a part of a carnival procession in 1510. And now we tend to complain that nowadays’ reality in oversexualised… 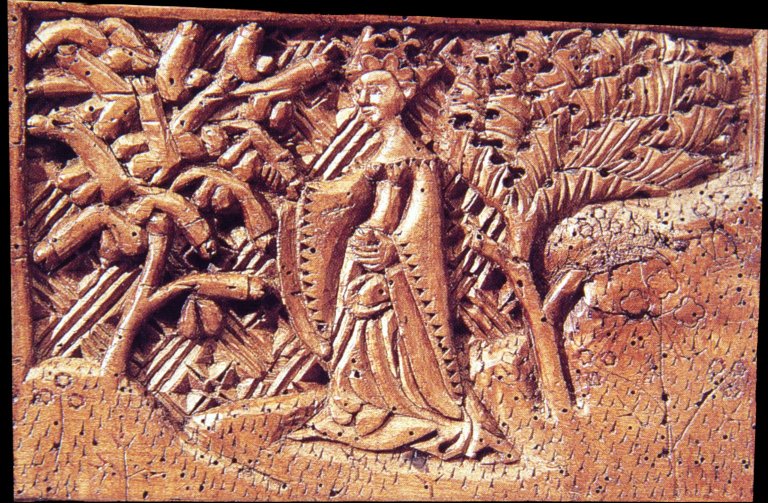 We could assume that those images were made by some young man – it seems to be popular for the school boys to decorate the margins of the notebooks with the drawings of penises. However in this case we would be very wrong; in fact it seems that these particular images were painted by a woman! The manuscript was produced in a secular Parisian workshop, run by a marriage couple: Richard and Jeanne de Montbaston. After her husband died in 1353, Jeanne kept running the workshop herself, and she was probably responsible for the decoration of that manuscript. 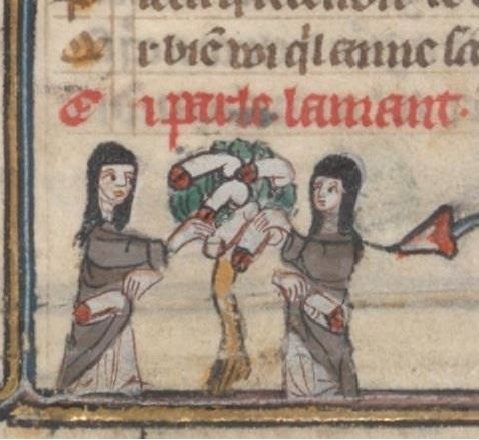 But why nuns? Well, we don’t know that, but we may speculate. It seems that in the folklore medieval culture there were some stories focused on the idea of unfulfilled lust of the convent women. A very good example would be “Decameron” by Giovanni Boccaccio – the first story of the Third Day is about a man called Masetto da Lamporecchio, who becomes a gardener in a convent of nuns and pretends to be mute. He thought that such a trick would help him have an affair in the convent, but he did not expect that all the nuns would want him to be their lover as soon as they learn that he can’t tell anyone about that. After some time a poor fellow was so exhausted that he decided to pretend that a miracle happened and as a result he could talk again. As he said: “one cock sufficeth unto half a score hens, but half a score men can ill or hardly satisfy one woman”. 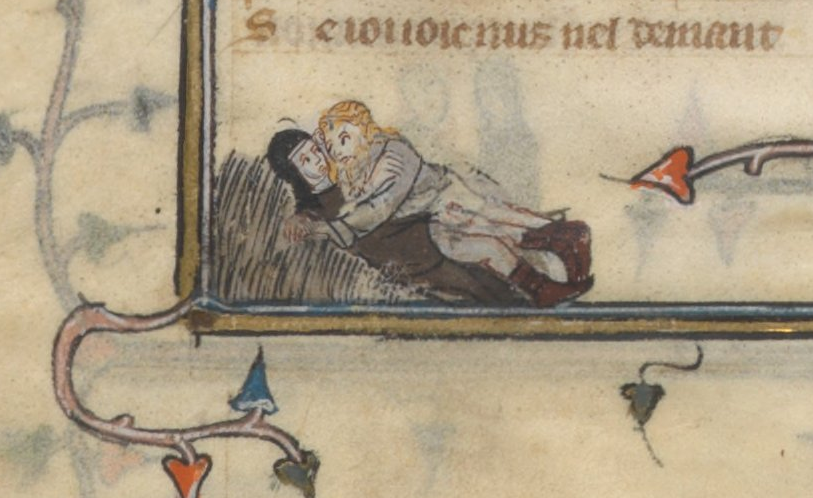 Where did those ideas about nuns come from? Of course, nuns are particularly tempting, as they are the forbidden fruit. However, we should also remember that back then many women ended up in the convents for other reasons than their faith. Lots of young girls were just given by their parents and had no chance to object; also, many young widows decided to lock themselves in the convent instead of remarrying someone their family chosen for them. Those women were in a difficult position: being a nun was not entirely their best choice, and as they used to have husbands, they were aware of their sexuality. They had needs and they knew how to fulfill them. As a result, we get the images like a print below, dated 1555: a nun is giving a fish to a cat, expecting to get a penis instead. 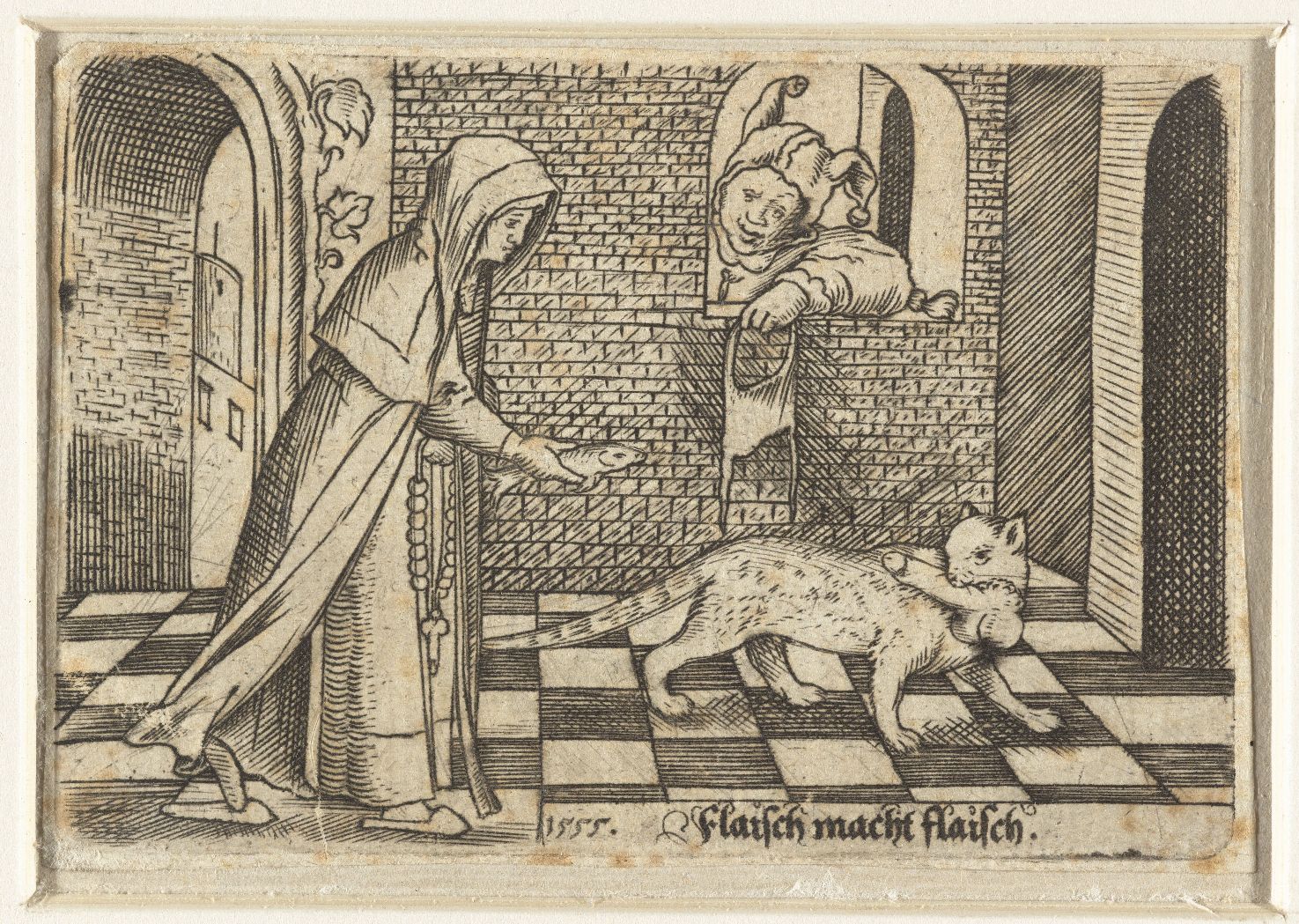 The inscription ” Flaisch macht Flaisch” may be translated as “meat equals meat”, and if we wanted to describe this image with some kind of proverb, we would say: “nun desires a penis as much as a cat wants a fish”. The nun clearly not only desires the penis, but actually worships it, judging from the shape of her rosary.