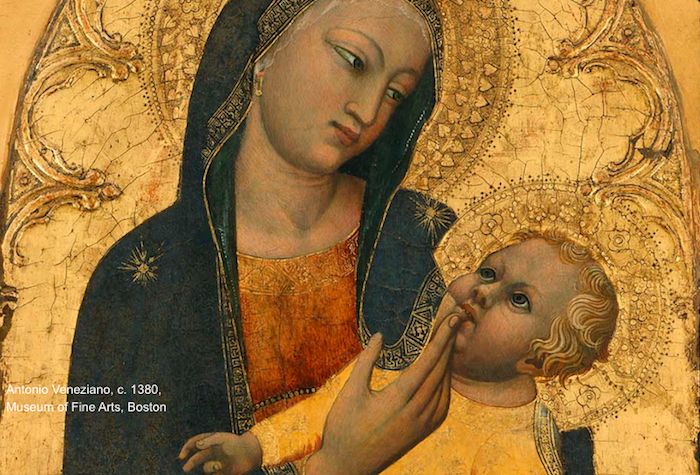 Middle Ages is often considered a pious epoch, although it was in fact often quite “carnal”. Today I would like to focus on particular depictions that theoretically should not be ambiguous: I am thinking here about the images of Virgin with Child. Surprisingly it is possible to find some examples that are clearly disturbing. It is often caused by the fact that the artist wanted to picture some complex theological idea but just something went wrong. 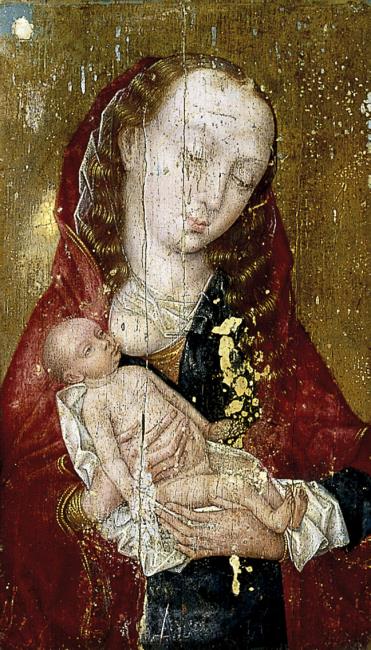 The first example would be my favourite “Virgin with a Breast on her Neck”, kept in the City Art Gallery in York. Of course it is supposed to be Nursing Madonna, called Maria Lactans, which is a depiction stressing the role of Mary as Christ’s mother in the God’s plan of Salvation. This particular painting is based on the image by Rogier van der Weyden, showing Virgin with Child being painted by Saint Lucas (below), but something just went wrong with the proportions. The whole composition is shorter, but the artist did not want to cut it through the Child, so he decided to lift the figure of Jesus a little bit – along with the breast… As a result we get a disturbing image of a bump on the Mary’s neck, but at least the theological meaning is kept. 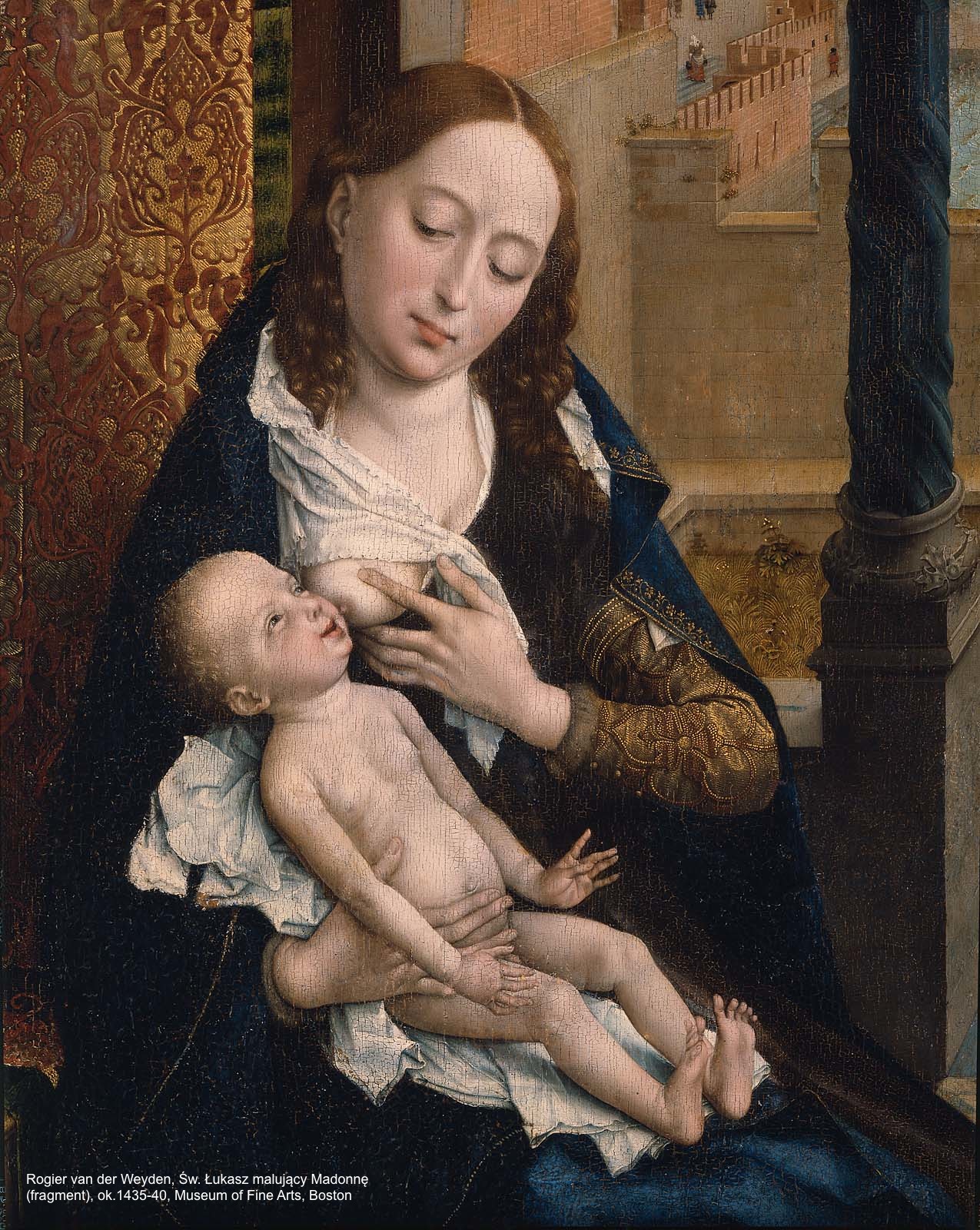 Some artists on the other hand did not want to show the nursing itself (breastfeeding in public place, as in the altar, may have been a problematic issue!), but decided to show the mother-child relation in a more subtle way, for example picturing Baby Jesus touching Mary’s breast or neckline area. It usually seems fine, like here: 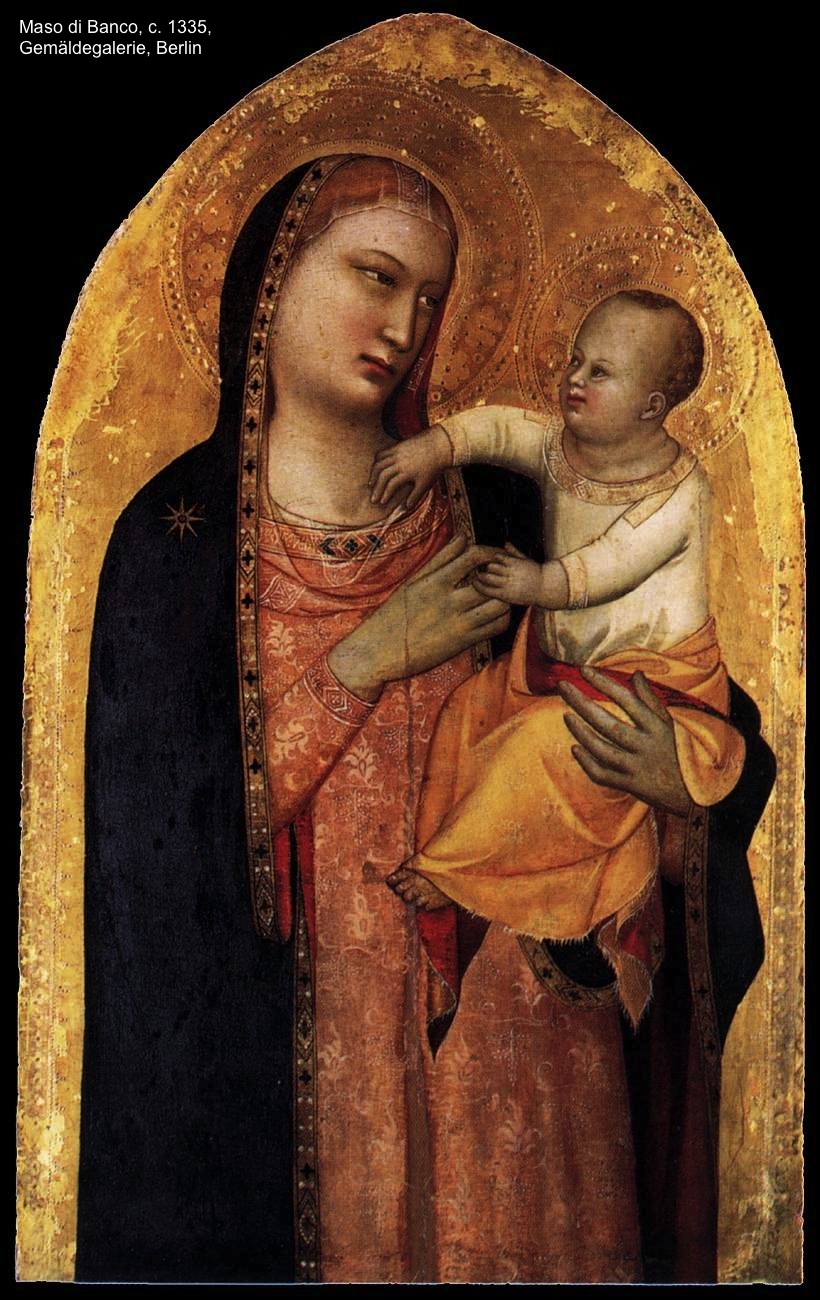 But of course sometimes an artist may have gone too far, as did Lorenzo di Bicci in his painting, today kept in the Fine Arts Museums of San Francisco (1405–1410): 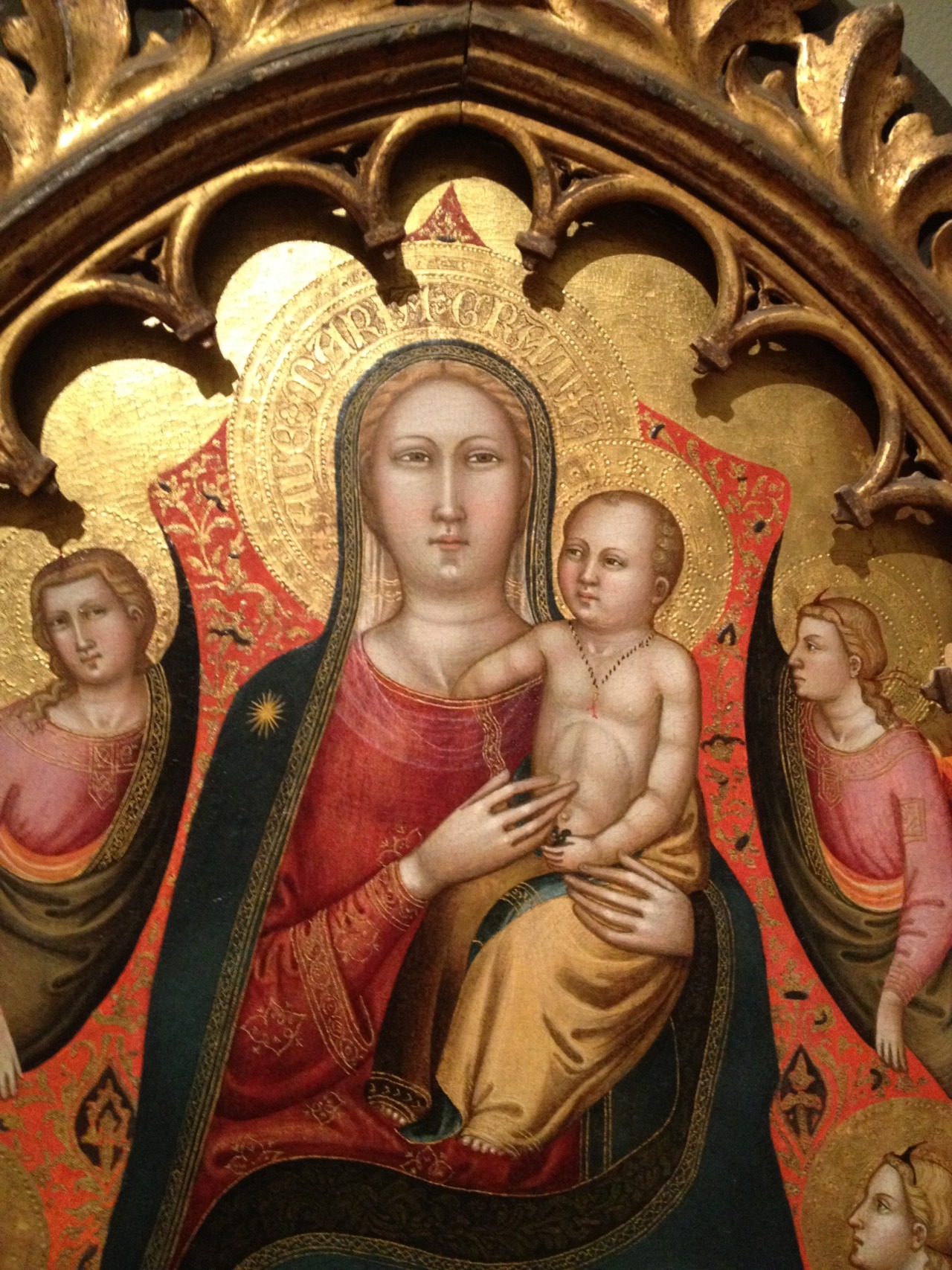 The depictions of Virgin with Child are not only the images of the Motherhood; they also refer to the mystery of incarnation, so it is important to stress the fact that God truly became a man, flesh and blood. Stressing the truly human nature of Christ was often connected with exposing his body, including the private parts. That is why Christ Child is often depicted completely naked – it is exposing the Body of Christ, Corpus Christi. We might additionally get some additional attributes referring to the fact, that Christ is the King of Universe, like a sceptre and an orb. And if an orb is a crystal globe, we additionally may enjoy the effect of a magnifying glass, as in the painting by Marteen van Heemskerck, showing Saint Lucas portraying the Virgin (Frans Hals Museum in Haarlem, 1532): 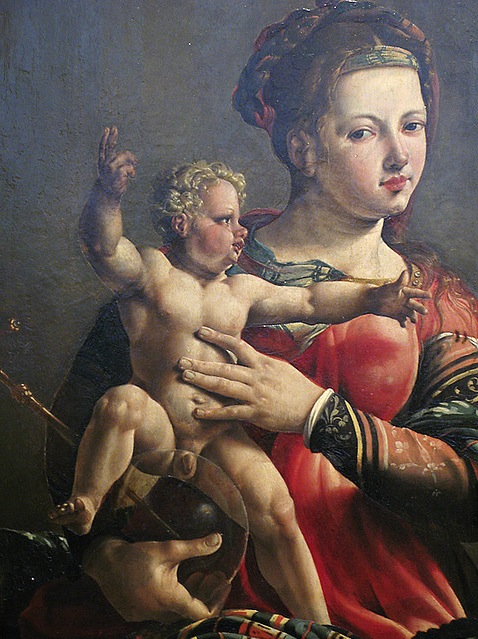 We may see that in the Heemskerck’s picture Saint Lucas recognised the danger and planned his own composition in a way that omits the awkward details. In this case we should obviously say that “God is in the detail”, as a saying “the devil is in the details” seem very inappropriate in this case. 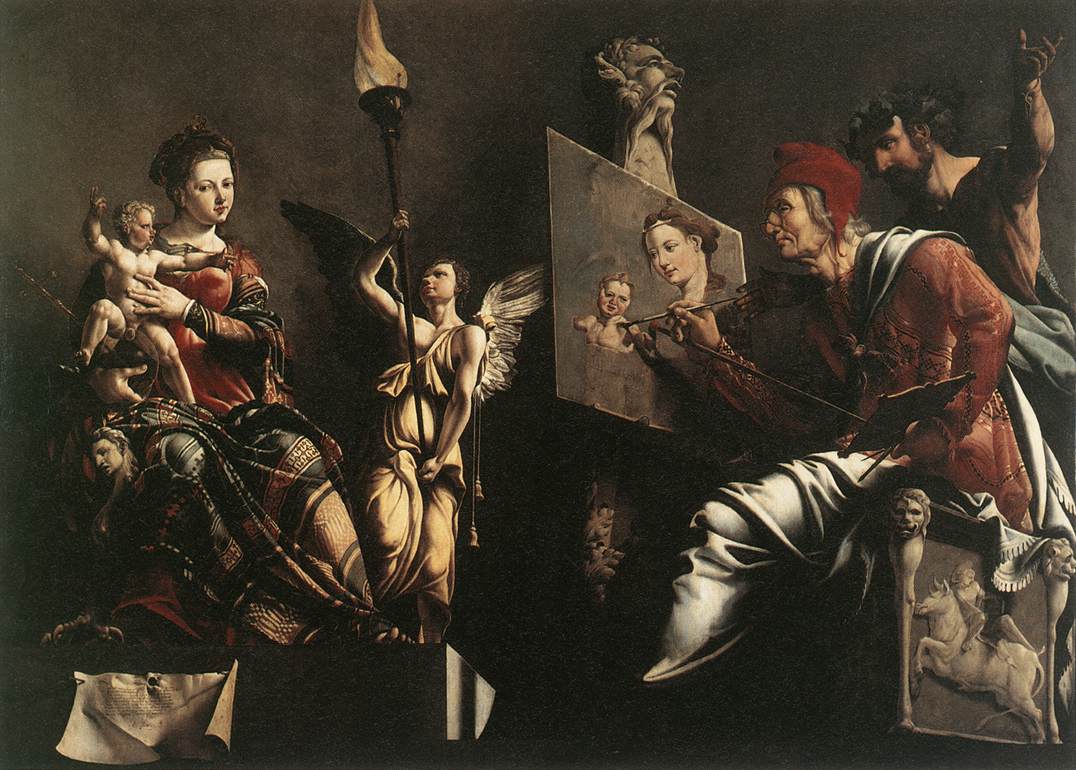 And at the end of this post I would like to show you something really twisted, although nowadays’ viewer probably don’t see the issue anymore. Would you believe that the real innuendo is hidden in the depictions of Child touching Virgin’s chin?! 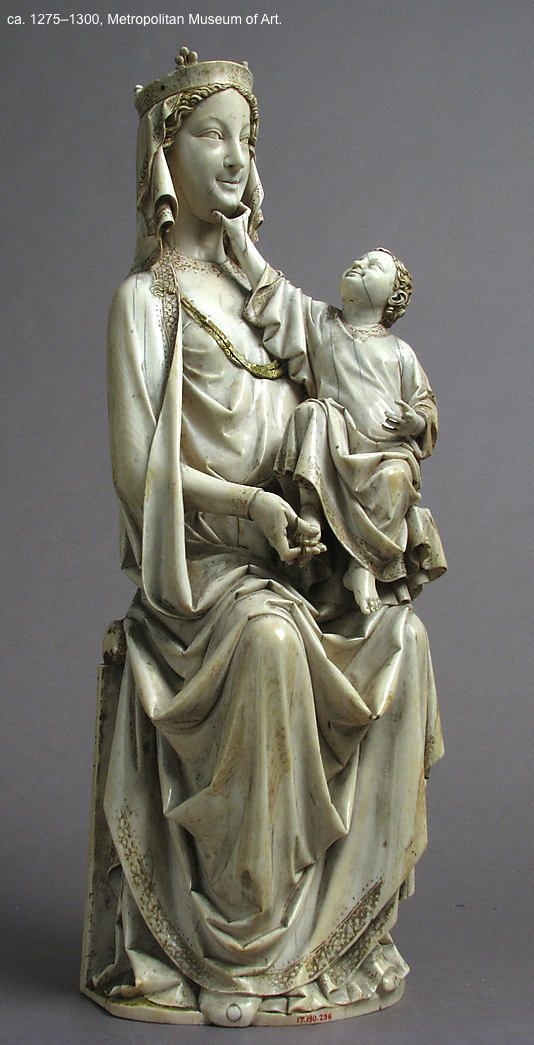 What’s strange about that? Well, the whole secret is hidden in the medieval meaning of this gesture: it was understood as a symbol of the physical relation between lovers: 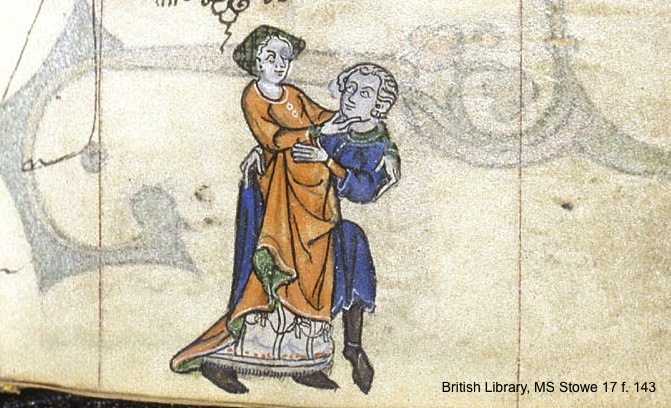 So why such a gesture in the depiction of a mother and her child? That refers to the idea that Virgin Mary, however is a mother of Jesus, also symbolises the Church (Ecclesia).  The Church on the other hand was often compared to the mystical Bride of Christ, and their mutual relation was supposed to be mirrored in the Song of Songs from the Bible. Nevertheless the bottom-line is that we get the symbol of the carnal desire in the depiction of a mother and a child, so it is quite disturbing. And apparently touching the chin may have been much more a risky gesture for the medieval viewer than grabig a boob! But well, that’s what happens when the breast grows almost on the neck… 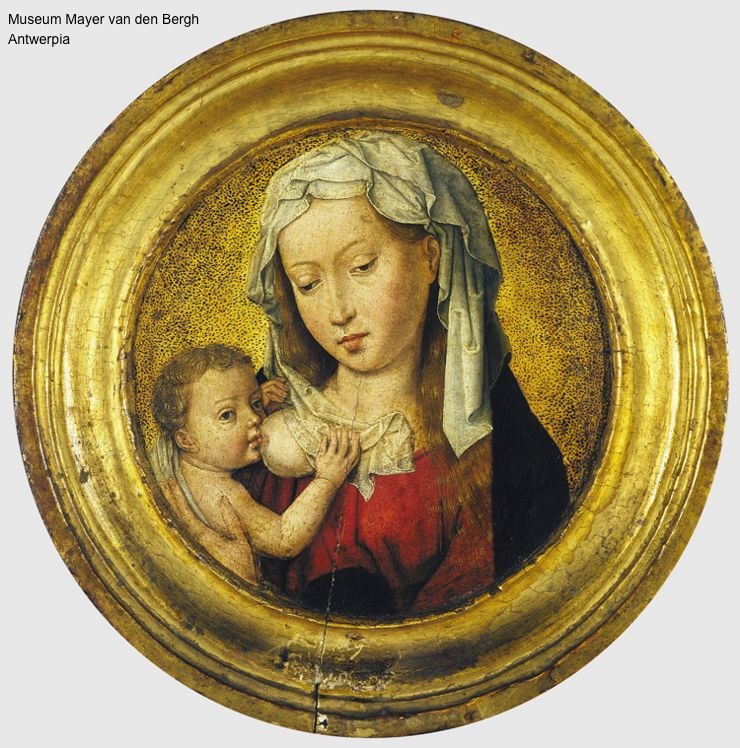 How can one not just adore Middle Ages? 🙂

Whoever would like to learn more on this subject, there is a book partly available on-line: Leo Steinberg, The Sexuality of Christ in Renaissance Art and in Modern Oblivion, 1983