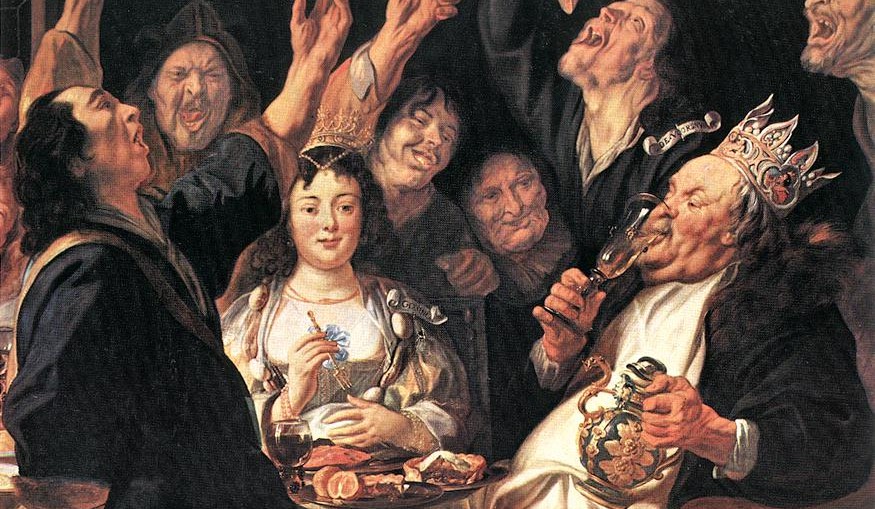 As we are now enjoying the carnival time, it seems a good idea to have a look at the painting that shows people having fun. It is a party with a lot of food and alcohol; the title is “The Bean King”, and it was created by a Flemish painter Jacob Jordaens (1595-1678). It does not show a real king and his court, but a popular custom of having a feast during the Twelve Days of Christmas, usually around the 6th January, which is the feast of Epiphany commonly known as Three Kings’ Day. 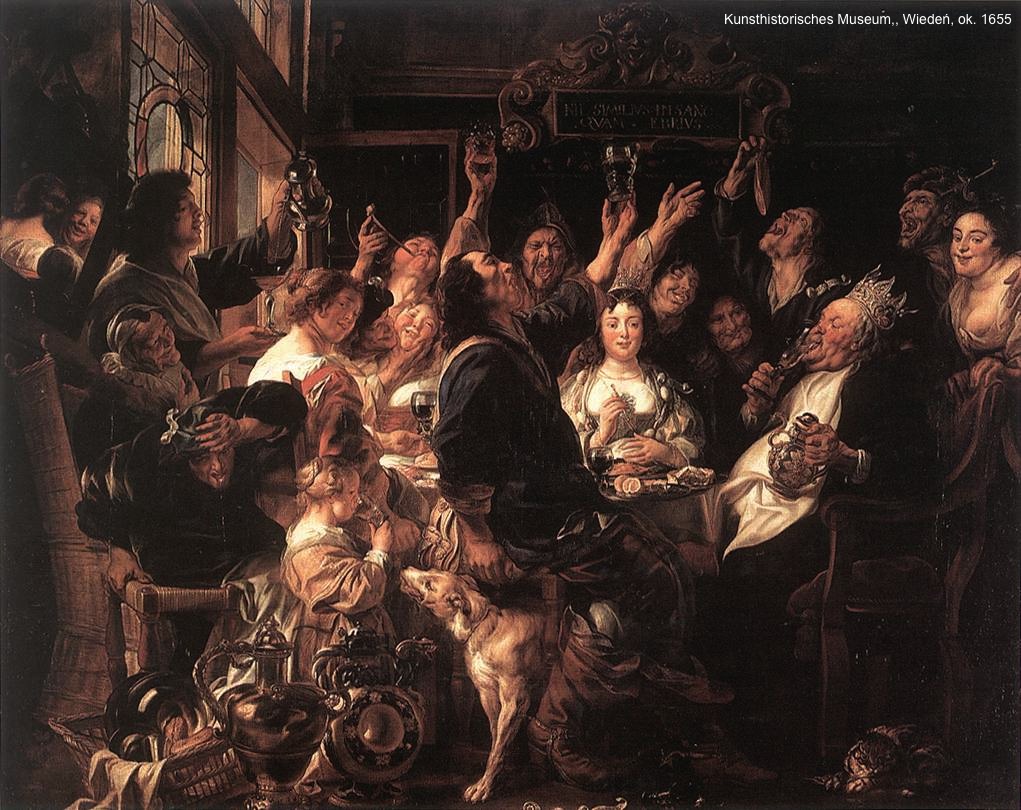 The idea is really simple: there is a special cake with a bean inside – whoever finds that bean in his piece of the cake, becomes a king of the feast. The king is expected to raise the glass regularly and every time the rest must do the same, shouting “the king drinks!”. Well, that is a nice way to spend the evening, isn’t it? Jacob Jordaens painted many versions of this subject (all the paintings in this post are by him).

It should be said that the tradition of a “king cake” goes back to the times of ancient Rome. They baked a cake with a bean during Saturnalia feast (that was around the end of December); the one who stumbled upon the bean was called “king of the feast.” For the Christians that tradition became a part of the Twelfth Night festivity. 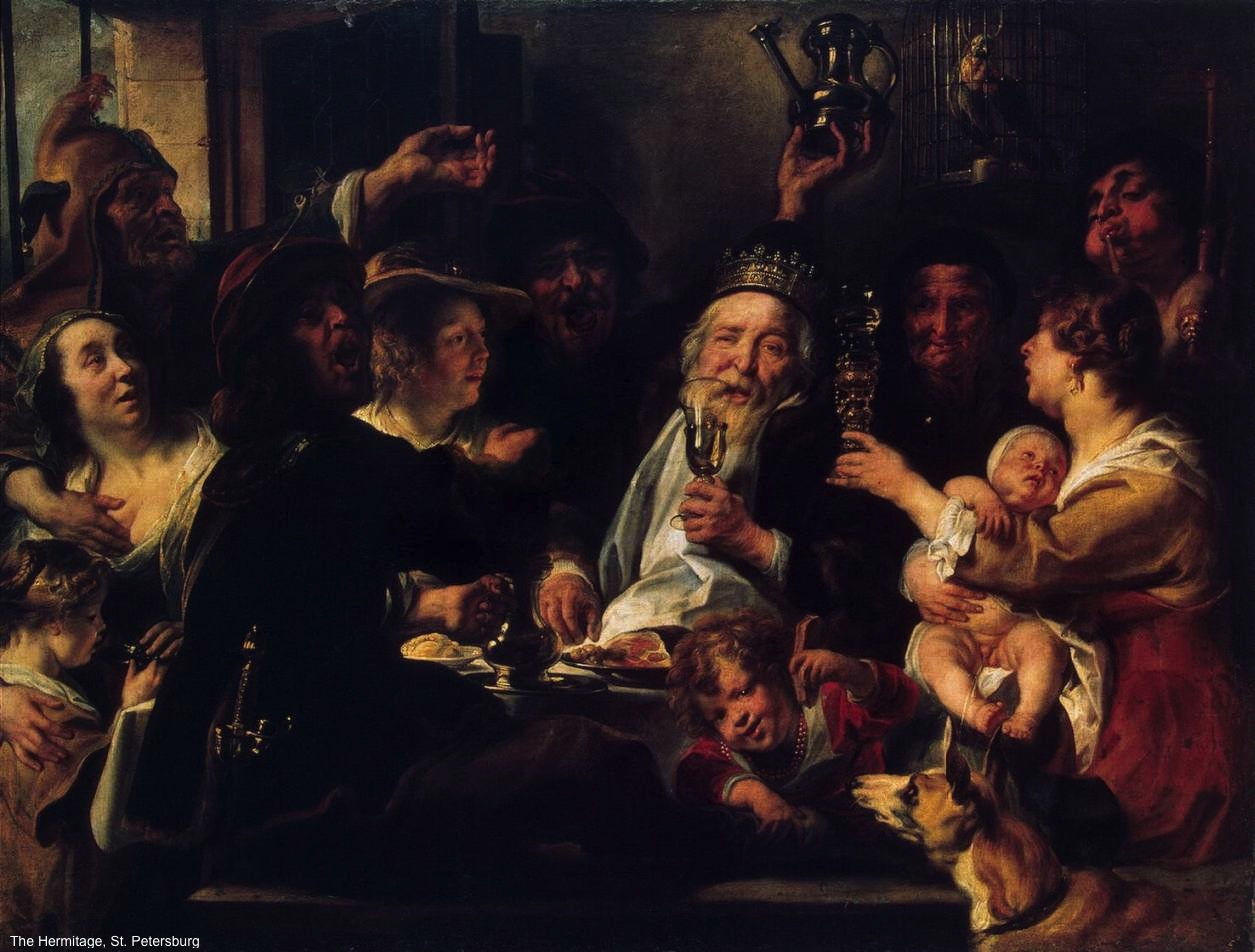 Let’s get back to the king cake: it is a still popular custom, especially in France, Belgium and Switzerland. Since 18th century the bean has started to be replaced by the tiny figure of Baby Jesus, which seems to be less secure idea, especially for the teeth of those who eat the cake. After the French Revolution, when people tended to reject their religious traditions, the other trinkets (usually made of porcelain) have been placed in the cake. Still, the ancient idea of a bean seems to be the best one: at least the bean is eatable, and probably it is not that easy to choke on it. 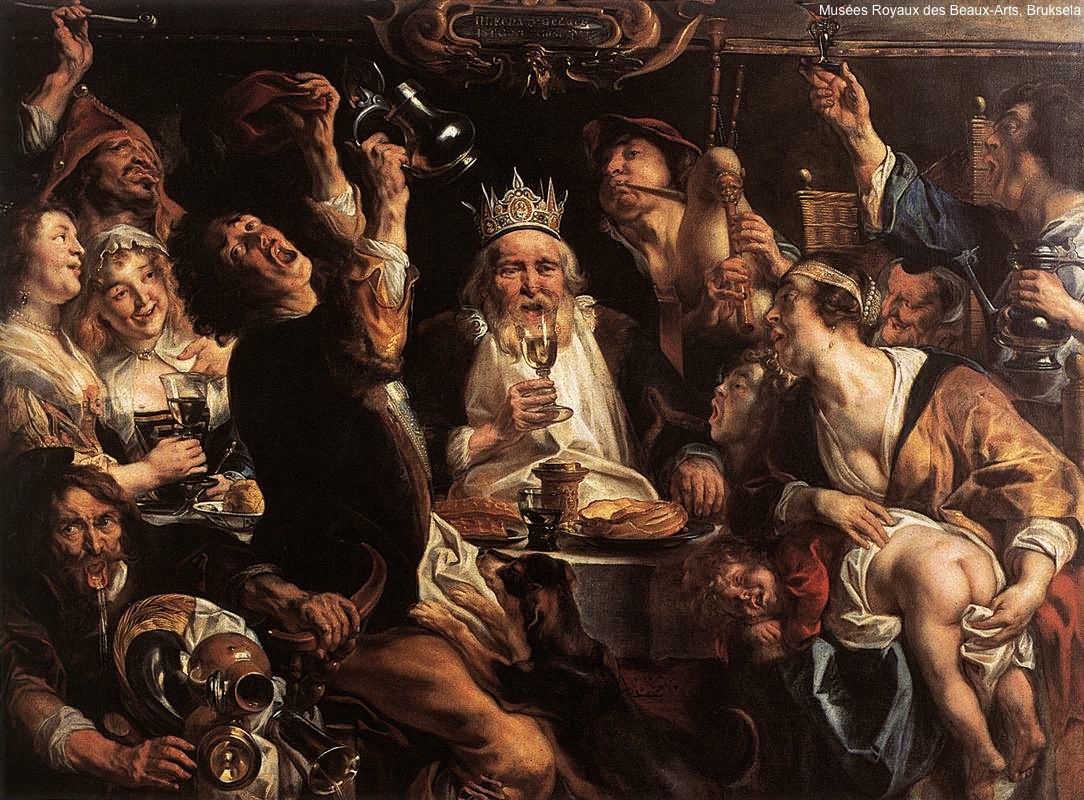 We should not assume though that Jacob Jordaens glorified the popular custom; on the contrary, he rather showed the merry company in a near-caricatural way. They drink excessively and that usually ends with loosing control and a personal dignity. Unrestrained emotion and merriment is shown in such an expressive way, that the facial features of the depicted people almost seem to loose their human character. To the left we can see a man throwing up just where he sits; to the right a drunk lady changes her child’s diaper. That is quite a tricky thing – the scene is placed in the 17th century tavern and we can assume that there was no changing table in the bathroom; moreover, there probably was no bathroom at all. Still, for the 17th century artist apparently changing the baby’s diaper at the table is as as bad as throwing up there. Some of nowadays’ mums would probably disagree, but let’s not make that discussion here. 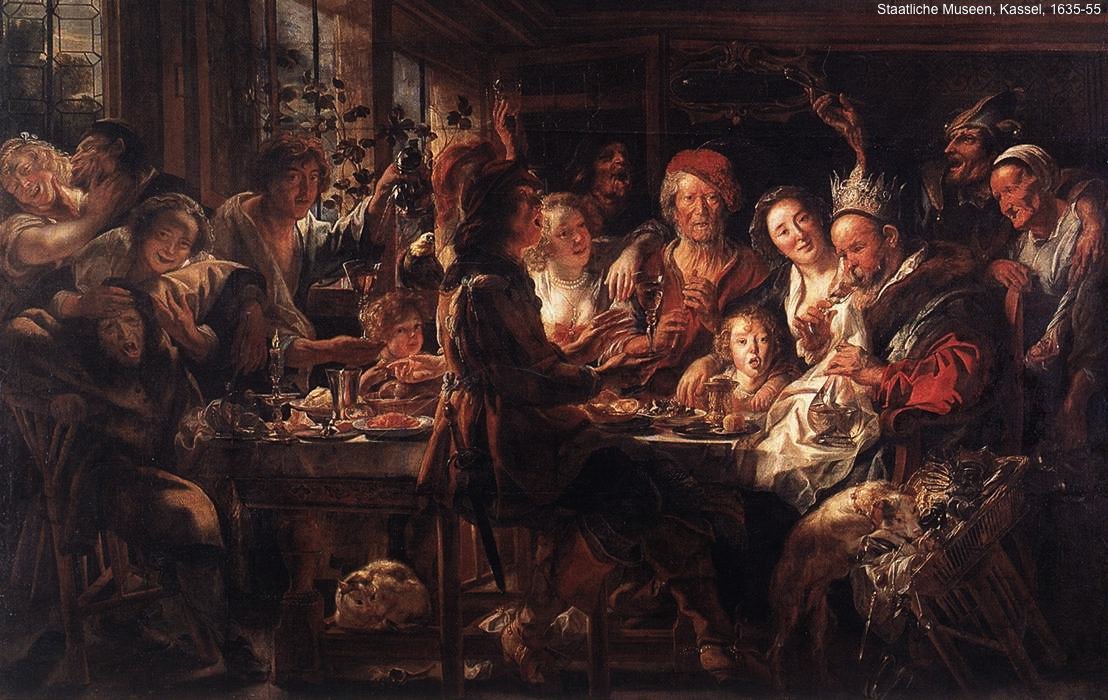 Surely everyone likes to have fun but we don’t want to reach the condition of the people depicted in these paintings. We could actually say that Mr Jordaens broke one of the main party-rules: at certain point you should just stop taking pictures. Such pictures always end up in the Internet.