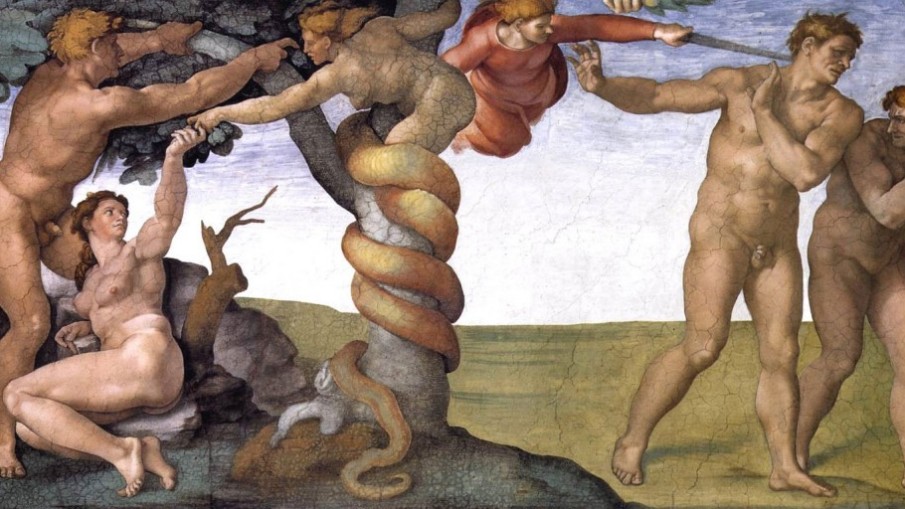 The Christmas has just passed, but instead of talking about Gospel let’s get back to the Old Testament. After all, Christmas Eve is the day dedicated to Adam and Eve.

The first people are usually depicted in the act of the first sin: when they taste a forbidden fruit from the tree in the paradise. Let’s have a look at the famous fresco by Michelangelo, at the ceiling of the Sixtine Chapel. We can see a tree, Adam and Eve, and of course a snake… but wait, is a snake also female? 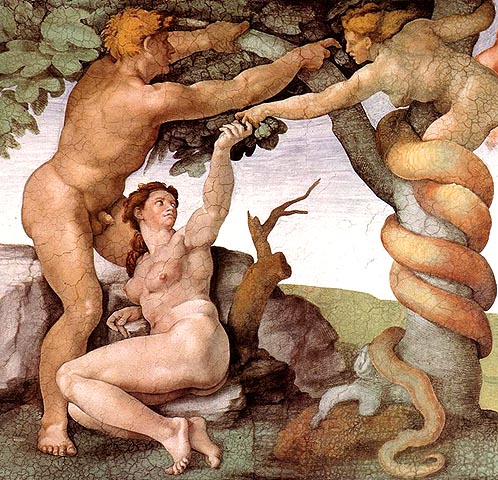 In many cultures a snake is considered a symbol of life and change: it throws away its old skin to be “reborn” in a new one, so in general it is a creature of a positive meaning. We could even have an impression that the Bible contradicts the idea of affirmation of life: the sin comes from the serpent through a woman to a man. The woman gives the man a fruit which has a meaning of creating a new life, so it is connected to the ideas of sexuality and fertility. And here we can see that also a serpent is a woman! And it is not a Michelangelo’s idea: there are more of such depictions; sometimes the snake has only a female head. Isn’t it chauvinistic? Well, it is not only a depiction of the idea that all what’s bad comes from the women. It is one particular woman: her name was Lilith. 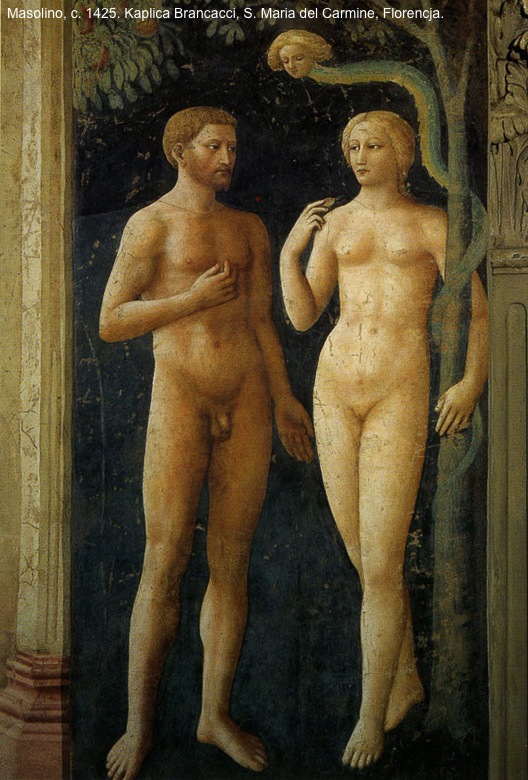 The character of Lilith comes from a very ancient past – it Mesopotamia the name Līlītu belonged to a female demon of the night. It was taken to the Judaic tradition and in Jewish folklore Lilith was an evil spirit responsible for the death of the mothers and new-born babies. In the Greek Mythology such a person was called Lamia – she was a mistress of Zeus and hunted for the small children after she lost her own (killed by jealous Hera). In general we may say that Lilith was a demon associated with fertility and death, present in many ancient cultures. But how did such a creature get to the Paradise? Well, unfortunately, she was the first wife of Adam. 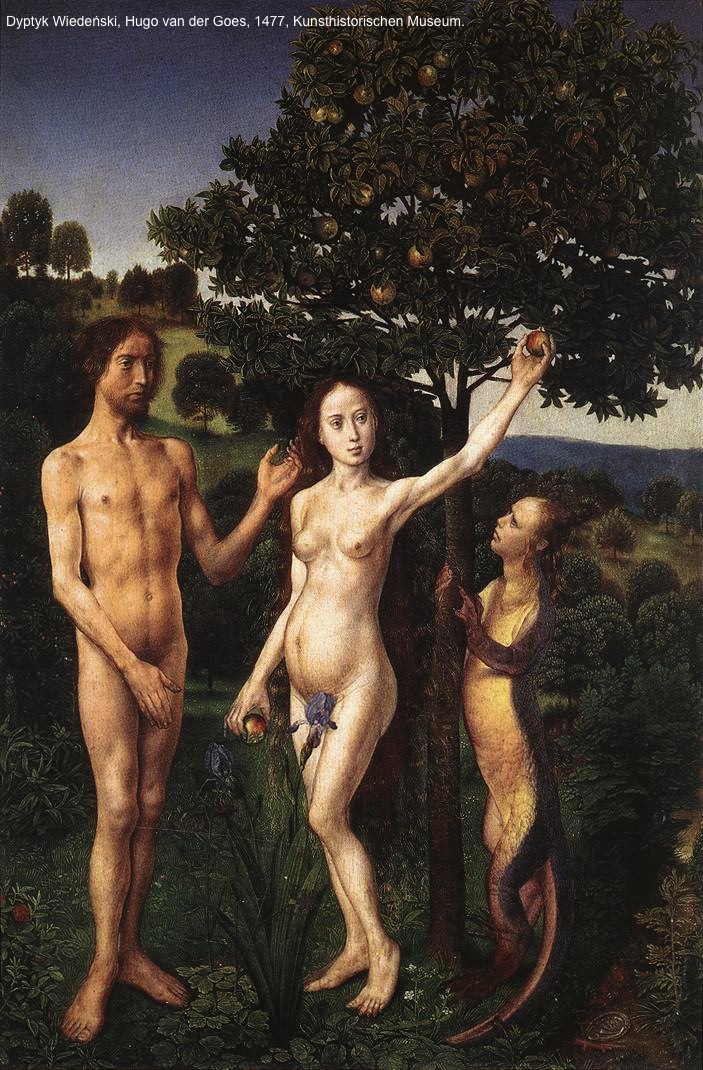 The idea that God gave Adam two women came from the mixup in the text of Genesis. In the first chapter we may read the initial description of the creation of people:

26 God said, ‘Let us make man in our own image, in the likeness of ourselves, and let them be masters of the fish of the sea, the birds of heaven, the cattle, all the wild animals and all the creatures that creep along the ground.’ 27 God created man in the image of himself, in the image of God he created him, male and female he created them.

At this point it seems that God created man and woman simultaneously, and in the same way, so it looks like the couple was equal. Something changed later, as in the second chapter we have another description:

18 Yahweh God said, ‘It is not right that the man should be alone. I shall make him a helper.’ 19 So from the soil Yahweh God fashioned all the wild animals and all the birds of heaven. These he brought to the man to see what he would call them; each one was to bear the name the man would give it. 20 The man gave names to all the cattle, all the birds of heaven and all the wild animals. But no helper suitable for the man was found for him. 21 Then, Yahweh God made the man fall into a deep sleep. And, while he was asleep, he took one of his ribs and closed the flesh up again forthwith. 22 Yahweh God fashioned the rib he had taken from the man into a woman, and brought her to the man. 23 And the man said: This one at last is bone of my bones and flesh of my flesh! She is to be called Woman, because she was taken from Man.

The specialists would say that the Bible contains different traditions and that chapters of Genesis were created from various myths. Anyway, as a result we may get a feeling that God at first created man and woman, then the lady got lost, and so God gave Adam the other one, this time made from his rib. And that opens a way to interesting speculations.

Well, the story is simple: Lilith and Adam were supposed to be the first people, created together. In these circumstances she did not want to accept that she should obey her husband, she refused to submit to him. Adam on the other hand did not want to accept the idea of a partnership, so Lilith simply left him. He ended up alone and God decided to give him another woman: this time created from his flesh, undoubtedly of the inferior position. Meanwhile Lilith got jealous; perhaps she thought that Adam would fight for her, or even change his mind for her and accept their equality. But he preferred to get another wife, this time less independent and willing to obey him. Lilith decided to take a revenge (that’s what happens if a strong and independent woman gets angry!) and became evil to condemn her rival and the ex. We must admit that she did her job well; apparently Eve was not only dependent, but also naïve, quite easy to convince to do something stupid. Of course, it was not that difficult to convince Adam as well, but let’s face it: what are the chances of a guy against two women? 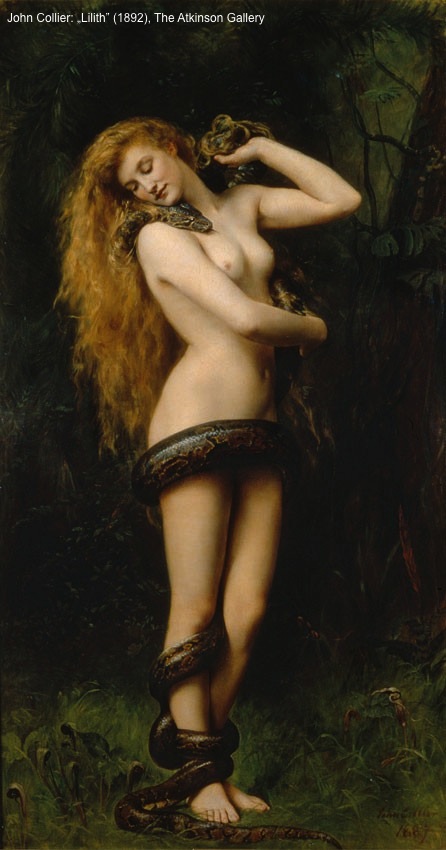 To sum up: according to this version the fall of the men started with a toxic ménage à trois. In some way Adam is to blame: it all started with his denial of the idea of partnership between men and women. He exchanged an independent woman into a submitted one and then got involved in some evil pleasures with both of them. Frustrated Lilith turned into a snake-woman (not a woman with the cats as the stereotypes would suggest) and dragged everyone into the evil that consumed her. The sin of the humanity was finally redeemed by Christ, but he had to be born by the Virgin. Apparently it was safer to fix that mess without involving another man in the process.