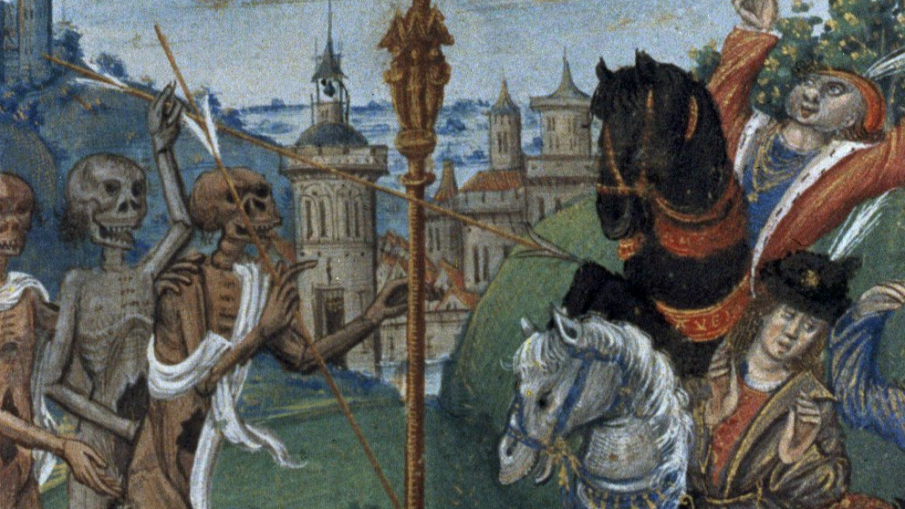 All Saints’ Day is the special time of year when we focus on thinking about our loved ones who passed away. It is more or less the same time of year when the feasts of the dead were celebrated in pagan times (the traditions that later turned into Halloween). It is the turn of the Autumn and the Winter: the time when the Nature is dying, to rise again in Spring. The days are shorter, so we are longer surrounded by darkness, which associates with the death. The wind is blowing, it’s raining and it’s cold, so in general we feel quite depressed. It seems a good time to have a look at an interesting medieval legend related to the problem of the death. It was quite popular in the late Middle Ages; interestingly, its depictions seem to be rather merry. 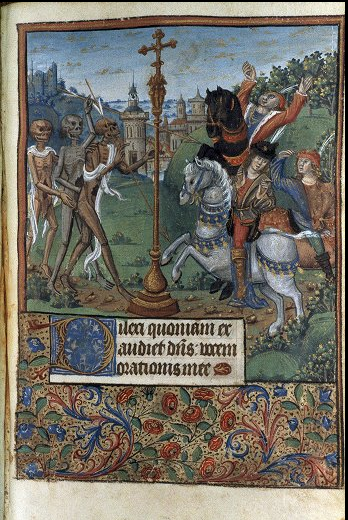 The starting point for this entry would be the miniature from the French manuscript of Book of Hours, dating back to the second half of the 15th century. It is now kept in the Bodleian Library in Oxford (MS. Rawl. liturg. e. 20). Books of Hours were the prayer books for the laity; they derived from the Breviaries and were extremely popular in the late Middle Ages. They contained, among others, also the prayers for the dead (Office of the Dead, lat. Officium Defunctorum). It was usually decorated with the depictions of a funeral, sometimes with the skulls and bones in the margins. It might has also been, as in this case, the depiction of the Legend of The Three Leaving and the Three Dead. Or all together, as in the other Book os Hours kept in Oxford (MS. Douce 93): 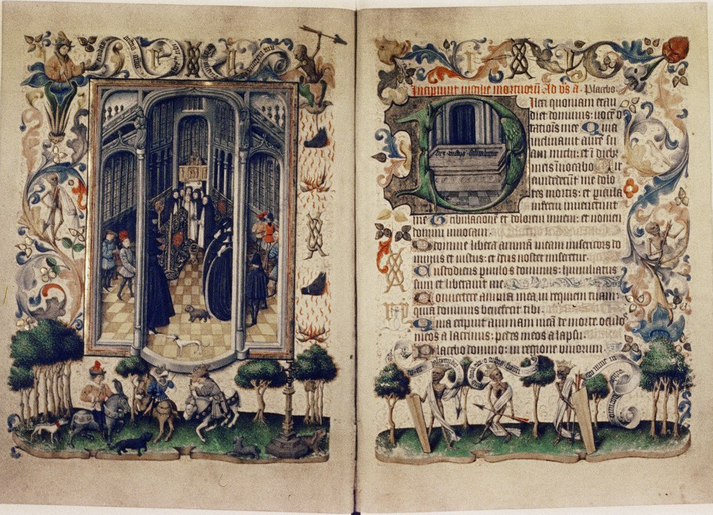 But lest’s get back to the Three Living and the Three Dead. The legend was probably created in 11th or 12th century, but the oldest survived text dates back to the 13th century (and it is French). It became especially popular in the 15th century: various language versions were written, and the illustrations appeared in the manuscripts, or on the walls of the churches. 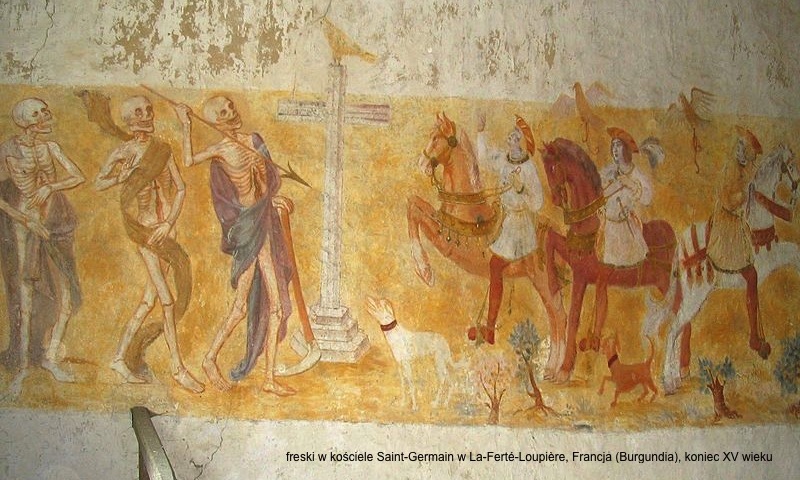 The legend is not very complicated: as you probably assume, it tells about the meeting between three alive men and three dead ones. The living were three young rich men (in some versions, they were the kings): wealthy and healthy, not thinking about the death. The three dead also used to be rich: they were either the kings as well, or the king, the bishop and some other wealthy man. Additionally, they were sometimes described or depicted as the corpses in the three stages of decomposition. One would be quite a fresh cadaver (sometimes with some maggots on it), the other would be in the state of the advanced decomposition (consumed by the maggots as well) and the last one would be just a skeleton. And the worst thing was, of course, that those dead were walking and talking, which really frightened the living ones. 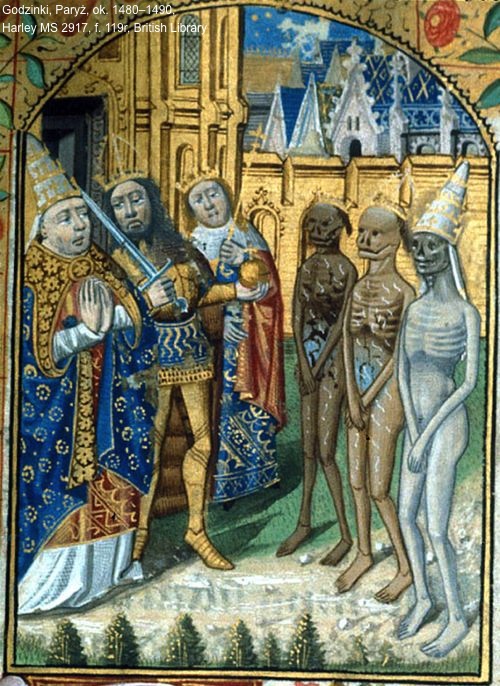 The story of course goes with the moral: the dead tell the story of their lives, when they used to be rich and happy, and it ends with the sentence: We were once what you are now, / what we are now you will be! For the three living the meeting is a warning that shows them how passing are all the earthly goods. 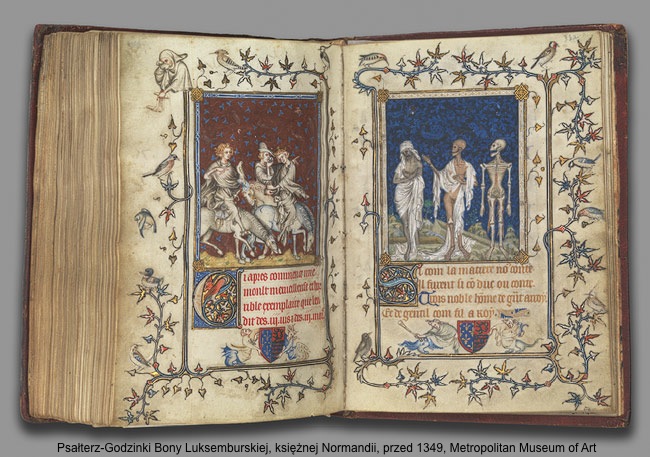 Of course, the literature and the art of Middle Ages (and other ages as well) was full of the motifs of Memento Mori. Death is inevitable and that fact has been quite commonly depicted in various forms. However, the Legend of the Three Living and the Three Dead is different than all the other depictions like Danse Macabre or The Triumph of the Death. That is because in those latter cases we are dealing with the allegory: we can see the Death depicted as a corpse or a skeleton, but we understand that it is just a personification. Meanwhile, the story of the Three Dead is touching one of the deepest fears of the humanity: it shows a situation when alive people actually meet “living” dead, the zombies. We miss our loved ones who passed away, but we would not in fact like to see them getting out of their graves. As was brilliantly noticed by the anthropologist Ludwik Stomma, our every-year visits at the cementers are in fact a kind of ritual that is supposed to ensure us that the dead keep lying in their coffins in peace. We light the candles, we place the fire on the graves – and the fire has an ancient meaning of purification. It builds a mystical barrier and somehow we feel sure that it keeps all the dead in their world. It’s not that we don’t miss them… we just are not looking forward for the Last Judgement that much. 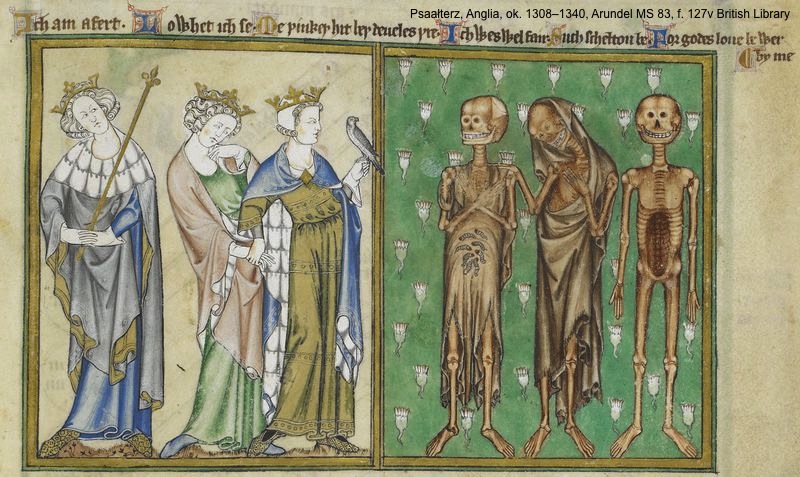 Finally, it should be stressed once again that the illustrations of the legend of The Three Living and the Tree Dead usually look quite merry. The corpses are smiling and the fear of the living is depicted in a grotesque way. It is not a coincidence; this is how the natural fear was tamed. Showing the death or the devil in a funny way weakens the fear of them; that is also the source of the children’s Halloween masquerades. And that bears an ancient wisdom: if we are afraid of something that is inevitable, maybe we should try laughing at it? Well, they obviously laughed a bit in the Middle Ages. And we must remember that the average life  expectancy was around 35 years back then. But I have the funny feeling that they managed to deal with those fears much better than we do now. And they did not have the antidepressants, the psychotherapies nor the sleeping pills.