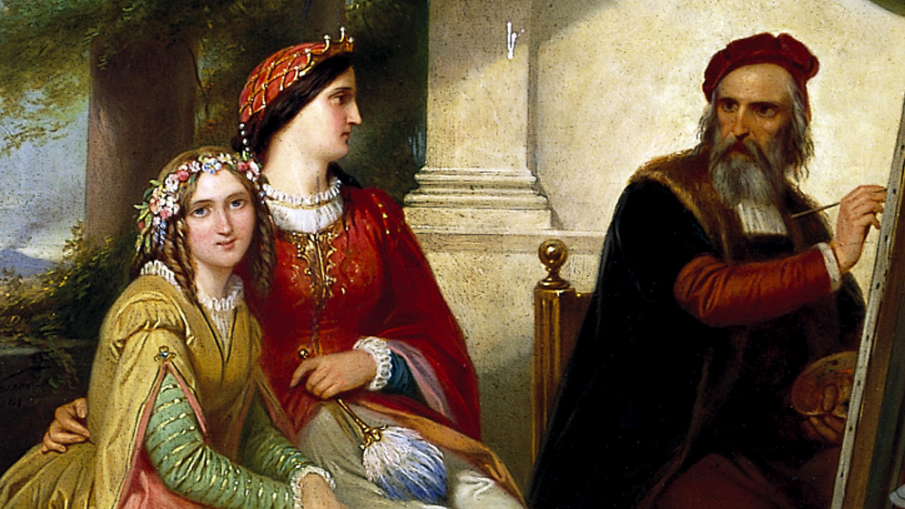 Lately I’ve been enjoying working as a researcher, analysing the continental pre-1900 paintings from the collection of the Art Gallery in York. So, let me share my thoughts on one of those paintings here. I actually think that it is possible to interpret it in a slightly different way than it was done in the official catalogue of the Museum.

The painting is catalogued as YORAG:159 and entitled “Ribera and his family”. It is signed and dated: it was painted in 1861 by a Belgian painter Bernard Weiser (born 1822, died in 1860’s). The picture is quite typical for a 19th century academic painting; it’s subject matter is an everyday life scene placed in the past, which in this case is the depiction of the baroque painter and his family. The depicted painter is José de Ribera (1591–1652); he was born in Spain and his painting shows the influence of Caravaggio in its dramatic chiaroscuro and realistic forms.  De Ribera probably had a chance to meet the Caravaggionisti in Rome, although he quickly moved to Naples, where he stayed for good. By the Italians he was called Jusepe de Ribera or Giuseppe Ribera, as well as Lo Spagnoletto (“The Little Spaniard”). 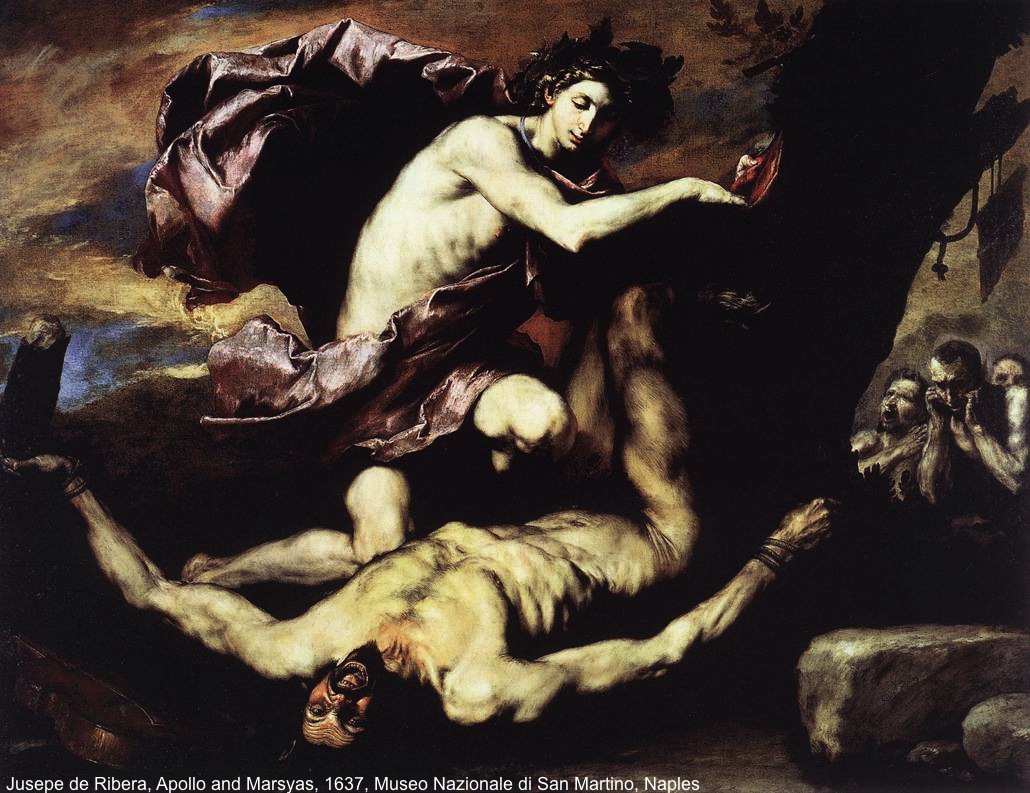 Bernard Weiser depicted de Ribera as an old man painting two women; in the background we can see smoking Vesuvius. The painting has been given to the York Gallery in 1887, as “Ribera and his daughters”. We also know that it was exhibited in the Crystal Palace in London in 1864 (that was only 3 years after the painting was completed!) as “Spagnoletto and his daughters”. Nevertheless, current catalogue states that “despite the traditional title, Ribera and his Daughters, it would seem that Ribera is shown painting his wife and daughter, who were frequently identified as his models”. Is it really possible that already 3 years after the painting was completed the viewers didn’t know exactly what they were looking at? 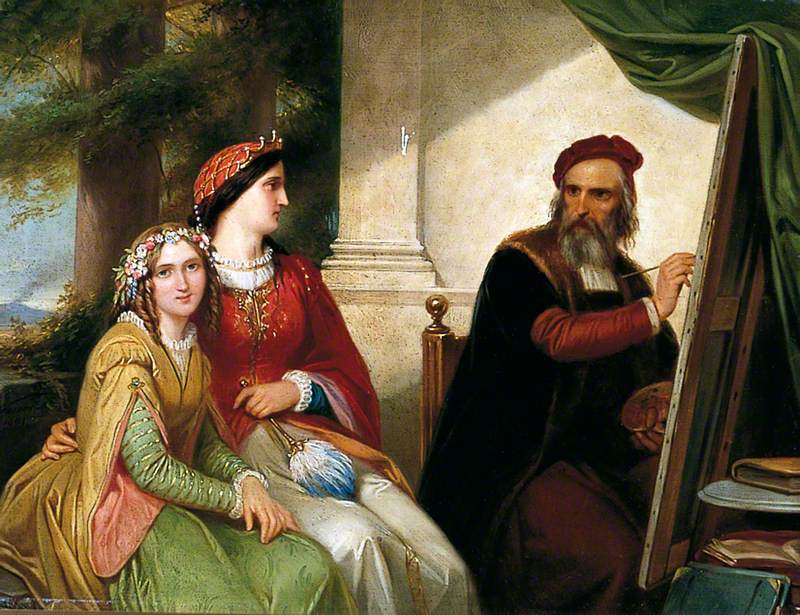 As a scholar specialising in historical field, I must stress that we should never underestimate the archive information. I am absolutely sure that in 1864 the painting was exhibited in London with the correct title. When I looked into the documents in the files kept in the museum in York, I found the handwritten note that dates back probably to 1960’s or 1970’s. It shows that whoever worked on the current catalogue back then, decided to change the title due to the information from some old biographical dictionary, which claimed that de Ribera had only one daughter. In fact, de Ribera had three daughters: Margarita (born 1630), Anna Luisa (born 1631) and Maria Francesca (born 1636). But does it matter if the women depicted in the painting are daughters or a daughter and a wife? Well, I think it matters a lot. Because the painting is not only a family scene; it also contains the hints of a future scandal.

José de Ribera married Caterina Azzolino, the daughter of Neapolitan painter. She was born in 1601, so she was 10 years younger than her husband; clearly the age difference between the people in the Weiser’s painting is much bigger. The Ribera and his wife had 6 children, but the first one was born 11 years after their marriage, so neither of them was a young parent. In fact, I assume that the scene in the painting is happening in 1647. The older daughter, Margerita, had been married for 3 years then (and she has her head covered, as a married woman); her husband was a respectable judge Giovanni Leonardo Sersale, so her social position was secured. Maria was 6 years younger and we can see her wearing a wreath of flowers in her hair, as she is (still) an honorable 11-years old virgin. In 1647 de Ribera was 56, which also fits to this depiction.

If it was an ordinary family scene, it would be just boring and would not meet the expectations of the 19th century viewers, as they wanted to have some anecdotes and scandals depicted in the historical paintings. The Academic artist was supposed to complete a complex historic study on the subject he wanted to depict, at least that was expected. So I am quite convinced that Bernard Weiser read de Ribera’s biography in the book Vite dei Pittori, Scultori, ed Architetti Napolitani by Bernardo de’Dominici (1742). That text is not very flattering for de Ribera; in fact there are some nasty incidents described, including a scandal which was confirmed in other sources. And I think that smoking Vesuvius is actually anticipating that particular scandal. 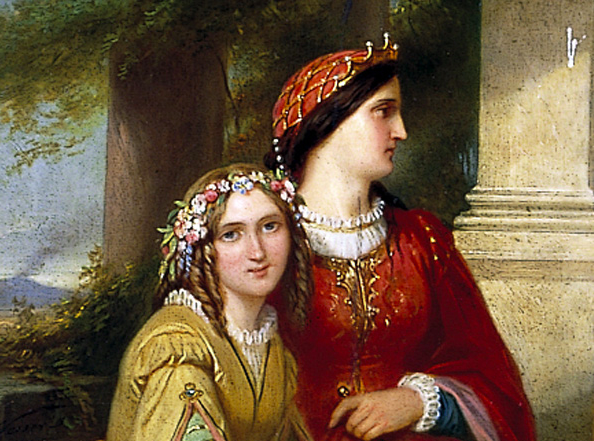 Why did I at all assume that it is all placed in 1647? Because of the Vesuvius! The volcano did tot actually erupt that year, but something else happened: the tumults in Naples, which were promptly compared to a volcanic eruption by local historians. It was an uprising against Spain (Naples became part of the Spanish Empire in 1504), and to suppress it the army was sent, under the command of Don Juan José de Austria, the illegitimate son of Philip IV of Spain. De Ribera actually even painted the portrait of Don Juan, who apparently was an often guest in the painter’s house. Finally the scandal happened: Don Juan seduced de Ribera’s daughter, Maria. She lost her virginity in the arms of the charming royal bastard and as a result she ended up with the bastard of her own… She gave birth at the age of 14 to a baby girl, who was brought up in the convent of the Decalzas Reales in Madrid and later became a nun there, known as  La Serenissima Sor Margarita de la Cruz y Austria. In the documents she was referred to as a daughter of Don Juan de Austria and a grand-daughter of the painter Ribera. She died in 1685. 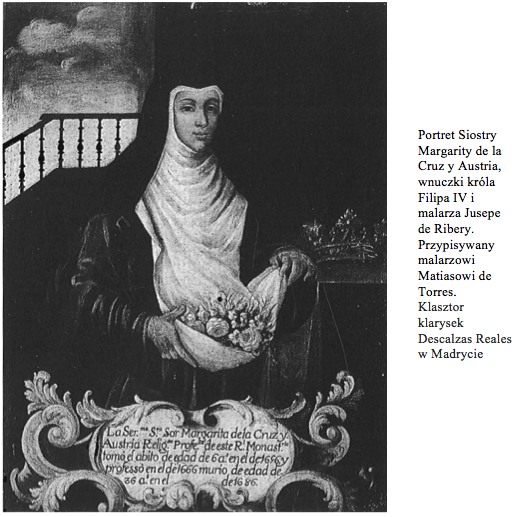 Now we get the whole picture, don’t we? It is not just a family scene placed in the past: it is a story about upcoming scandal, which is always exciting. We look at the naïve smiling girl and we see the smoking volcano behind her: that makes us think of the destructive power of passion that may quickly ruin a good name that had been built for years. Soon, dear Mary, you will not be able to wear a wreath anymore, the shame will take away your smile. What a contrast to the respectable older sister! These were probably the thoughts of the audience at the exhibition in the Crystal Palace, exactly 150 years ago. And today it is a fun for the historian of art, and a satisfaction of finding out what the artist might have meant.

For further information on de Ribera’s biography and the documents related to all described above, check out the article: R. Cohen, JUSEPE (GIOSEPPE OR GIUSEPPE) DE RIBERA. An alternative view of his origins, apprenticeship, and early works, which is available on-line.