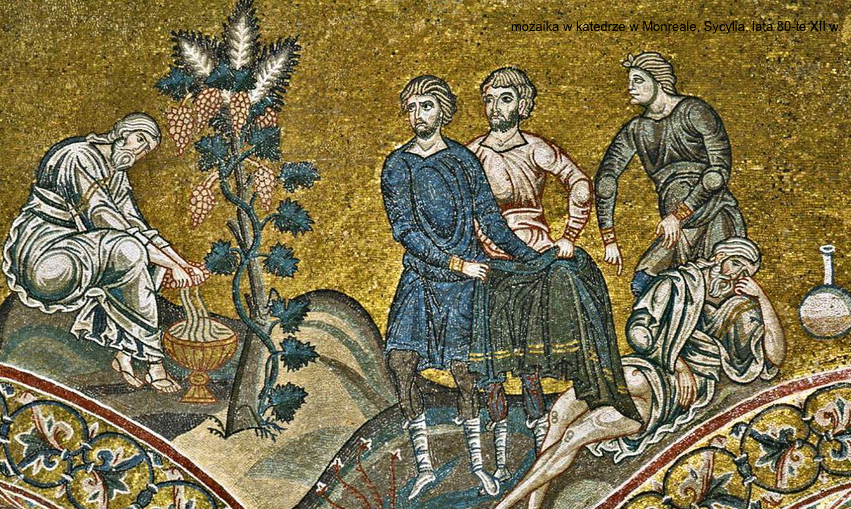 September is the month of the grape harvest: it is the time of hard work but also the time of fun in every wine-producing region. It is still not the time for the new wine, as that shows up in November, but it is already possible to produce  a fermented freshly pressed grape juice (must). It is a drink that is called burčák (in Moravia), burčiak (in Slovakia) or Sturm (in Austria); it is very tasty but also very insidious. It tastes like a juice but it keeps fermenting in your stomach and suddenly goes to your head. Also, it might blow up the bottle if you close it too tightly.

So, on the occasion of the month of grape harvest and burčák, today we will talk about the episode of an alcohol abuse described in the Bible. It is called “Drunkenness of Noah”. 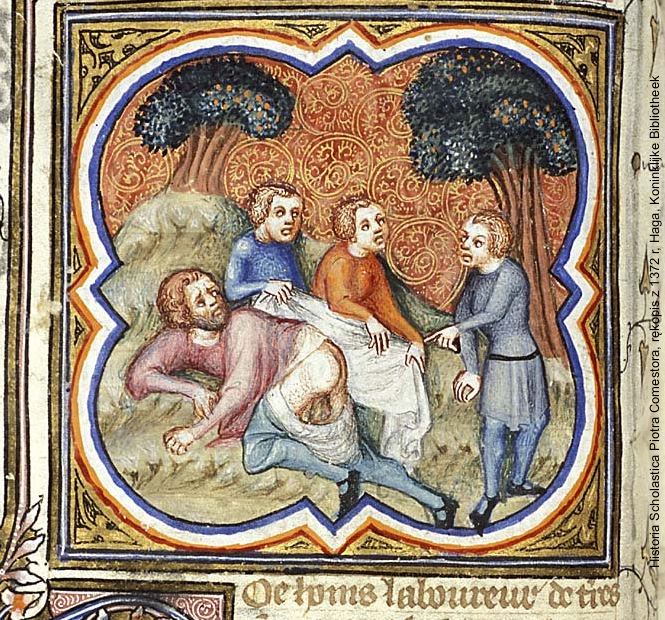 Noah is mostly famous for building an Ark that saved some people and animals to repopulate the Earth after the Flood. And Noah (as the Bible says) was also a first tiller of the soil: he planted a vineyard and produced the first wine. It is said that when you plant a new vineyard you need to wait few decades before you get a decent wine of it, but that was not a problem for Noah, as the Bible says that he lived for 950 years. Anyway, he did produce the wine, but he unfortunately did not know how it works. As a result of drinking too much he suddenly fell asleep in quite a compromising position: he was laying naked in his tent. His son Ham walked in and saw Noah’s nakedness. Ham did not behave properly and respectfully: he went to tell his brothers what he saw, and probably mocked drunk Noah on this occasion. Medieval depictions show quite precisely which part of Noah’s body was actually naked: 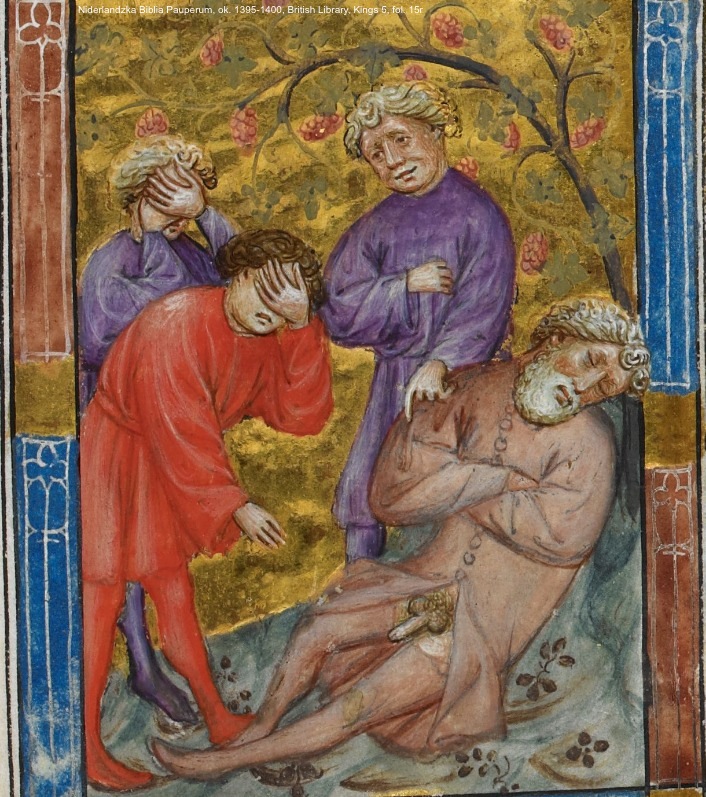 Ham’s brothers, Shem and Japheth, had a lot more respect for their father and they knew how to behave. They took a coat and walked backwards into the tent, covering their father without seeing him naked. Finally Noah woke up and we can assume that he did not feel very well. When he found out about his younger son’s behavior he got angry and cursed his descendants (well, hangover never puts us in a good mood!). He actually cursed Ham’s son, Canaan: “Cursed be Canaan; a slave of slaves shall he be to his brothers.” (Genesis 9:25). That is actually how the Jewish tradition explained the provenance of the Canaanites: the people the Israelites considered inferior because they were supposed to derive from Canaan. In Middle Ages it was believed that Muslims are the descendants of Canaan, and the Polish nobility used to understand the name of Ham as a common name for the peasants. Today in the Polish language that Biblical name became an insult: that is how we call someone who is rude. Most of the people doesn’t even know anymore that the term comes from the Bible. 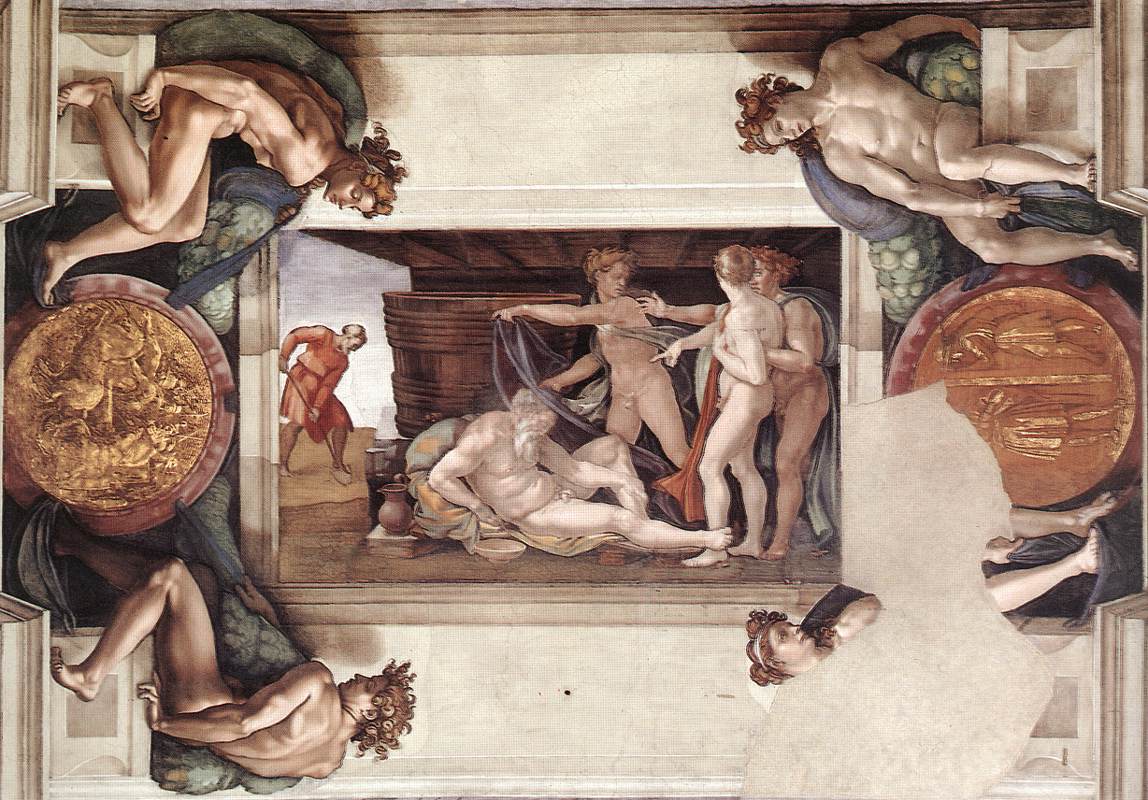 One of the most famous depictions of the Drunkenness of Noah is the fresco in Sistine Chapel painted by Michelangelo (Vatican, 1508-1512). Unfortunately, some of the idea of the story is lost there, as Michelangelo (as usually) depicted everyone naked, so we don’t see the difference between Noah and his sons. Still, we can see the gesture of mocking; according to Saint Augustine, mocking of Noah is a prefiguration of later Mocking of Christ. Of course, the main difference is that Christ did not abuse alcohol, even though he was able to turn water into wine. We should never let ourselves get so drunk that we pass out, but also we should not mock those, who did that. Apparently, we might end up with a curse.