Home » Blog » Saint of the dumplings and the others
Sun17

Saint of the dumplings and the others 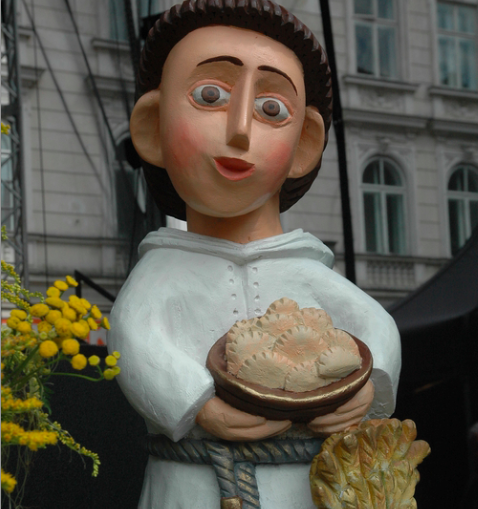 Saint Hyacinth has his feast on August 17th, and this year that is also the last day of the Cracow Dumplings Festival. The dumplings are probably the only Polish dish that has its own patron saint! So today we will talk about Saint Hyacinth, and others. 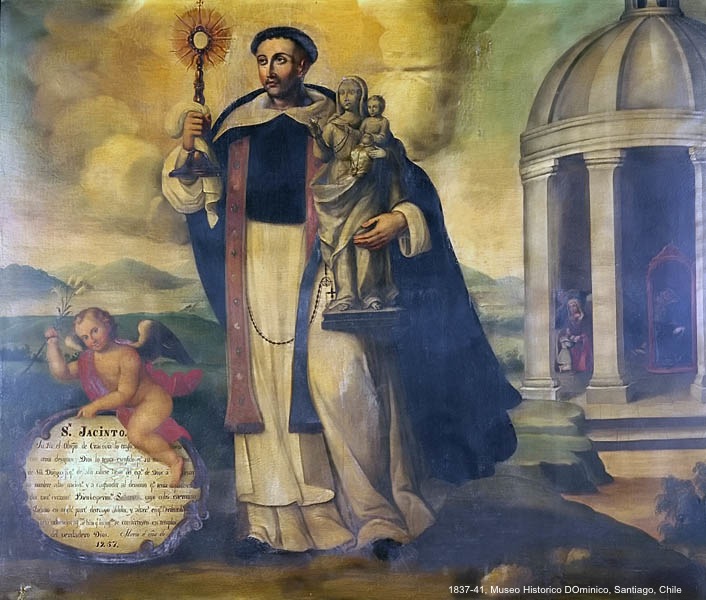 Saint Hyacinth Odrowąż is said to be born in 1183 and he died in 1257. He was born in the noble family of the Odrowąż, and one of his relatives was Iwo Odrowąż, the bishop of Cracow. Hyacinth probably studied in Rome and Bologna and he was supposed to be lucky to meet Saint Dominic, so he decided to join the newly established Order of Preachers. It is said that Hyacinth, Czesław from Sandomierz and Herman the German were the last three friars accepted to the order by Saint Dominic himself. Bishop Iwo Odrowąż decided to bring the Dominicans to Cracow in 1222: he gave them the church of Holy Trinity and Hyacinth became the abbot. The oldest biography of Hyacinth that is known today dates back to the 14th century and was written by the friar Stanislaw, but he probably used some earlier sources. As it usually is, the medieval legends of the Saint Hyacinth created many tales about his miracles. He was usually depicted with the monstrance and the figure of the Virgin with the Child, as he was supposed to save those two things from the burning church in Kiev. But there are also other miracles, and it seems that Saint Hyacinth was a person that had a lot of empathy for the common citizens of Cracow. Once he brought a drowned man back to life, another time he raised a dead cow, and once he also raised the crops that were crashed by the hail. And finally those dumplings! The legend says that after the Mongol Invasion in 1241, when Cracow was quite destroyed, Hyacinth fed hungry Cracovians with the dumplings. There might be a grain of truth in the legend: probably the Dominicans saved some stocks of cereals in their monastery and kept it save during the invasion. Saint Hyacinth was so good that he decided to share the flour with the citizens instead of keeping it for his friars. Of course those dumplings could not be the most popular kind today, called “the russian dumplings”, as they have potato filling, and the potatoes were not known in Europe until the end of the 16th century. But they could have been filled with meat, maybe of that cow Saint Hyacinth raised earlier? 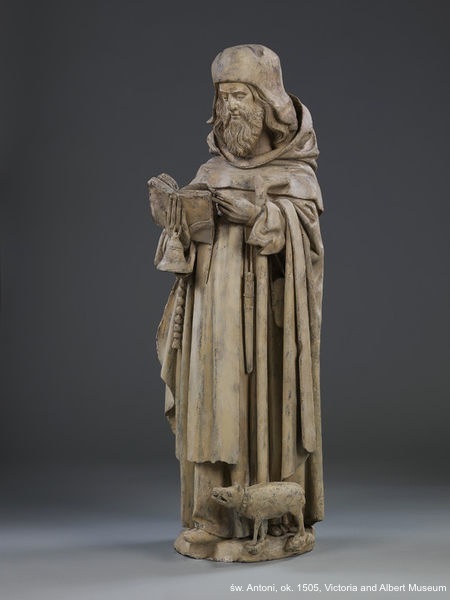 It is quite a rare situation when the dish has its own patron saint; much more often we can find patron saints for particular products. For example, Saint Anthony the Abbot is usually depicted with the pig. It is a strange attribute because it was very common in the depiction of this saint since Middle Ages, and on the other hand medieval legends don’t explain the origin of this attribute. Saint Anthony was an Egyptian hermit who lived at the turn of the 3rd and the 4th centuries. According to the legend he faced a series of supernatural temptations during his pilgrimage to the desert: he faced the impure forces. Some scholars think that this is the source of the depiction of the pig by Anthony’s feet, as the pig is considered an impure animal in many cultures. On the other hand, there were various diseases that were called “Saint Anthony’s fire” and some of them were supposed to be cured in Middle Ages with the pig lard (in Britain it was mainly erysipelas that was called “Saint Anthony’s fire”, while in France or Germany that was a name for the ergotism). Later common legends of course added new tales and basing on the images of Saint Anthony they figured that he had to be a swineherd when he was young and that he had a pig as a pet. As a result of that, Saint Anthony became a patron saint of the bacon. 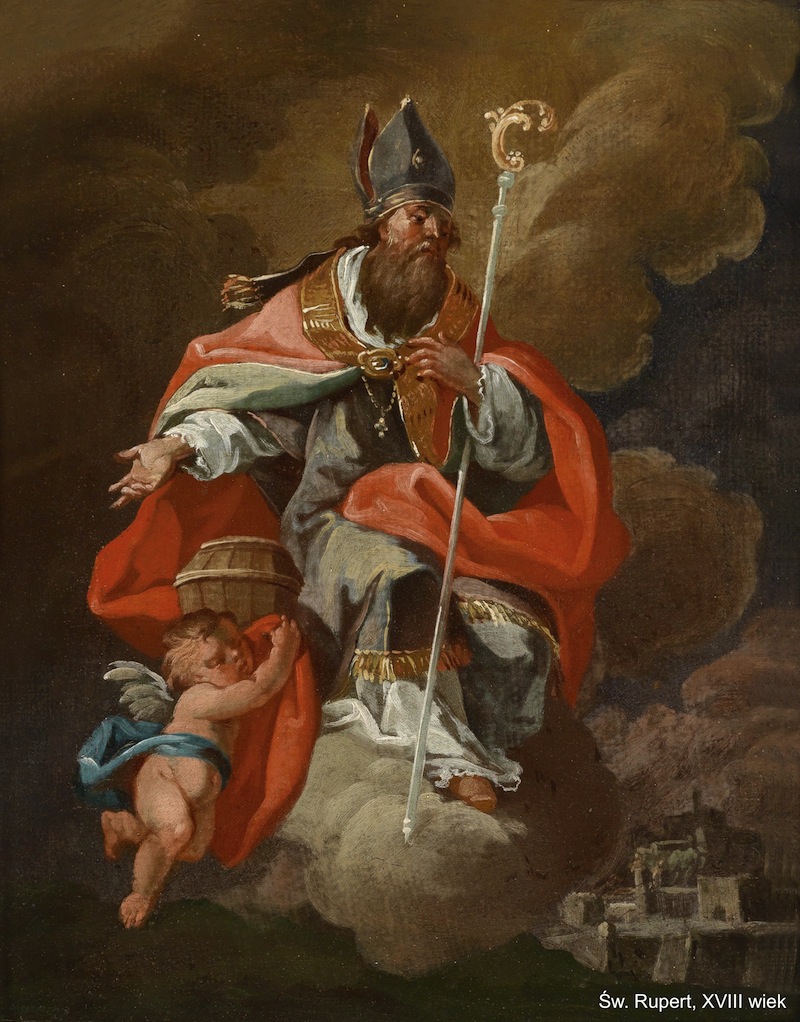 One more saint worth mentioning here is Saint Rupert (Ruprecht), who is maybe a bit less common saint. He was depicted with a barrow, but not with the beer, but with the salt. One of the oldest salt mines in the world is located in Hallein, that is a city near Salzburg (already the Celts used to get the salt from it). It was a great treasure and Saint Rupert was the one who appreciated it. He lived at the turn of the 7th and the 8th centuries and he was a first bishop of Salzburg. According to the tradition he was the one who decided that the city should be called Salz-Burg, which means Salt Castle. The salt was Salzburg’s most precious treasure and a source of a main income, as salt was very pricy in the times when there were no refrigerators (the salt helped to keep the meat eatable for long time). The citizens of Salzburg still consider Saint Rupert their patron and the veneration is so strong that even nowadays all the students there have a day off school on Saint Rupert’s Day.

Not all of the saints were martyrs, not all of them lived ascetic lives, and some are even patrons saints of a good food. We shall though remember that gluttony is one of the deadly sins and even the best food might hurt us if we eat too much. And if we do, it might turn out that the only saint left for us is Saint Jude Thaddaeus, a patron of lost causes.