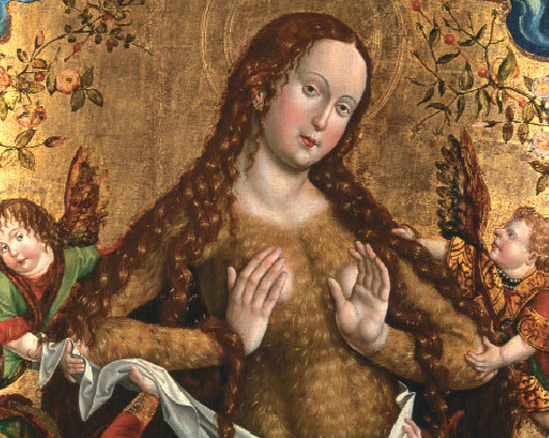 The 22nd of July is coming and for the most of the Poles who still remember the time of communism in Poland it is the day that used to be an official holiday. The gouvernment of Polish People’s Republic tended to open important investments on that day, like the roads or the buildings. But now those days are gone and we all may get back to celebrating July 22nd as it used to be for centuries, that is: a feast of the Saint Mary Magdalene. She was very close to Jesus, she stayed under His cross and she was the first one to meet Him after the Resurrection (see previous post, “Risen with the tools”). So why would be such an important saint depicted as covered with hair all over her body? 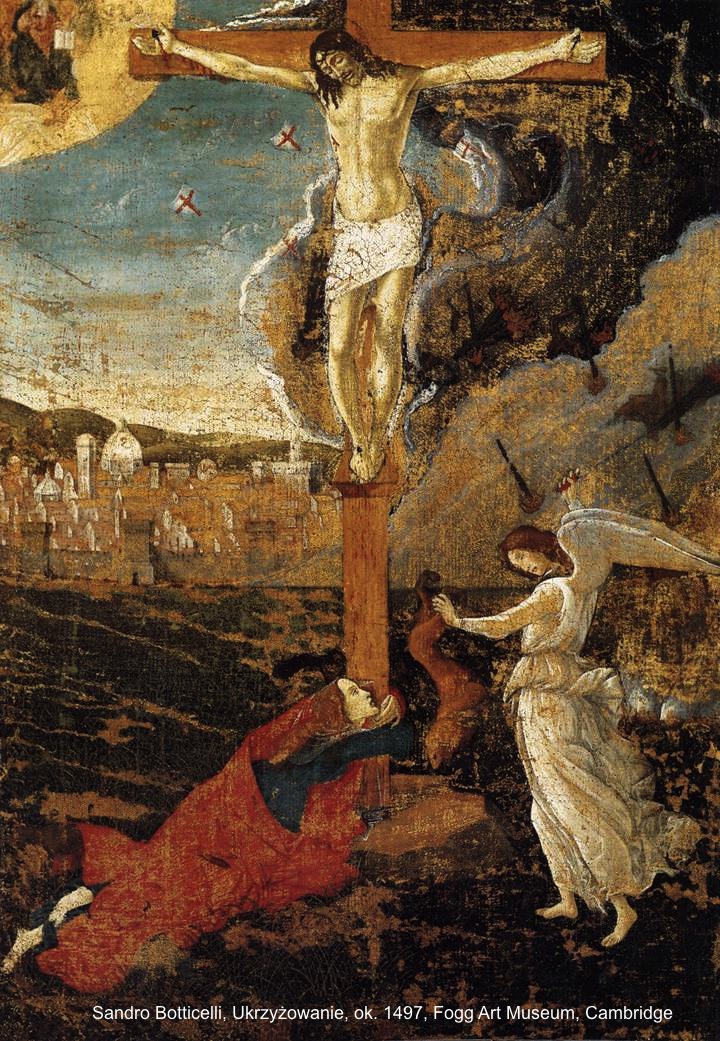 Mary Magdalene, that is Mary of Magdala, is sometimes called “the Apostle of the Apostles”, as she was the one who told the Apostles that Lord has risen. In fact, there are few different women described in the Gospels that merged into the person called “Mary Magdalene”. Saint Luke mentioned a woman, “who had a bad name in the town. She had heard he was dining with the Pharisee and had brought with her an alabaster jar of ointment. She waited behind him at his feet, weeping, and her tears fell on his feet, and she wiped them away with her hair; then she covered his feet with kisses and anointed them with the ointment.” (Luke 7:37-38). He also wrote that there were some women following Jesus, and among them there was “Mary surnamed the Magdalene, from whom seven demons had gone out” (Luke 8:2). Also there was another Mary, who was a sister of Martha and Lazarus. Saint John wrote, that “six days before the Passover, Jesus went to Bethany, where Lazarus was, whom he had raised from the dead.2 They gave a dinner for him there; Martha waited on them and Lazarus was among those at table. Mary brought in a pound of very costly ointment, pure nard, and with it anointed the feet of Jesus, wiping them with her hair; the house was filled with the scent of the ointment.” (John 12: 1-3). All those different women were merged by the tradition into one person, that according to all the Evangelists was standing by the cross when Christ was crucified. And as usually, also in this case the rest of her life was created by later legends

As a result, Mary Magdalene became known as a sinner (prostitute), a rich one (that’s why she could afford that ointment), from whom seven demons had gone out, and who stayed by Christ till the end and also who met Him after his Resurrection. The image of the repentant sinner stucked to her for good. I will not focus today on any controversial theories on the relations between Magdalene and Jesus (maybe some other time I’ll get back to that), but I would like to explain why she used to be depicted as hairy! 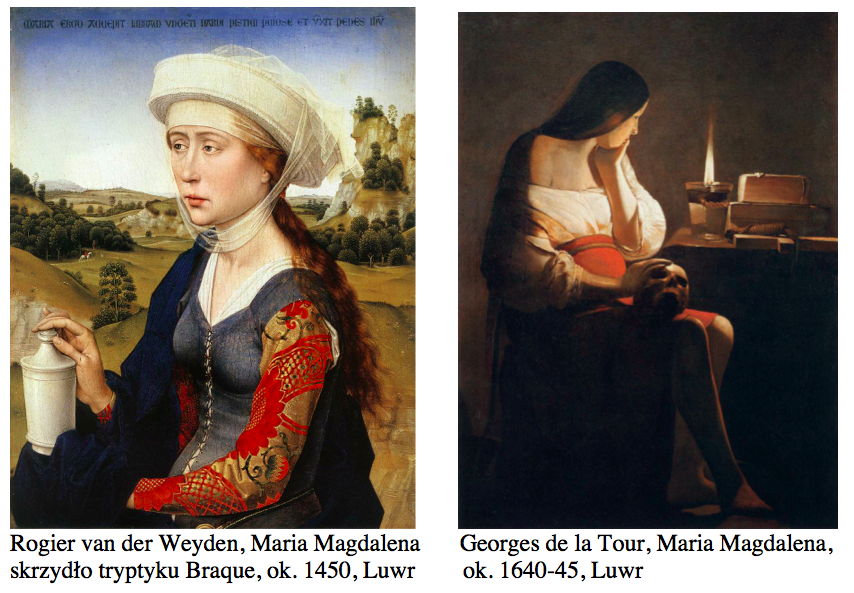 In the Middle Ages Mary Magdalene was usually depicted as a richly dressed, beautiful woman with the long hair, and with a vessel of the ointment as an attribute. In the times of the counter-reformation she used to be depicted mainly as repentant sinner and the scull became her new attribute.

So let’s get to the point: Mary Magdalene was supposed to be beautiful, not hairy. It is actually the result of depicting her according to the later legend. That legend said that after Christ’s Ascension Mary Magdalene decided to live on the desert as a hermit. She stayed there for so long that her clothes turn to dust and she would be naked if her long hair didn’t cover her nudity. Medieval artist understood it simply: if the hair covered her body that means that her body was covered with hair. Literally. 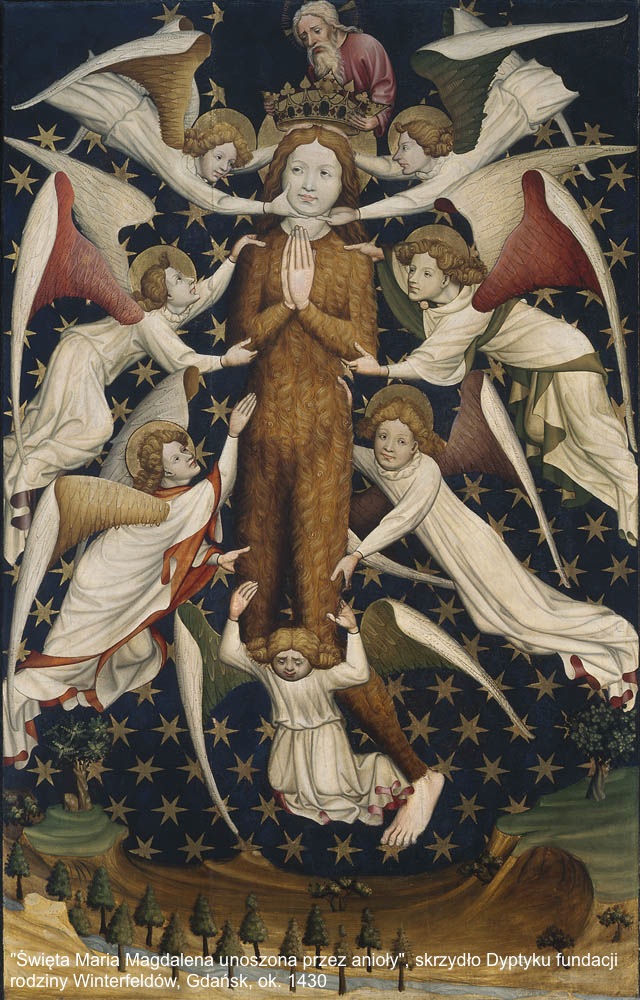 Anyway, Mary Magdalene still keeps her image of a tempting beauty. Of course, she looks weird as a hairy lady, especially in the middle of the summer when every creature should get rid of the winter fur. I wonder if any advertising specialist ever dares to create a commercial of the wax treatment in a beauty parlour using Mary Magdalene as a patron of the whole thing. 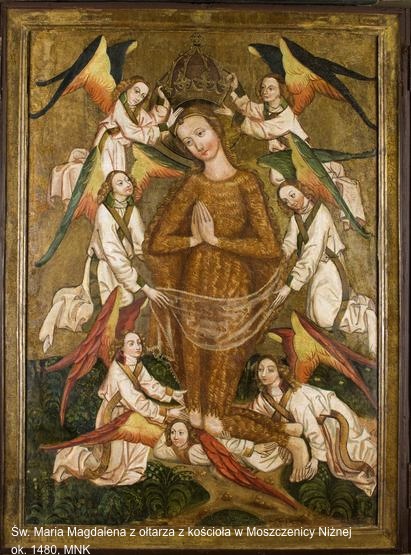