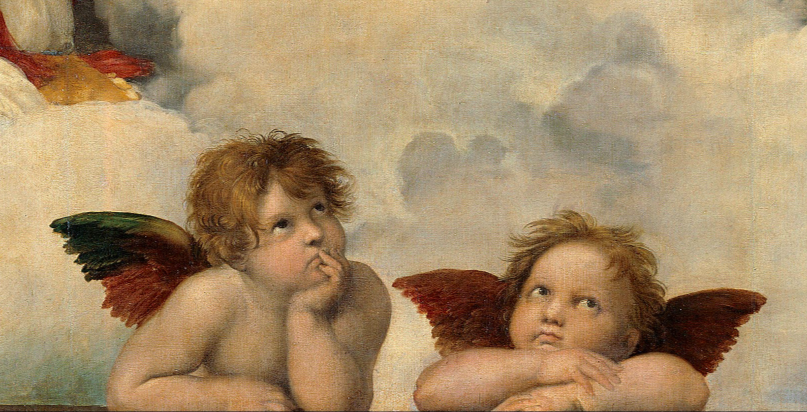 The two angels looking up is one of the most popular motifs of an old masters’ art, present in nowadays’ pop-culture. Everyone has seen those angels – and some people even know the rest of the painting. It is a Sistine Madonna, painted by Raphael. Have you ever had a closer look to find out what is actually shown in it?

Raphael, or to be precise: Rafaello Sanzio, is one of the most important painters of the Italian Renaissance. He was born in Urbino in 1483 and he died in Rome in 1520 – both days of his birth and his death were supposed to be the Good Fridays. He worked in Rome since 1508, hired by the Pope Julius II, for whom he painted the famous Sistine Madonna in 1512. 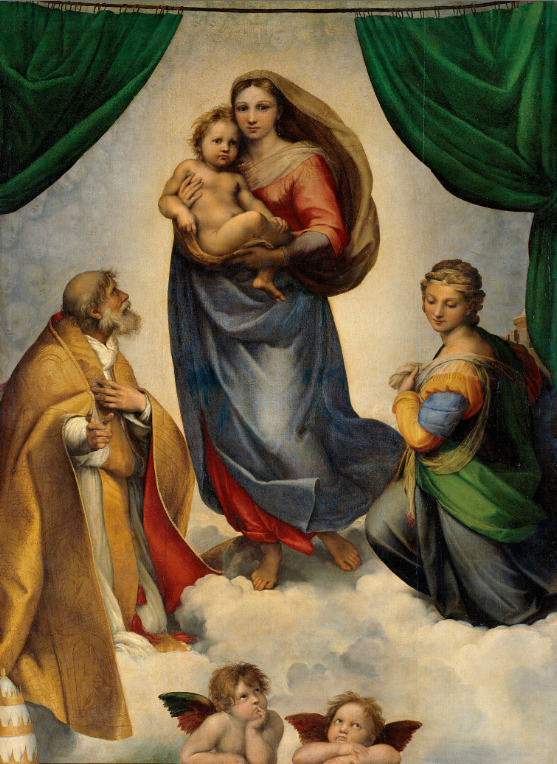 The painting used to be kept in San Sisto Church in Piacenza. It depicts Virgin with the Child flanked by Saint Barbara and Saint Sixtus, and the latter has a face of the commissioner, the Pope Julius II. The painting was commissioned in honor of his late uncle, the Pope Sixtus IV. It is possible that the painting was supposed to be placed above Julius’ tomb, so it would look as if the cherubs rested on their elbows on that tomb. There is a legend that says that the models for the cherubs were the children that were staring at the Raphael while he was painting. Another legend says that Raphael got inspired by seeing a couple of kids looking wistfully into the window of a baker’s shop. Either way, he managed to catch a specific eternal melancholy in the angels’ eyes; it is hard to decide if one gets such a look as a result of being enchanted by the art or as a result of being hungry…

The painting was bought in 1754 by Augustus III of Poland and taken to Dresden, where it is kept today. The painting survived the bombing of Dresden in World War II hidden in a tunnel in Saxon Switzerland; later it was taken by the Red Army. In 1946 it was placed in Pushkin Museum in Moscow and returned to Germany after the death of Joseph Stalin.

So, let’s have a look at the Virgin and the Child, close enough to see the expression of their faces. The Virgin looks sad and the Child looks terrified! They look as if they were seeing something horrible in front of them. Additionally, Saint Sixtus points in that direction as well. Are they afraid of us, the viewers? 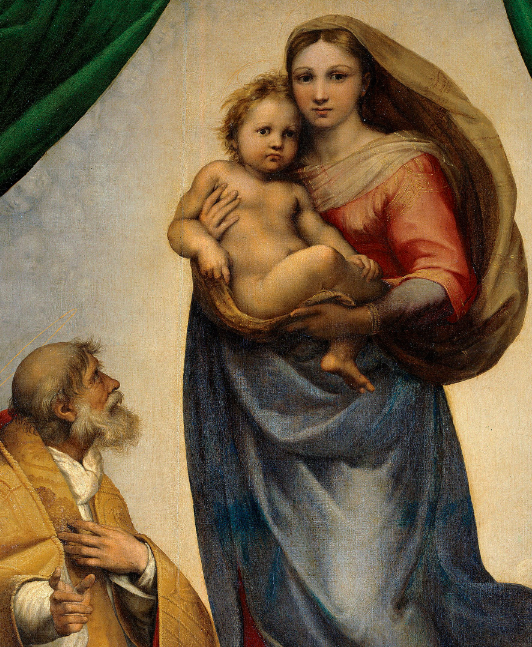 Well, that is not the case. The most probable explanation is that the painting was intended to be placed close to the image of the cross – for example, the crucifix placed in the middle of the church could be what the Virgin and Child were looking at. So, the Mother and the Child look at the prediction of the future Passion of Jesus, an that is why the Baby is scared and the Virgin i sad. It was actually popular in Middle Ages to put together the image of suffering Christ and the image of the Virgin and the scared Child, in the form of a diptych. 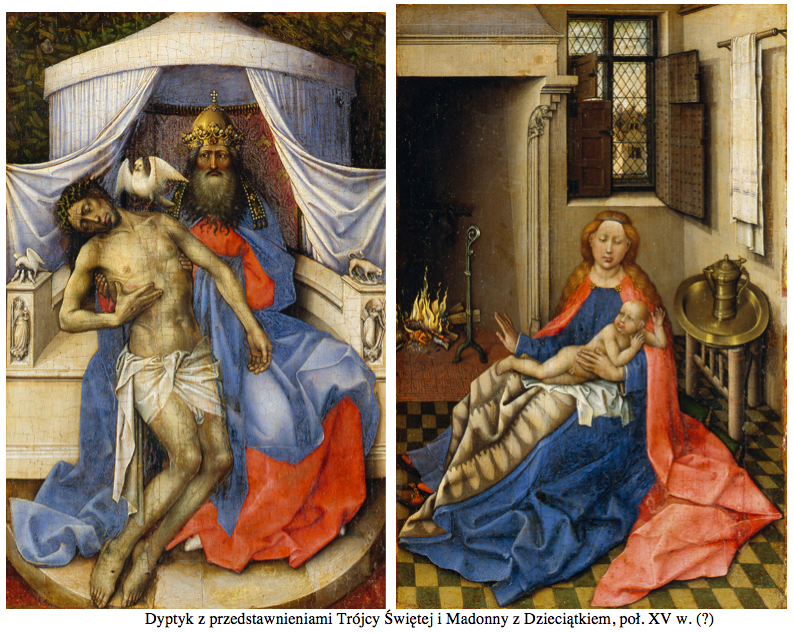 And what about the Madonna? Well, Raphael painted many Virgins, but this one might actually have a face of Margarita Luti, the painter’s mistress. Raphael was actually quite popular and loved by many ladies. Margarita was a daughter of the baker, she was his model and his mistress, and that is pretty much all we know about her. She might be depicted in the painting known as “La Fornarina”, although it is not certain at all. 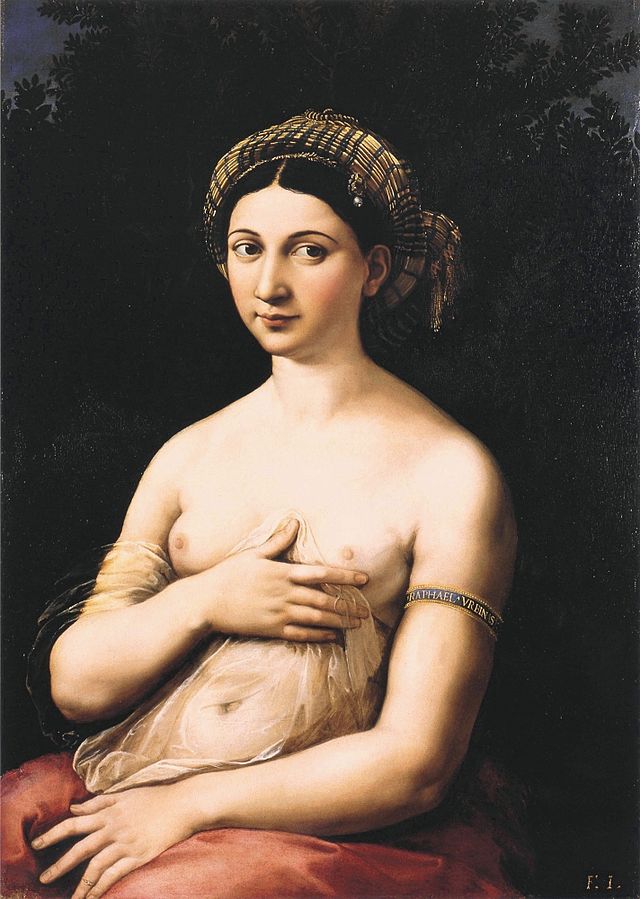 Anyway, the mysterious Margarita was supposed to be a reason of Raphael’s premature death. As Giorgio Vasari wrote, Raphael’s death was caused by a night of excessive sex with his mistress, after which he fell into a fever and, not telling his doctors what caused the fever, was given the wrong cure, which killed him. He died on the Good Friday 1520, at the age of 37.

So, it’s time to get tho the conclusions. First of all, if we get sick, we should not cover up the reasons. The knowledge of what have we done to get sick might help the doctors avoid misdiagnosing. Second of all: the excessive sex during the Lent might end up with the divine retribution. That is not the problem for now, as there’s a lot of time until the next Lent comes, and now we have a wonderful summer time, when the love tastes the best. Still, remember to be responsible, as it is still possible to get sick from too much fun, exactly like 500 years ago.