Home » News » I recommend you a great project!
Wed04

I recommend you a great project! 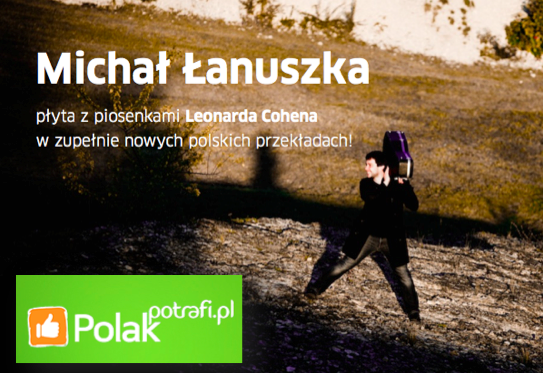 It’s a journey through the world of masculine emotions. Love, yearning, desire, tenderness, passion. I one short: the quintessence of the manly romanticism, which is not so common anymore…  Let’s create something that no-one did before: an album with the Leonard Cohen’s songs in brand new translations into Polish, completed by the voice and the guitars of Michał Łanuszka 🙂

The idea was created by Michał Łanuszka, and he is also the performer of this project (he made his debut in 2002). He is a singer posessing a low, warm voice, he is also a composer and a guitarist, as well as a voice-actor, a journalist and a radio broadcaster. He graduated Cracow Academy for the Dramatic Arts. He has already recorded two albums of his own: “Bieski idiota” (2009) and “A miało być tak pięknie” (2012), and he also performed in a project “Świat wg Nohavicy” (Gold Record).  The new translations into Polish were made by Michał Kuźmiński, an excellent writer and a journalist working in “Tygodnik Powszechny”. He co-writed the books “Sekret Kroke” and “Klątwa Konstantyna”. His translations are not only of the highest linguistic value, but also they are incredibly accurate. Michał Kuźmiński joins translating with studying Cohen’s biography and thanks to that he is able to catch the autobiographic references that Leonard Cohen placed in his lyrics.

I invite you to learn more about this project here:  www.polakpotrafi.pl/projekt/cohen – there is an English version of the information! You will also find there a demo recording of one of the songs. I also invite you to check out the Facebook site:  www.facebook.com/michal.lanuszka

We collect money necessary to produce the album – you can support it even with 1 PLN 🙂 It is very simple – you transfer the money on-line and the founds are collected in the project. If we manage to collect 15 000 PLN, then the project will be completed. If not – all the money will be returned to the donors!