Woman with a beard – it’s nothing new, actually! 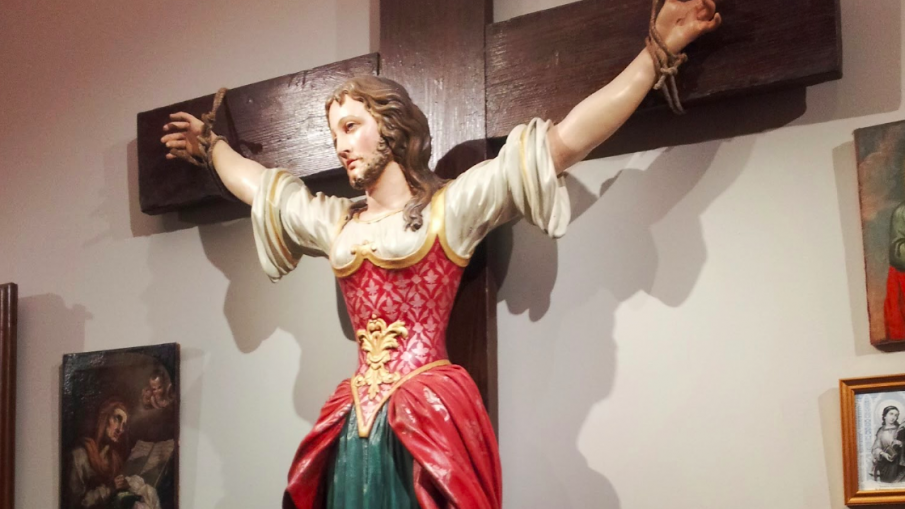 The woman with a beard has been quite a popular topic lately, so I decided to show you a similar issue from past centuries. It is an 18th century sculpture kept in diocesan museum of Graz and it shows a crucified woman with a beard. Although it may seem so, this motive was popular not only in Austria. Actually it is a Saint that used to be worshiped in the whole Europe. It is even hard to say what was her name. 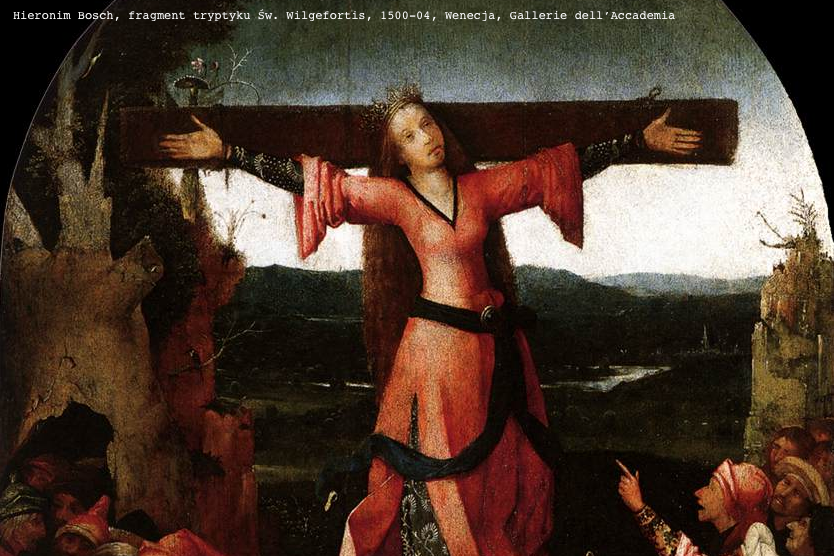 The medieval legend says that she was a Christian but her father wanted her to marry a pagan king. She wanted to stay virgin for Christ and she prayed to him to save her from the marriage. In answer to her prayers Christ gave her his own face – so she became a woman with the beard. The fiancé didn’t like her that way and refused to marry her, so her father got angry and had her crucified. She became a martyr and a patron saint for women who wished to be liberated from abusive husbands. 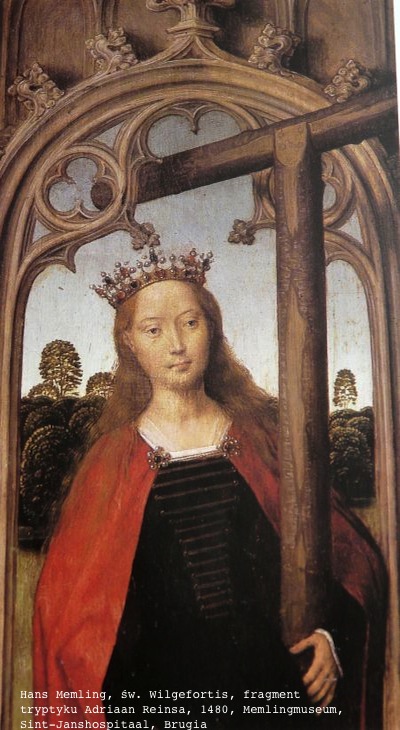 Her veneration was popular especially in 15th and 16th centuries, later her cult survived locally, especially in the Central Europe, so we have depictions form next centuries. But how such a cult started in the first place? Well, it may not surprise you when I say that the woman with the beard used to be… a man! 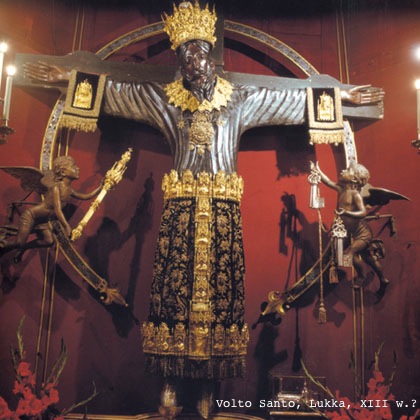 It seems that the source of the Saint Wilgefortis cult was actually an early medieval Christ on the Cross called Volto Santo and kept in Lucca (now only survived as a 13th century copy). It is a wooden figure of crucified Christ dressed in a full-length tunic (so-called colobium). According to the legend it was brought to Lucca in 742 A.D. (although it also may have been brought from the East during the Crusades). The type comes from the palestinian-syrian artistic circles, and as Volto Santo was widely worshiped, many romanesque copies had been created. Such a Cross used to be even in Cracow, in the church of the Holy Saviour. Interestingly, according to the legend Volto Santo was supposed to drop his golden shoe to a poor pilgrim, and the same legend is connected with the figure that used to be in Cracow. In Cracow the poor pilgrim was a fiddler. And, of course, another legend says the same about the image of Saint Wilgefortis, who also was supposed to give her shoe to a fiddler. It seems that the musicians are always the poorest part of the society, especially the fiddlers. Looks like it is not a good way to make a living – unless someone gives you a golden shoe… 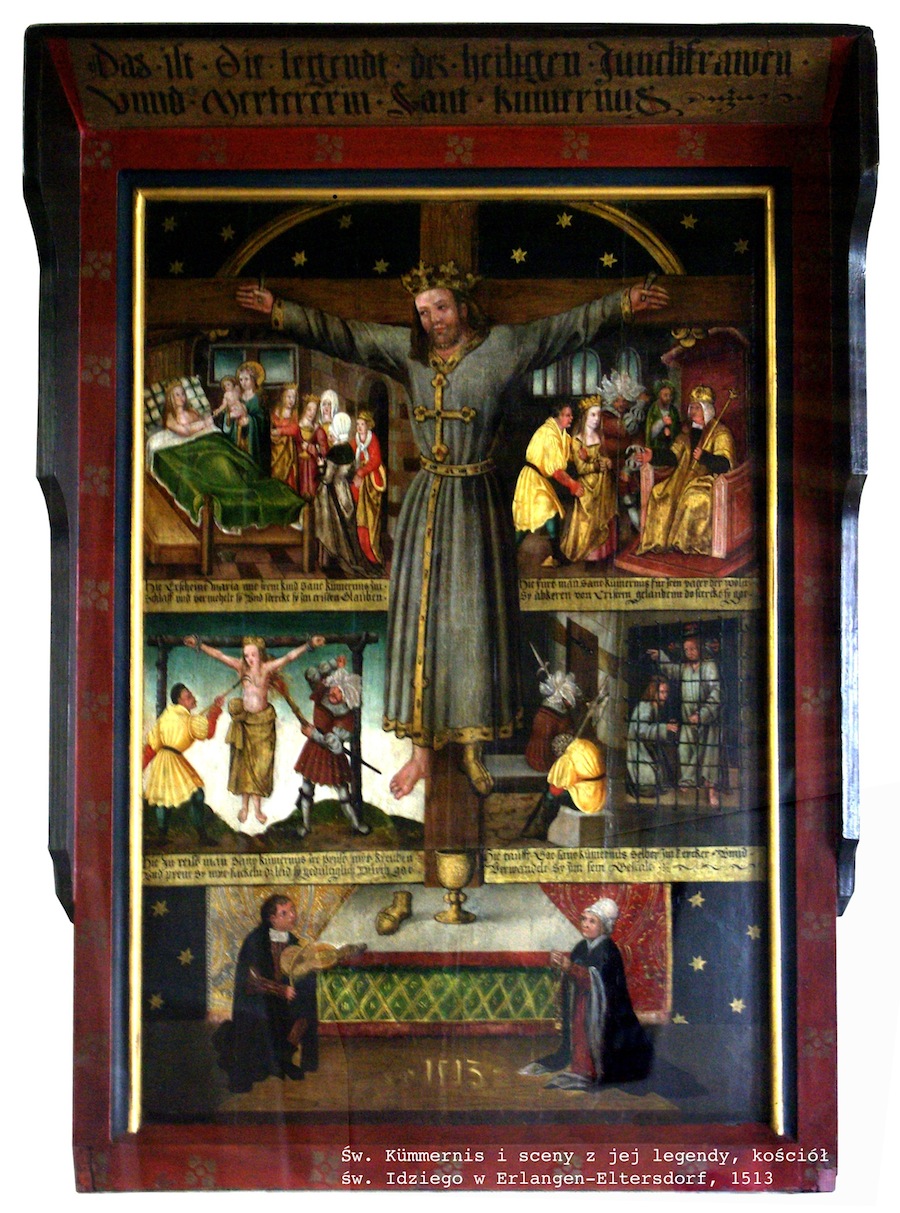 But why did Christ change into a bearded woman? Well, it is hard to say. It seems that in late Middle Ages, when Christ was always shown on a cross almost naked, the long dress on the older depictions was confused with the woman’s dress. And that’s how a new saint was created. She was worshiped mainly by women who dreamed about getting free from abusive husbands, and we need to remember that back then there was basically one way to achieve this goal: the husband should have passed away… Nowadays Saint Wilgefortis would probably be the patron of the divorces. Or an icon of LGBT.

Anyway, I would like you to stop thinking that Middle Ages was some kind of dark time. It was the time when no-one got upset about the woman with a beard.

For further information check out the book by Ilse E. Friesen, “The Female Crucifix: Images of St. Wilgefortis Since the Middle Ages” (2001).