Hairy parchment and other issues 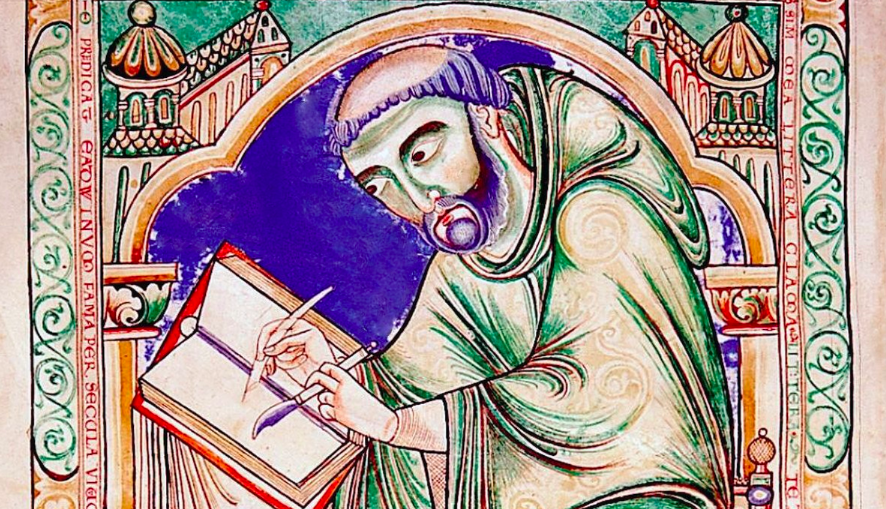 The heritage of Antiquity survived through the storms of the first millennium mostly thanks to the Benedictines. Saint Benedict, who established the Order, made the monks work – not only in the fields, but also in the scriptorium. The libraries in the abbeys were full of books, carefully copied by the monks. Creating a manuscript required quite a big effort: first the parchment (which was made of skin) was cut into the sheets, then the margins were marked and the sheet was ruled. When the parchment was ready, the scribe wrote the text, leaving gaps for decorated initials and miniatures that were added later. The manuscripts were often richly decorated, also with gold leaves. The last part of completing the book was binding. 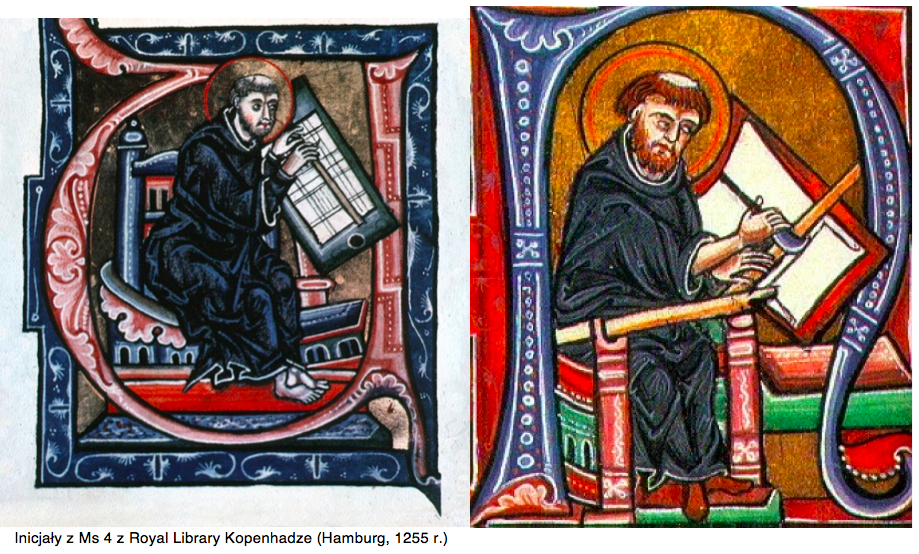 Today I would like to focus on the work of a scribe – that is just writing. A medieval manuscript often started with the short text called “incipit” (incipit liber; łac. Incipio – I start). At the end of the book there was also often a brief description, called a colophon, containing basic information on the book (for example, when and for whom it was written). Sometimes the scribes used a colophon to leave some private words, or a little poem. That could be an expression of a relief – for example, in the manuscript Ital. fol. 149 kept in Jagiellonian Library (Bolonia, 1381, military treatise) there is a following poem at the end:

(„Praise to you Christ, the book ends here”).

Other manuscript, also from the Jagiellonian Library (veterinary treatise, Ital. quart. 65) contains the poem of a scribe who obviously knew how to take care of the business:

(„The book ends here / Praise to Christ for that/ and the writer wants to be paid”). By the way, there is also a nice hand drawing on the margin – such doodles in medieval manuscripts were often placed to mark an important part of the text.

Finally, in VLF 5, f. 172v, a manuscript from the late fourteenth century, kept in Leiden University collection, we can find a colophon that says:

(”This work is written master give me a drink; let the right hand of the scribe be free from the oppressiveness of pain”). 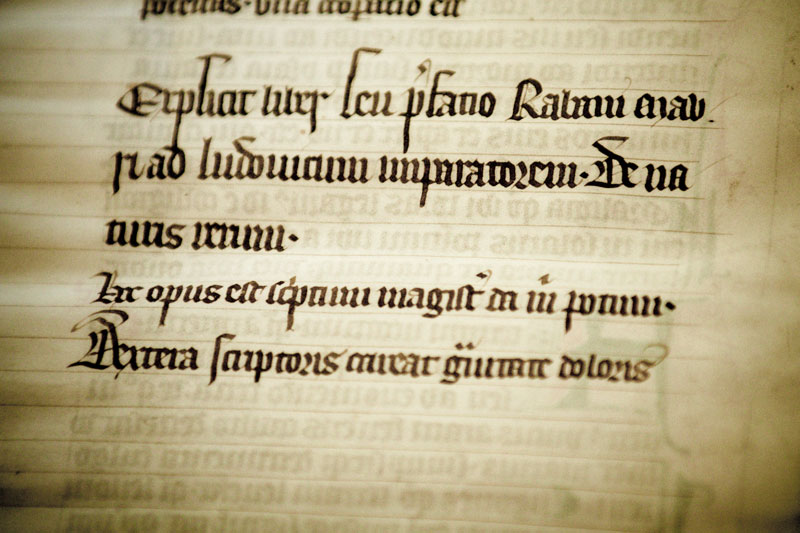 There were actually quite strict rules enforced in monastic scriptoria – for example, about 800 A.D. Saint Theodore the Studite created particular regulations for the monastery of the Studium  at Constantinople. A diet of bread and water was the penalty set for the scribe who focused on reading a book instead of copying it. Monks had to keep their parchment leaves neat and clean, at penalty of 130 penances. 50 penances were prescribed for taking another’s sheets of parchment without permission. If a scribe broke his pen in a fit of temper, he would have to do 30 penances – it looks like even a monk could loose his temper while writing. Actually, the truth is that copying a book was really hard work. The medieval scribes often repeated a short text in their books:

(„For the ignorant to write is not any work/ three fingers are writing, but doing so the entire body is tired”).

The oldest preserved example of these lines is in the Burchard Evangeliary (University Library in Würzburg, 6/7 th century A.D.), but it was often repeated in later manuscripts. The scribes used to complain not only at the end of the book, but sometimes they also put comments on the margins.

The spring 2012 issue of Lapham’s Quarterly, entitled “Means of Communication”, contains an article that lists some complaints, comments and notes that monks wrote in the margins of pages of illuminated manuscripts. For example:

“As the harbor is welcome to the sailor, so is the last line to the scribe.”

“The parchment is hairy.”

“This page has not been written very slowly.”

“Thank God, it will soon be dark.”

“Now I’ve written the whole thing; for Christ’s sake give me a drink.”

Interestingly, sometimes the monks had “conversations” putting remarks on the margins of manuscripts they were copying. Above you can see Irish notes in the Latin manuscript from St. Gallen (Stiftsbibliothek, Cod. Sang. 904, Prisciani Grammatica, 9th century). The margins of another ninth-century Latin manuscript (Cassiodorus’ commentary on the Psalms, Laon, Bibliothèque Municipale, ms. 26)) contain a variety of commonplace remarks written in Irish, for example: “It is cold today.”  “That is natural; it is winter.” “The lamp gives a bad light.” “It is time for us to begin to do some work.” “Well, this vellum is certainly heavy!” “Well, I call this vellum thin!” “I feel quite dull today; I don’t  know what’s wrong with me.” 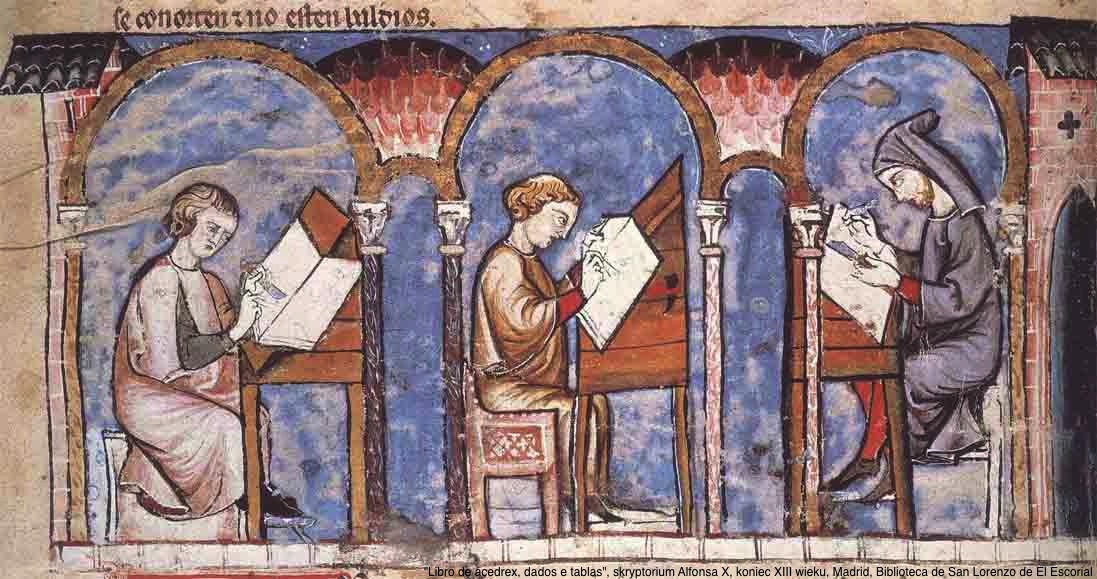 Each medieval manuscript is unique – someone spent long hours to create it. Thanks to the notes on the margins we can discover a piece of medieval monks’ personalities and they become less anonymous for us, as we can see their emotions. Printed books did not take so much effort, but also may contain personal notes on the margins, usually written by their readers. Handwritten notes in the old books show us the thoughts of the people who have used those books throughout the centuries and somehow they share those thoughts with us, although they are long gone. That is something we will never get using e-books.
***
You can read more about the scriptoria and scribes in the book by Bruce M. Metzger, “The text of the New Testament” (available also on-line). Monks’ complaints were published on-line by Brain Picking Blog.