Home » Blog » The painting which is signed, but still mysterious.
Sun30

The painting which is signed, but still mysterious. 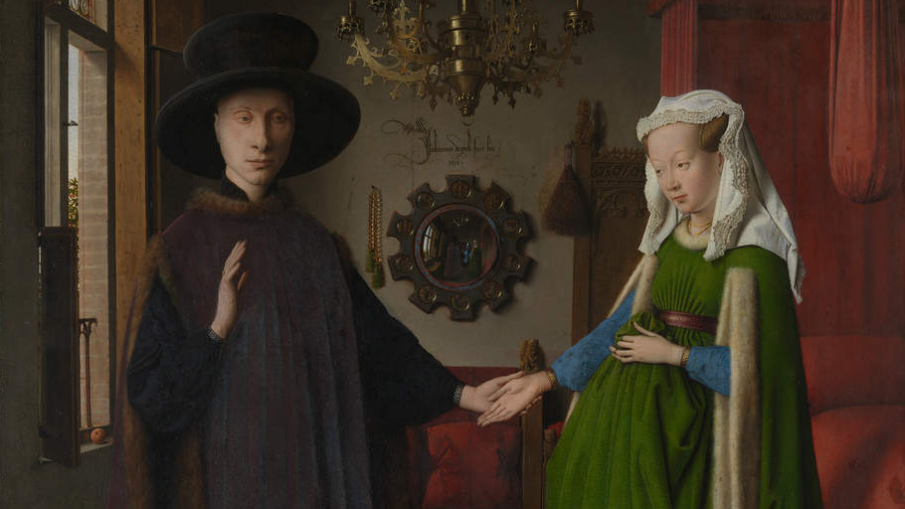 Jan van Eyck is one of the most famous netherlandish painters of 15th century. And one of his best known masterpieces is a double portrait of a man and a woman, that is known as “The Arnolfini Portrait”, or even “The Arnolfini Wedding”. The point is that it is probably not a wedding, and in fact that might not even be the Arnolfinis.

The painting is kept in National Gallery in London, it was painted with oil on panel. It is not big – it’s dimensions are only 82.2 x 60 cm (32.4 in × 23.6 in). It depicts a man and a woman standing in the room, and there are two other people’s reflection visible in the mirror on the back wall of the room. Above the mirror there is an inscription: Johannes de eyck fuit hic / 1434 (Jan van Eyck was here / 1434). It is quite special situation – the painting is signed, and not even on the frame, but in the middle of the scene. The mirror under the inscription is decorated with the medalions containing scenes from Christ’s Passion. 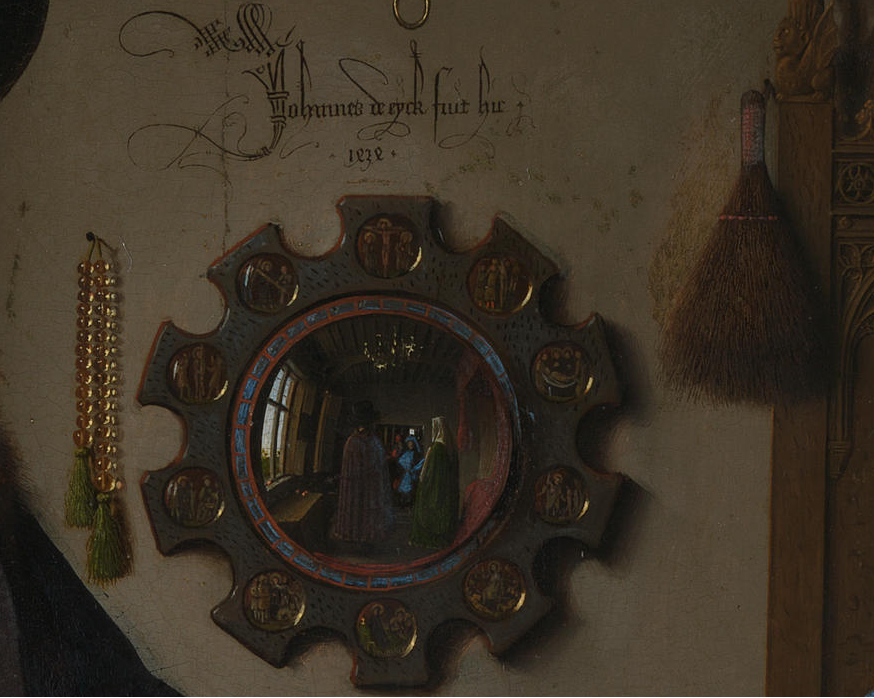 The whole room showed in the painting is full of objects, painted with great precision – Jan van Eyck represents so called Ars Nova, and he was a real master of illusion, especially in case of details. Also, we can assume that all these objects have symbolic meaning. The bed might refer to the marital love, fruits by the window could have a meaning of fertility, a dog symbolizes faithfulness, and the fact that depicted people took their shoes off means that they are in the sacred area – that probably refers to the sanctity of the moment that is depicted in the portrait. That could be an oath taken in the presence of God, who is showed here by one enlightened candle above the couple’s heads. Well, interpreting the meaning of the details showed in this painting is a separate issue, and scholars argue about some of them. Anyway, some kind of contract is shown here, and the other people, reflected in the mirror, are probably the witnesses. But the witnesses of what? 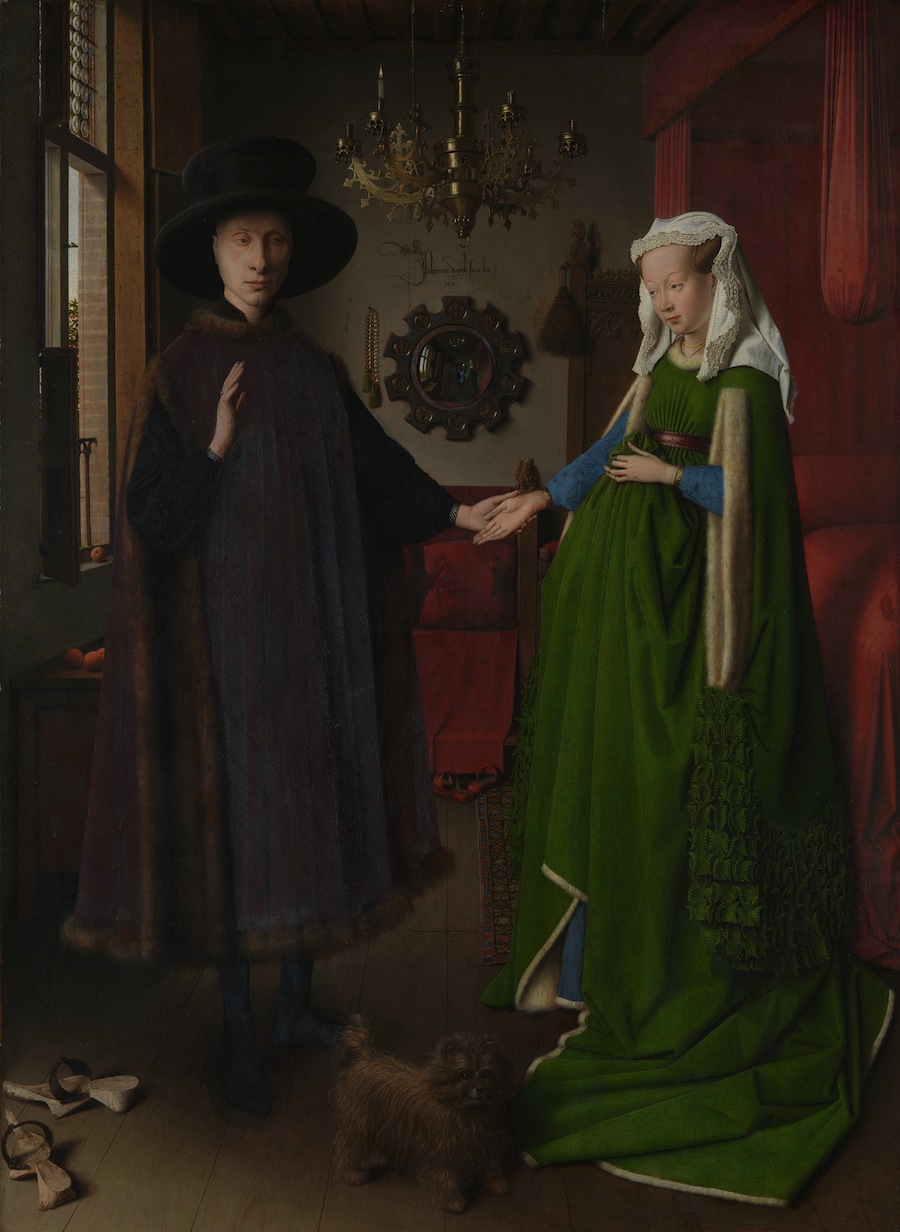 In written sources, the painting was mentioned for the first time in 1516 (the inventory of art collection of Margaret of Austria) – the text says that people in the painting are called Harnoul le Sin and his wife. In 1523/4 there was another description made that says that the man is someone called Arnoult Fin. The scholars at first decided that it refers to Giovanni di Arrigo Arnolfini, although there were more members of Arnolfini family active in Netherlands (they were Italian merchants and bankers). Giovanni di Arrigo was the most famous member of this family, well known in Bruges (remembered even in 19th century). He died in 1472 and his wife, Giovanna Cenami, died in 1480. It was generally assumed that they were the couple portrayed by van Eyck, until recent (in 1997) discovery of the new sources that proved that this couple married in 1447, when van Eyck was already dead. Besides, if they were well-known in Bruges, and died in the second half of 15th century, would they be described as “called Harnoul le Sin” in 1516? It is clear that whoever wrote the inventory, wasn’t sure about the couple on the painting – that should not be the case if it was in fact Giovanni di Arrigo Arnolfini and Giovanna Cenami.

At this point the scholars turned towards another option: in such case it could be another Arnolfini, probably the cousin of Giovianni di Arrigo, named Giovanni di Nicolao Arnolfini, born by the end of the 14th century and died in 1452. His wife was Constanza Trenta, whom he married in 1426, when she was 13. Unfortunately, there are the letters that prove that in 1433 she was already dead (and probably for a while) – and on the painting we have clearly year 1434. We have no sources that would indicate that Giovanni di Nicolao married again after Constanza’s death.

The couple in the painting was a subject of a scholar debate. In 1700 in the spanish royal collection inventory they were described as pregnant German lady and a man whom she marries in the middle of the night (as the candle is enlightened). In 19th century there was an idea that the portrait might depict Jan van Eyck himself with his wife – but we have a portrait that shows Margaret van Eyck and she doesn’t look like this lady… Later it was assumed that the painting shows the wedding – it was supposed to be clandestine, so non-sacramental.

Considering the fact that a man is supposed to be Giovanni di Nicolao Arnolfini, whose wife was dead in 1434, there was a hypothesis that the woman is a post-mortal portrait of Constanza. To support that idea, it was pointed out that is is rather pale and clearly idealized (while the man is portrayed rather realistically), and the candle above husband’s head was supposed to prove that he is the one who is still alive. That hypothesis is not convincing, as well as the idea of a clandestine marriage. Let’s have closer look at the gestures of the couple.

It is obviously an important moment, the man looks as if he is taking a vow. Wedding is a ceremony that consists of a mutual oath and already in Antiquity a couple was supposed to hold their hands – but it is important that as it is a legal agreement they should hold each other’s right hand. This gesture is important in the ceremony today, as it was in ancient times and in Middle Ages, as we can see in art. 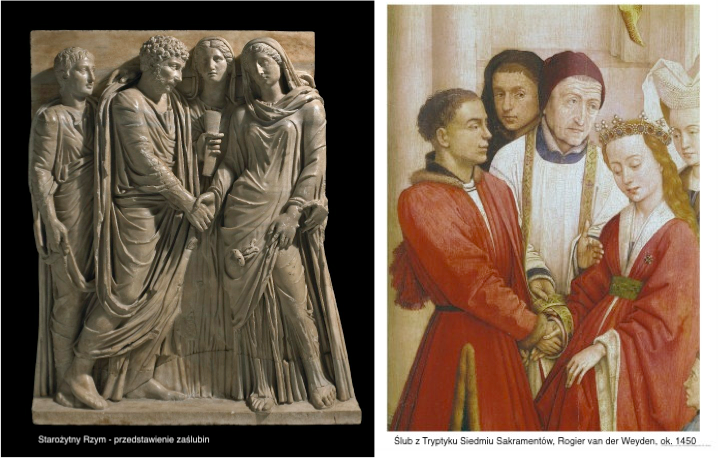 So what could the gesture of the couple on van Eyck’s painting mean? Edwin Hall suggested (and it seems really plausible) that it could be the moment of betrothal! There are some miniatures in the manuscripts of “Decameron”, illustrating the stories of Teodore and Violanta (below on the right,  1432, BNF Arsenal 5070, fol. 204), and Lisa and Perdicone (below on the left,  Biblioteca Apostolica Vaticana, Pal. lat. 1989, fol. 304). In both cases the couples hold their hands in similar way. 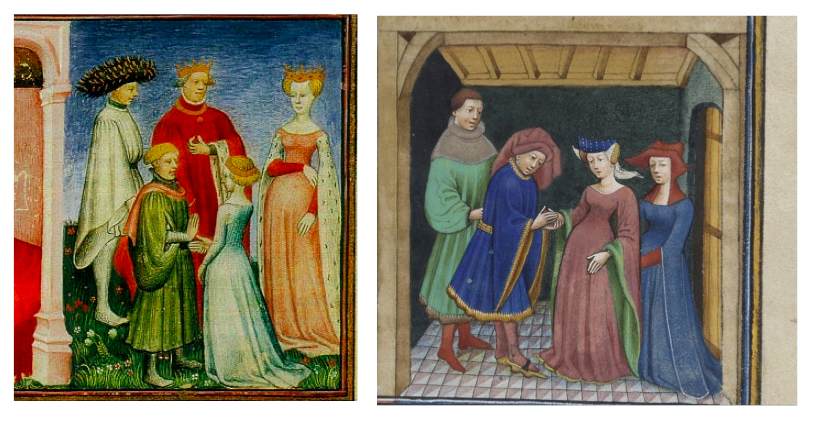 Betrothal was treated like a serious commitment, it could have a form of contract by the presence of witnesses. Maybe it is in fact is Giovanni di Nicolao Arnolfini, a widower, who could have gotten engaged in 1434 with a woman – maybe she was a young widow too (as she has horned wimple on her head, which used to be worn by married women). Maybe for some reason the marriage didn’t take place after all – that would explain why we have no sources on Giovanni’s next marriage. And the painting remained.

There is another proposal: Margaret D. Carroll suggested that it is a moment of legal arrangement by which the husband hands over to his wife the legal authority to conduct business on her own or his behalf. Although that brings us back to the problem of no information about the Giovannis’ wife that could be alive in 1434. Unless it is not even Gioavanni di Nicolao.

And finally one more issue – in spite of appearances, the depicted lady is not pregnant. She has a fashionable gothic silhouette: she’s tall and thin, her arms are narrow, her breasts are small and her belly is round – that is how in 15th century all the ladies were depicted, even virgin saints (obviously not pregnant). However, the most important detail is woman’s green dress – it is very long and made of a thick material, and the lady simply grabbed a fold that she holds in front of her, and that fold creates an illusion of the large belly. 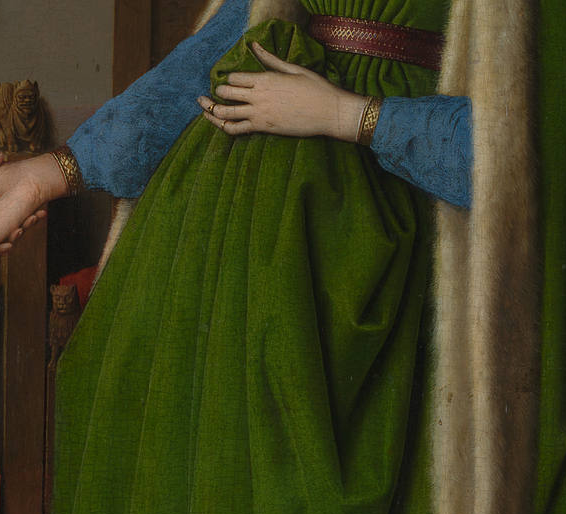 And what is the conclusion of this post? Well, it simply looks like the more famous the painting, the less we know about it. Anyway, it is an exceptional masterpiece, and it beautifully depicts a relation between man and woman. It is just a pity that the man looks a bit like Vladimir Putin.

If you would like to read more on this subject, I recommend you the book by E. Hall: “The Arnolfini Betrothal. Medieval Marriage and the Enigma of Van Eyck’s Double Portrait” (1997).