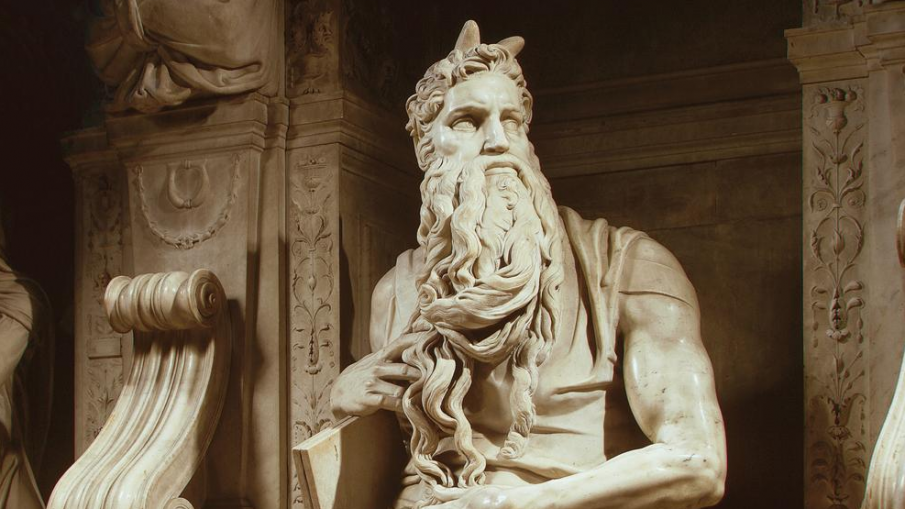 There is a San Pietro in Vincoli basilica in Rome – it is dedicated to Saint Peter in Chains (the chains relics are actually kept there). It is famous mostly for the tomb of Pope Julius II, containing Michelangelo’s statue of Moses. The tomb was initially supposed to be much bigger, and situated in Sain’t Peter’s church in Vatican, but sometimes even the Pope’s plans fail. The tomb, ordered in 1505 wasn’t finished until 1545, and finally was completed in much reduced form. One of the statues of this tomb is a famous Moses with horns on his head, sculpted in the early phase of work, probably around 1512-15. 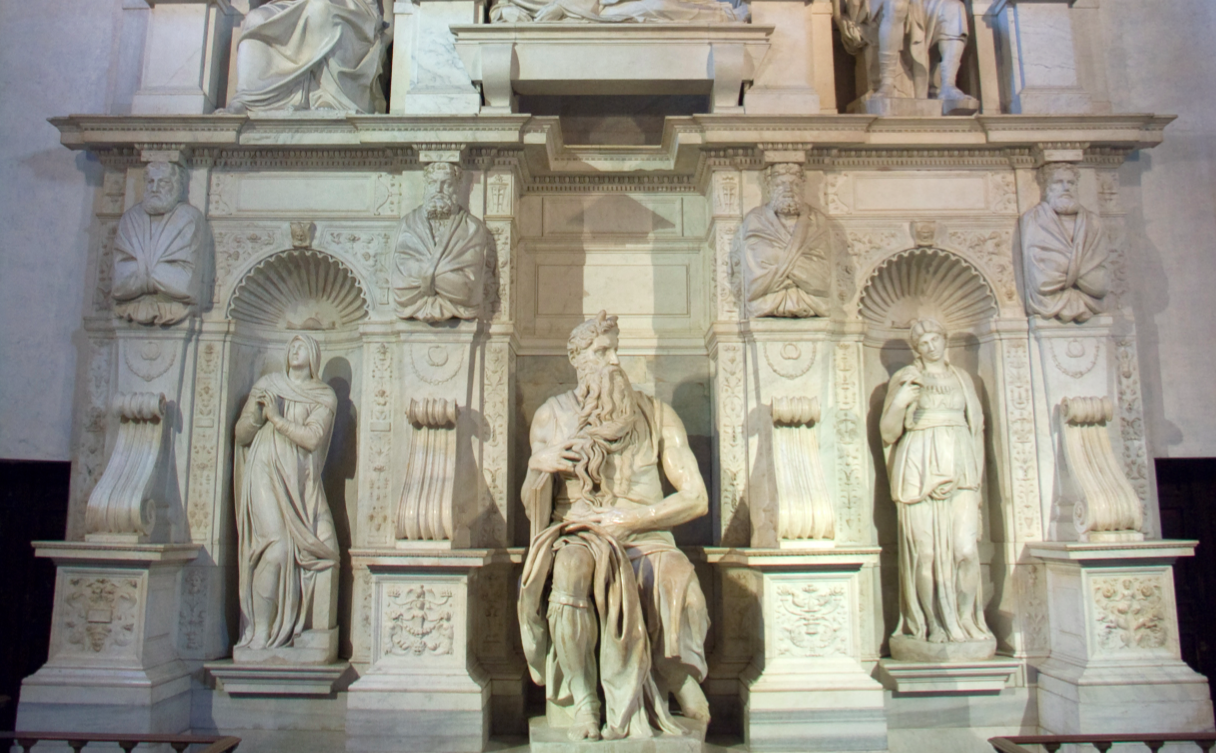 Moses is one of the most important figures of the Old Testament, traditionally considered to be the author of Torah (first 5 books of the Bible: Genesis, Exodus, Leviticus, Numbers and Deuteronomy). He was born in Egypt when Jews were oppressed there, and was set in a marsh on the Nile River in a small craft of bulrushes coated in pitch, observed by his older sister. He was fetched by Pharaoh’s daughter and adopted by her (and his biological mother was employed as  his  nurse). Later God appeared to Moses as a burning bush and told him that he was supposed to deliver his fellow Hebrews from bondage and lead them to the Promised Land. They wandered for 40 years in the desert, and during the journey Moses was summoned by God to Mount Sinai, where he received the Ten Commandments from God. The tablets with commandments, as well as the horns, are the most popular attributes of Moses in fine arts. 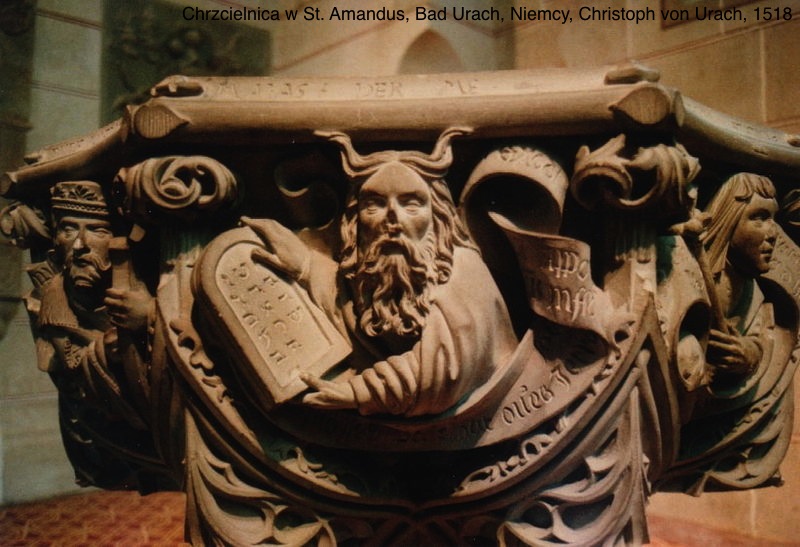 In fact, Moses was commonly depicted with the horns – it is not a Michelangelo’s idea, he just used a common iconographical tradition. It does not mean that we should associate Moses with the devil – absolutely not! In most European languages “wearing the horns” means heaving adulterous wife, but in this case it doesn’t mean that Moses’ wife was unfaithful (at least the Bible does not suggest that). The explanation is actually quite easy: it is a fault of the error in Bible translation, made by Saint Jerome. 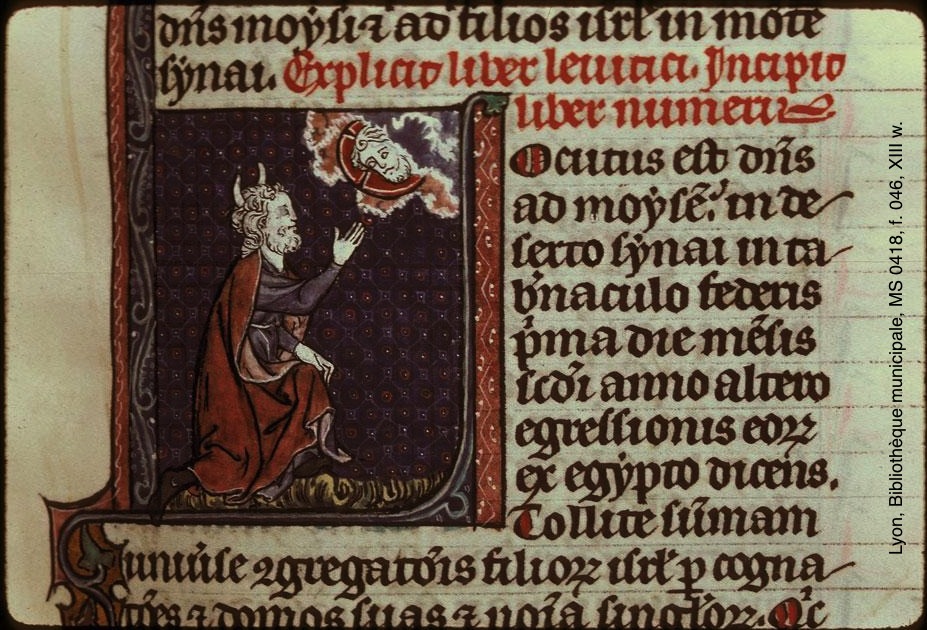 Saint Jerome of Stridon was a Latin Christian priest, confessor, theologian and historian, who also became a Doctor of the Church. He is usually depicted as a cardinal, although there was no such position at his times (it was the later “Golden Legend” that claimed that he became a cardinal at the age of 29). He is best known for his translation of the Bible into Latin, which he completed between 382 AD and 406 AD. His translation is called the Vulgata (versio vulgata means “commonly used translation”) and although it was slightly modified during the ages, it remained the official biblical text used by the Roman Catholic Church until 20th century, when new translations in various languages were made based on the original text.

The problematic part is when Moses returns from the meeting with God on the Mount Synai. Modern Bible translation says: When Moses came down from Mount Sinai with the two tablets of the Testimony in his hands, as he was coming down the mountain, Moses did not know that the skin of his face was radiant because he had been talking to him (Exodus, 34,29). Original hebrew word qaran means “radiant” as well as “with horns” and Saint Jerome unfortunately used the second meaning and described Moses’ face as cornuta, which means “with horns”. Because of that error for many centuries poor Moses was getting horns after his meeting with God.  It was a simple linguistic error, nothing more – but it is so unfortunate, as it can be misunderstood as being cuckolded. One might think that too close relationship with God is not very good for the married life. Interestingly, most of the saints who experienced a mystical ecstasy were actually unmarried. There must be something in it.