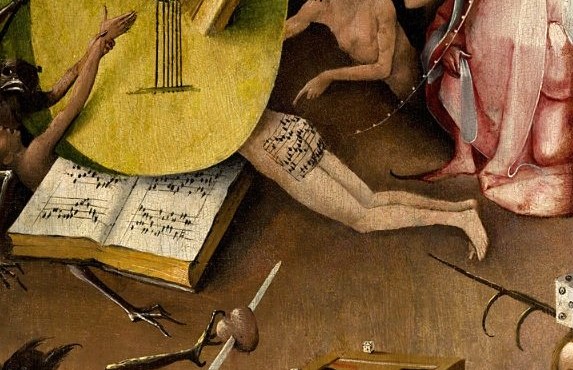 There was quite an interesting Internet hit lately – the “discovery” and recording (!) a song written in notes on the buttocks of a condemned sinner on the left wing of famous triptych by Hieronymus Bosch, called “The Garden of Earthly Delights”. Let’s have a look at this – although it is a masterpiece that surely deserves more than one post on the blog.

Hieronymus Bosch (ca 1454-1516), whose real name was Hieronymus (Jeroen) Anthoniszoon van Aken, was a netherlandish painter active in ‘s-Hertogenbosch in Brabant. One of his most recognizable masterpieces is the triptych mentioned above, which was created probably at the end of the 15th century or shortly after 1500 (although some scholars think it dates back to ca. 1468-78!). It is full of amazing depictions of strange animals and tiny naked people, and fruits – in fact in some 17th century texts it was called “a strawberry painting”. 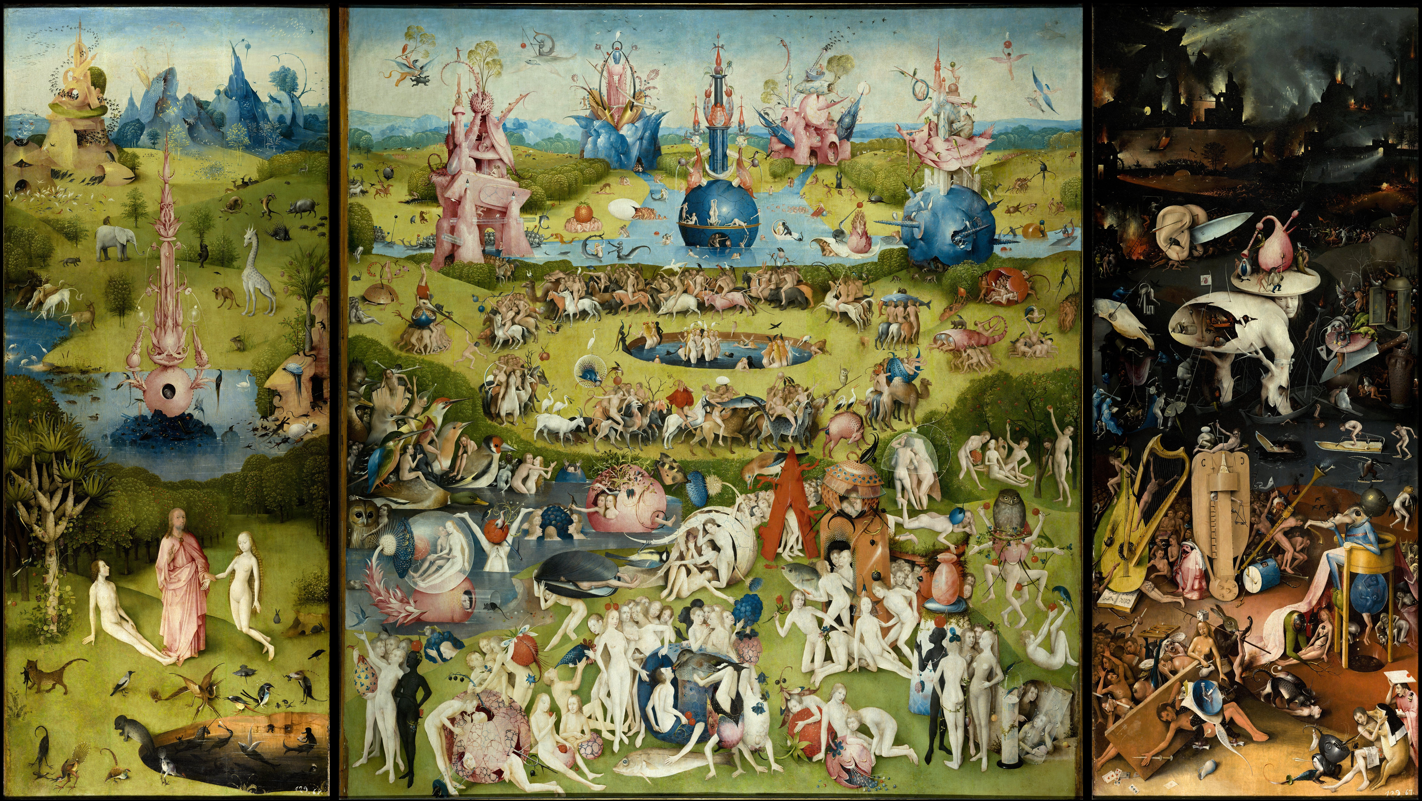 There is a fascinating legend of Bosch that was created through the centuries – it says that he was a visionary, a surrealist artist living 400 years before the surrealism, an outsider, a crazy man, even a schizophrenic. His art was supposed to be the reflection of his madness, or a hermetic code of symbols that are not understandable today. It seems though that all these legends are false. We just don’t want to accept that he simply painted weird things, funny and disturbing, only to create an effect of surprise and shock – with no additional meanings. And if fact, that was probably the case. 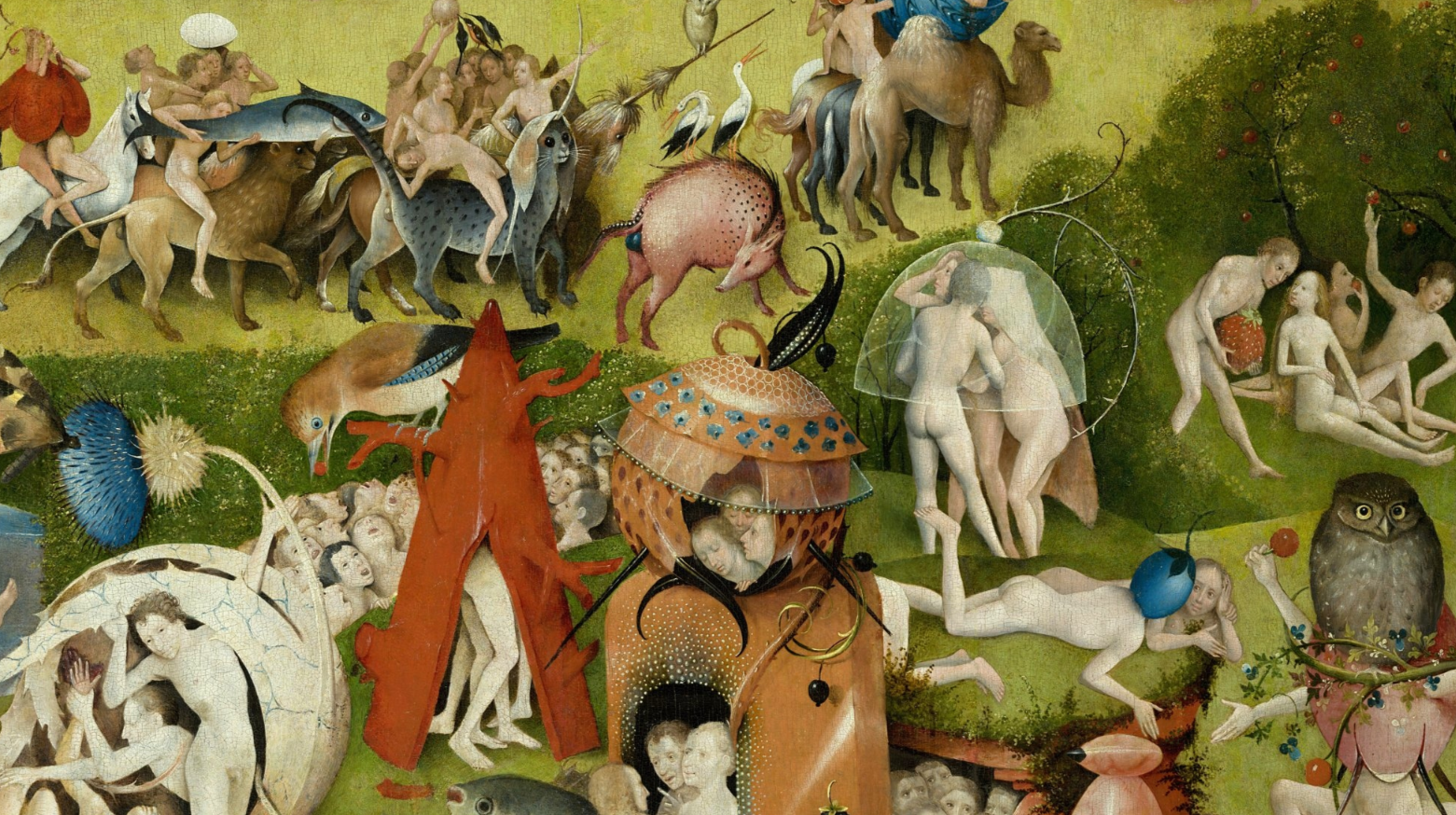 Of course, some of his paintings have symbolic meanings, and we also are capable of interpreting the depictions in general idea (although I must say, there are many proposals of how to read “The Garden of Earthly Delights”). For example, if we “read” the triptych from left to right, we start with the Paradise, which is lost, than we have the present time in the central part (where all the people are consumed by passions) and finally the Hell in the right wing is what is waiting for all the sinners. In netherlandish graphics of 16th century a motive of a couple that plays a music together, hunts for birds or fishes, was often used as a symbol of adultery. Here we have almost the same, but with bigger fantasy.

Hieronymus Bosch was mentioned in archives around 50 times – we can see him as a wealthy and respected citizen, a member of a prestigious Brotherhood of Our Blessed Lady, a husband of a rich merchant’s daughter. He ran a successful workshop and his clients belonged to the elites. It doesn’ t go with the myth of a misunderstood outsider-artist, does it? Moreover, recent dendrochronological exams proved that probably some of the paintings that used to be considered as Bosch’s, had actually been created after his death. That means that his art was so popular that others imitated it when he was gone! 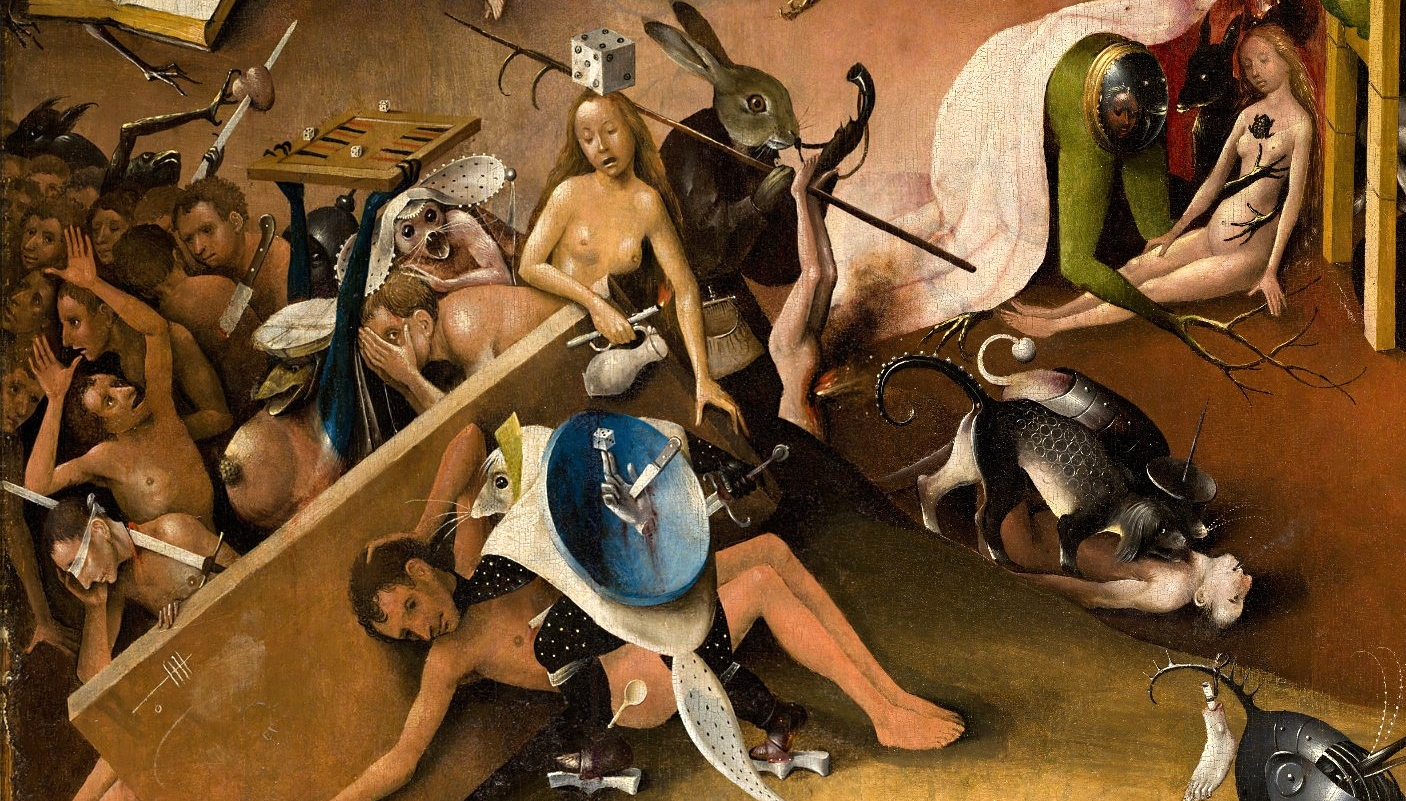 Who commissioned paintings in Bosch’s workshop? Usually the dukes, the counts, the members of the wealthiest families. “The Garden of Earthly Delights” was created as a part of the decoration in the town palace of the Counts of the House of Nassau in Brussels. Despite it’s triptych form, it was not intended to be an altar – it was a part of a collection kept in the cabinet of the curiosities. Those cabinets are something I will for sure get back to in the future, and now lets say just a few words about them. Cabinets of the curiosities were special rooms dedicated for the collections of the nobility. The collections contained pieces of art as well as strange objects of natural history, curiosities of the nature. It was very fashionable in Renaissance Europe to have such collections and to show them to the guests. Bosch’s paintings fit perfectly to such purpose, don’t they? Additionally, there is a text by Antonio de Beatis – he saw “The Garden of Earthly Delights” in 1517 and described it as containing bizarre things, painted with fantasy, and as impossible to describe in words. That actually means that even contemporary viewers did not see a particular symbolical meaning in this triptych, but rather enjoyed its weirdness. Maybe  we should do the same and stop digging for hidden agenda.

Well, let’s be honest – romantic legends are something we should put aside. Bosch was simply a genius of marketing – he found out that there was a market for bizarre stuff and that nobility is willing to pay a lot for it. Don’t we act the same way today? 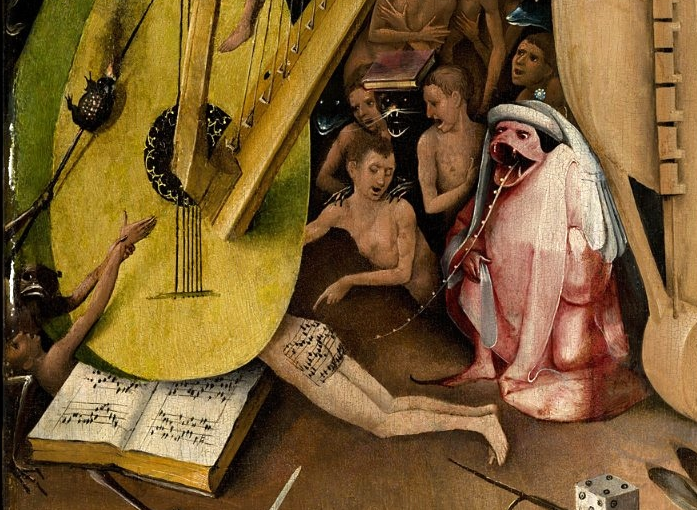 And finally, “the butt song”. A collage student from Oklahoma, named Amelia, saw the notes on the painting and decided to transcript them to the modern notation. That allowed her, after reconstructing the few gaps, to play the melody. It goes like this:

Of course, Internet reacted immediately – the text about butt song from hell was written. The words are not very deep, but choral sounds nice:

this is the butt song from hell

we sing from our asses while burning in purgatory

the butt song from hell

the butt song from hell

“The Garden of Earthly Delights” have so many details that it will probably come back as an Internet hit many times in the future. We just nod with respect. That Bosch was not a lunatic… he was a man of a huge marketing potential, which has not dried out after over 500 years!

I very much recommend you the interactive journey through the “Garden of Earthly Delights” now available at https://tuinderlusten-jheronimusbosch.ntr.nl/en – it is a fantastic project! Also, it includes the problem of a “Buttock Song” – surprisingly we may learn that Amelia Hamrick was not the first one to recreate the notes from the sinners’ buttocks. It was already done in 1978 by the Spanish monk Gregorio Paniagua – but sadly he was not the one who enjoyed all the fame in the Internet… 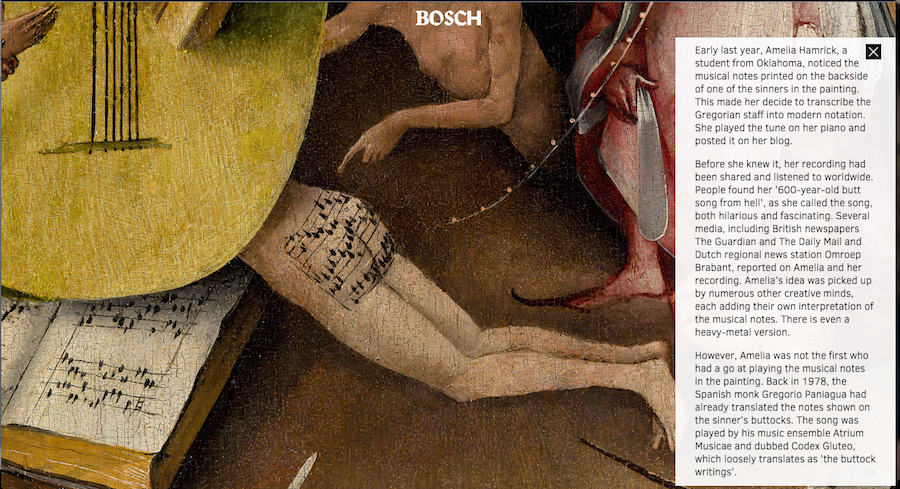