This is not Venus! 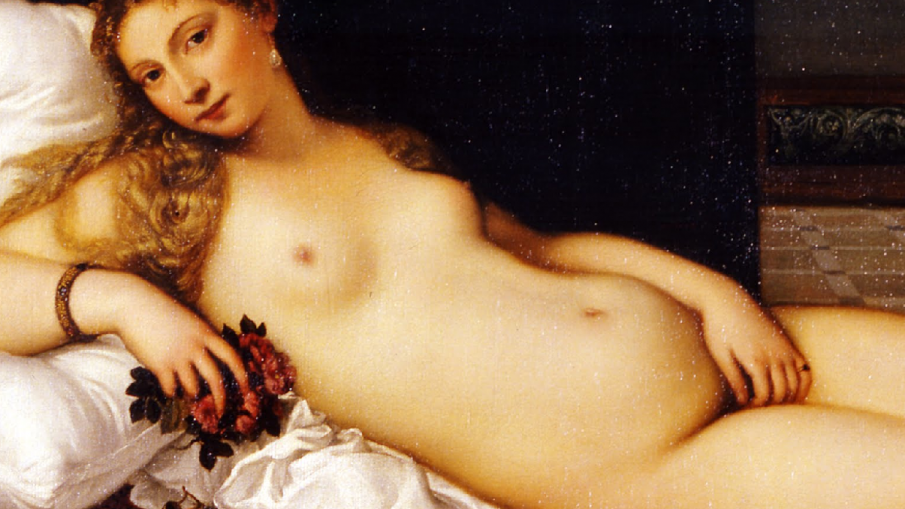 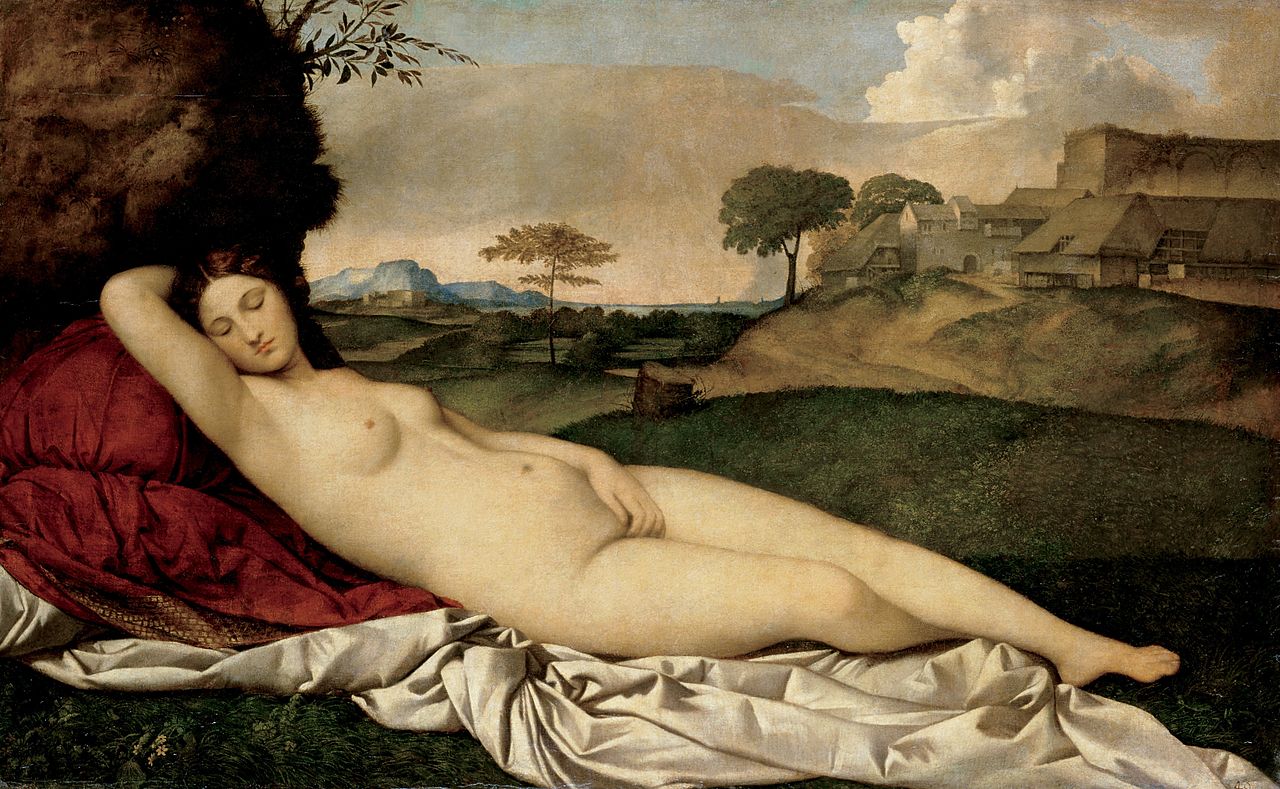 Titian surely based his composision on earlier painting by Giorgione, called “Sleeping Venus”, shown above. That painting was not finished by Giorgione, who died in 1510, but by Titian himself – he added the landscape, and the Cupid by Venus’ feet, which is now not visible, as the painting was later repainted in some parts. Anyway, that Cupid ensures us that the sleeping lady must be identified as Venus. She is sleeping in a landscape, which makes her inseparably linked to the Nature, but on the other hand it also makes the whole scene unreal (even in 16th century you didn’t just step on naked ladies sleeping on the lawn). But in the room, in the bed – that is a different situation! Actually, naked lady might happen there.  And that is why Titian’s “Venus” is much more erotic than Giorgione’s, whose Venus is not only imaginary as a mythological person, but also is asleep. The hand of sleeping Venus lies limply on her womb – we are assuming that it is an unconscious gesture made in a sleep. On the other hand, “Venus of Urbino” lies on the bed awaken – she looks directly towards the viewer and she deliberately touches herself, with no shame. Apart from the similarities of these compositions, the meaning of the paintings is very different. 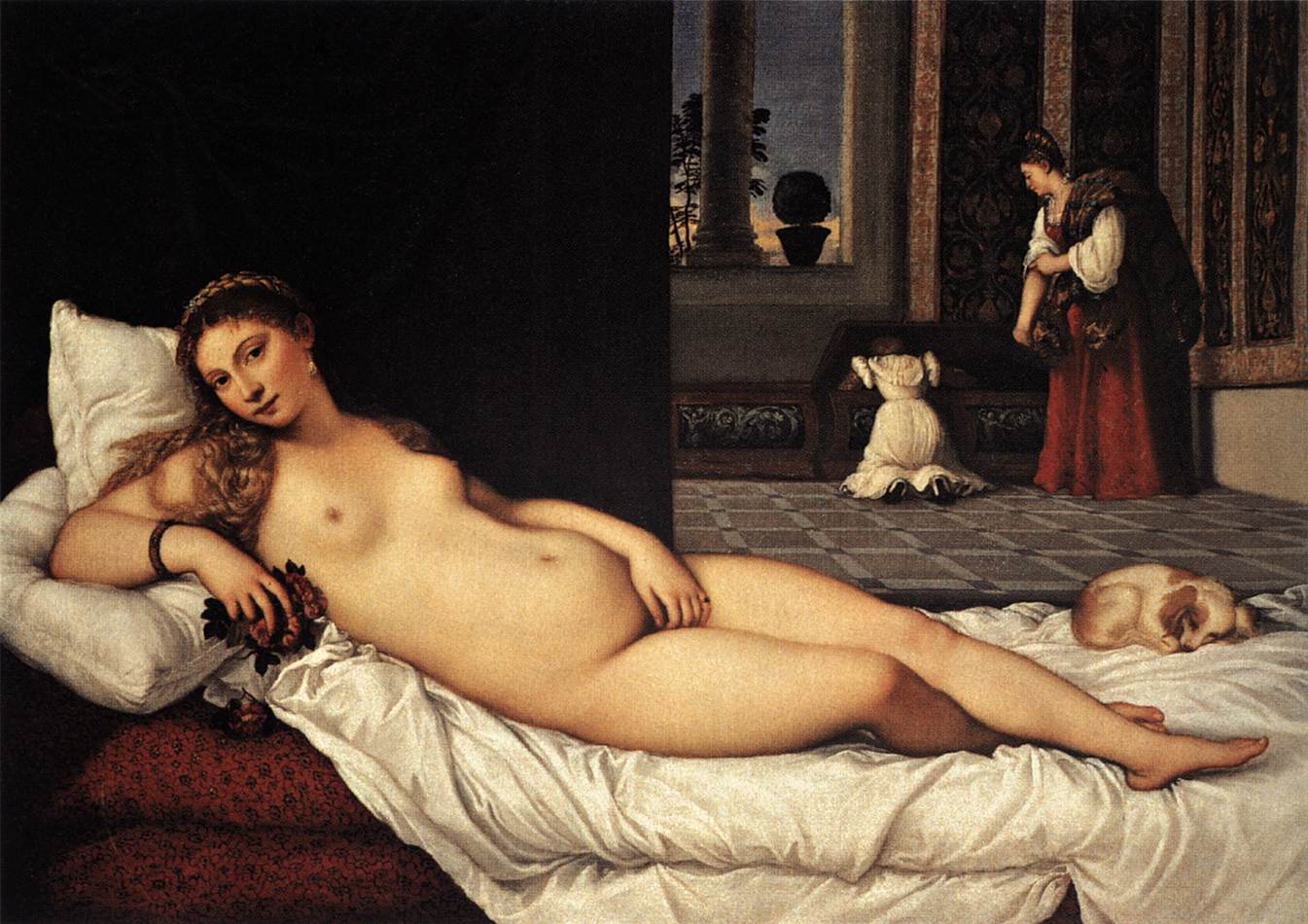 Titian’s painting is known as “Venus”, but this title was actually given to it later – in fact there is nothing that could indicate that the intention of the artist was to show the ancient goddess. We know that the painting was purchased by Guidobaldo della Rovere, future prince of Urbino – he bought it in may 1538, after three moths of negotiating. That means that probably the prince was not the founder of this painting – he bought it when it was already finished. In his letters, Guidobaldo describes the painting as “naked lady” – the name “Venus” was used for the first time in reference to it by Giorgio Vasari in 1568, who saw the painting in the prince’s chamber in Pesaro. It is quite likely that the model was Angela del Moro, famous Venetian courtesan, who – as we know – dined with Titian.

In the first half of the 16th century it was very popular in Italy to discuss the topic of love – in the literature, in the philosophy and in art. Female nudes were considered as bearing very positive meaning – they symbolized such values as the beauty, the truth, the genius, the soul, the friendship. Erotic themes were quite popular back then. Jozef Grabski interpreted “Venus of Urbino” as the image of the the love sonnets of one of the greatest poets of Italian Renaissance, Vittoria Colonna (Victoria Columna), written after the death of her husband Ferdinando Francesco (Ferrante) d’Avalos. Colors and objects shown on the painting would in that case symbolize love, death, faithfulness and hope.

First of all, we need to pose a question: is it a gesture of hiding the womb (therefore the gesture of modesty), or, contrarily: an autoerotic gesture? The idea of the meaning of the modesty is supported by the tradition of depicting Venus Pudica: ashamed, hiding her nudity with her hands. It was a depiction very popular in ancient times, as well as in the Renaissance. But there is a difference between covering the womb with the palm and touching it as Venus of Urbino does! So, could this really be an image of the act of masturbation? Surprisingly, that might be the case! 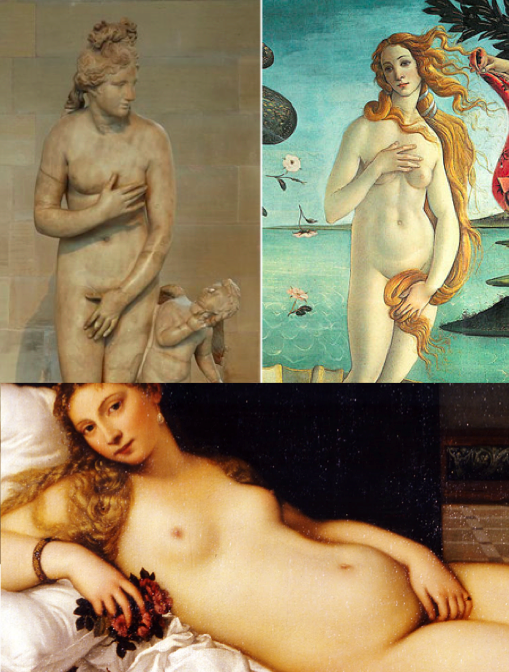 We need to face the truth, political correctness aside – some actions are judged differently depending on weather it is done by men or women.  Actually, masturbating was always considered wrong, as long as we talk about men because it is an act of wasting the semen. The word “onanism” comes from biblical Onan, who actually performed coitus interruptus – the point is that it is a sin to have a sexual pleasure avoiding conceiving a child. In case of women the issue is completely different. We know that in 16th century Italy people believed that having an orgasm helps woman to conceive – that means that the ladies should know their bodies and know how to arouse them to give their husbands the children. Actually, autoerotic activities were recommended to the young wives – as we know, not all the men are capable of giving their wives satisfaction, and the wives should make sure that they will be able to conceive… so, in that case, it is possible that the painting given to young Giulia was in fact showing a woman who is pleasuring herself – and additionally, Giulia was supposed to learn from this a valuable lesson! We don’t know how it went, but anyway it did not have expected effect, as Giulia gave birth only to one daughter, and it was six years later…

If you would like to learn more on the subject, I recommend you the book by Kelly Denis “Art/Porn. A History of Seeing and Touching” (2009 r.) – it is actually available in significant parts in the Google Books service.