It’s time to wear a mask 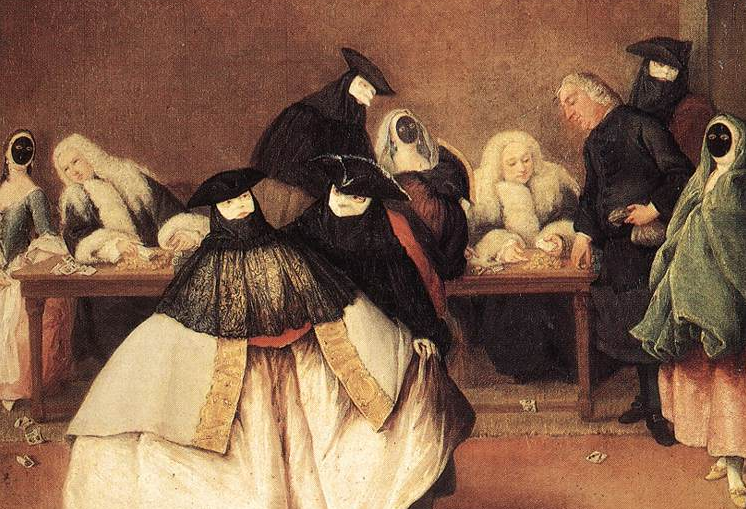 In Europe, the Carnival is associated mainly with Venice, and the Venetian carnival associates with the masks. As we are now in the meddle of the carnival, we might look into this issue.

It is not entirely clear what the source of the word “carnival” is. It might come from carne vale (farewell of a meat), or maybe from carrus navalis – that is a wheeled car in shape of a ship that was used during the festival of Isis, and later of Dionysus. Antic path does make sense here, although we are used to think of the carnival as of an event of the christians… 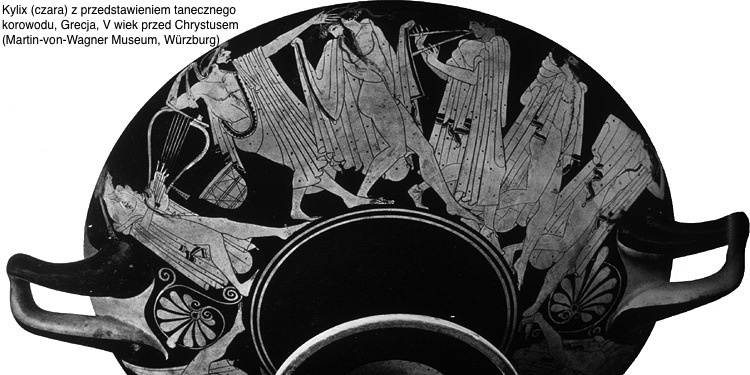 There was a festival celebrated in ancient Greece at the turn of December and January – so called Rural Dionysia, which was the feast of the young wine, as it was a moment when the new wine was opened for the first time every year. It was a feast of drinking and dancing on the streets – whoever had an opportunity to taste a young wine (nowadays usually drunk in November) knows how fast it works… In ancient Rome in December there was a festival called Saturnalia that led to the feast of the Birth of Sol Invictus (the Undefeated Sun God), which was celebrated on the Winter Solstice that was on 25th December in Julian Calendar. Today’s carnival probably came from those Roman festivals: Saturnalia in January and Bacchanalia in March. Christians, after many discussions, decided to set the date of Christ’s birth on December 25th.

At this time of year ancient Romans celebrated New Year’s Day – on this occasion they gave each other presents. At first, Roman New Year was set at the beginning of March – that is why in many languages today last four months of the year are named after Roman numerals that are not exactly the numbers of those months in a modern year (September means seventh, October – eighth, November – ninth and December – tenth). In the 2nd century BC there was a change, and from that time the New Year begun on the 1st day of January (by the way, this month’s name comes from Janus, the god of the beginnings). Early Christians did not pick it up at first and set alternative dates for the New Year: for example, January 6th (which is now the Epiphany in Roman Catholic Church and Christmas in Orthodox Church). Today the Epiphany is the day we begin the carnival! And celebrating New Year’s Eve is usually associated with the joy that was supposed to spread when by the end of the year 1000 the world didn’t end, as people believed might had happened, according to the prophecy of Sybil. 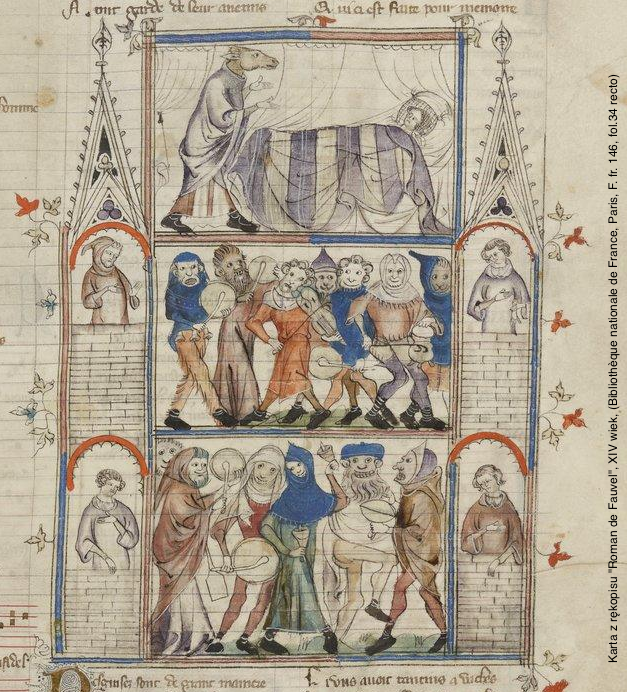 The aftermath of roman Saturnalia was the medieval Festum Fatuorum (Feast of Fools), which was celebrated on 28th December and 1st January. It was mostly the feast of lower clergy and students – the magical moment when their world changed, when the social rules might have been ignored and sacrum and profanum was entirely mixed. That feast was celebrated from the 5th to the 15th century.  Young people chose from among their own number a mock king and the bishop of the fools, who entered the church riding backwards a donkey. A donkey is actually an interesting animal in this context, as there also was a Feast of the Ass, celebrated mainly in France on January 14th (a feast of the Flight into Egypt). On that day a girl and a child on a donkey would be led through the town to the church, where the donkey would stand beside the altar during the sermon, and the congregation would “hee-haw” their responses to the priest. Can we imagine such a service today? 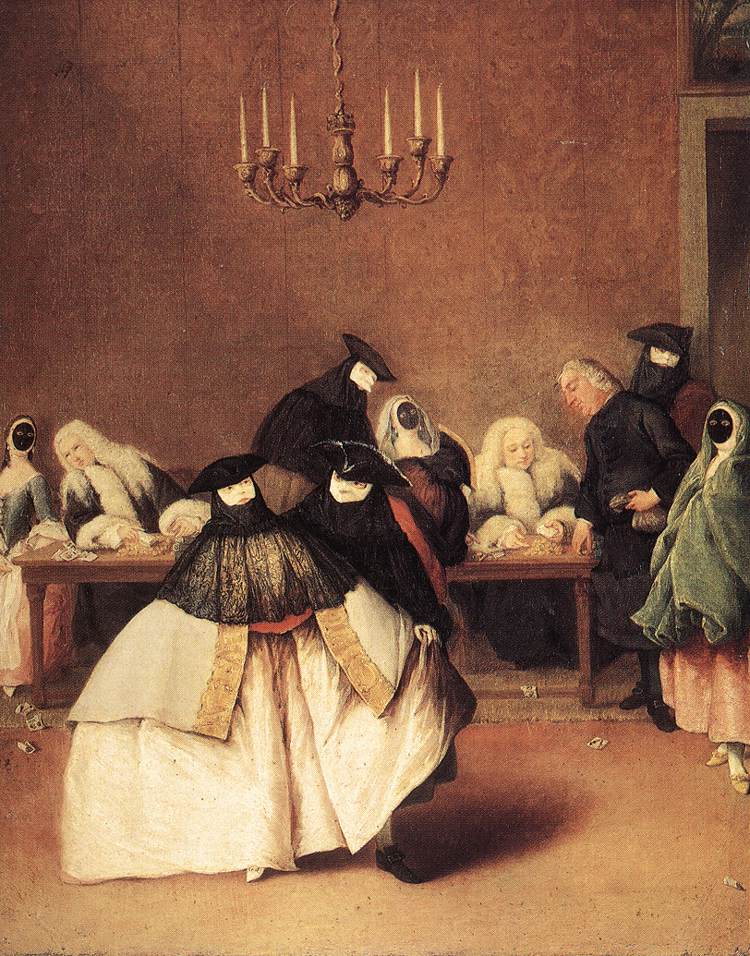 Actually, the painting “Il Ridotto” (1740-s, Accademia Carrara in Bergamo), created by Pietro Longhi, doesn’t have to refer to the carnival, in spite of the masks. The word “Ridotto” means a private, closed room – that was how they called private illegal gambling houses in Venice. Finally, in 1638 Venetian government opened the first official municipal casino, legal and available for everyone, which was also called Il Ridotto. So finally it was a public place where people often gambled, but also had secret meetings – connected with illegal business, political intrigues and affairs. Most of the visitors wore masks – not only at the time of the carnival. Pierto Longi painted this place many times – below you can see another painting, “Ridotto in Venice” (1750-s, private collection). 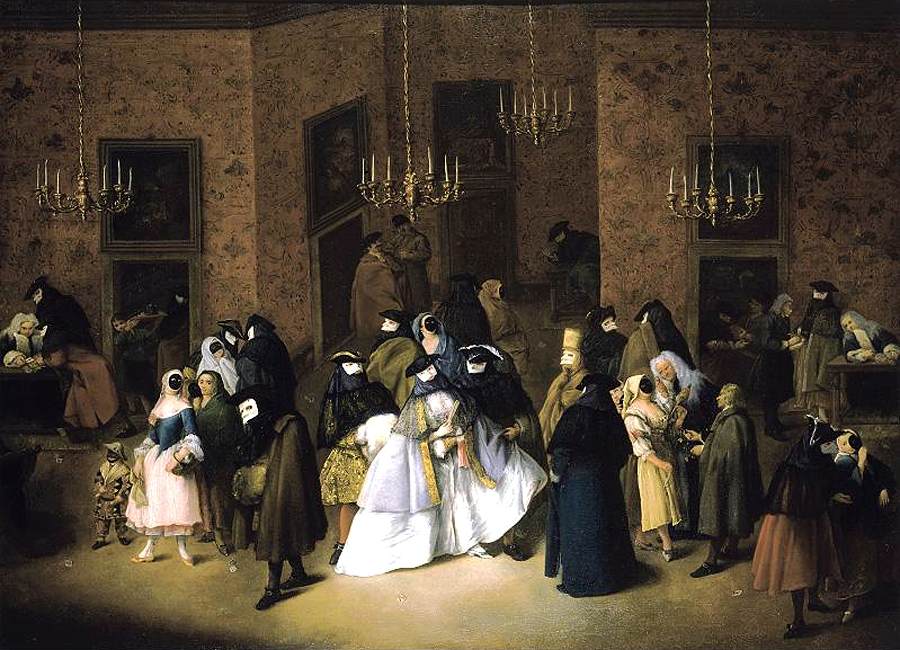 Masks were originally supposed to help maintain anonymous during the carnival so that masters and servants could celebrate together without recognizing each other. It turned out that the Venetians would like to wear the masks almost for entire year – being anonymous was very convenient for gambling an having affairs. Wearing masks was legal in Venice not only during carnival, but starting from October 5th until Christmas, or even more often, if certain rules were obeyed. For example the masked person was not allowed to carry any weapon – it would be too tempting if there was a chance to use it against someone while wearing a mask…

Venetian masks were created in several types – some of them referred to the theatre form called Commedia dell’arte. The others were connected to the history of Venice – for example famous beak-like mask called Il Medico della Peste (A Plague Doctor). It imitated real masks the medics wore during the plague epidemics: the beaks were filled with aromatic items that were supposed to protect from putrid air and helped standing the smell of the decomposing corpses. 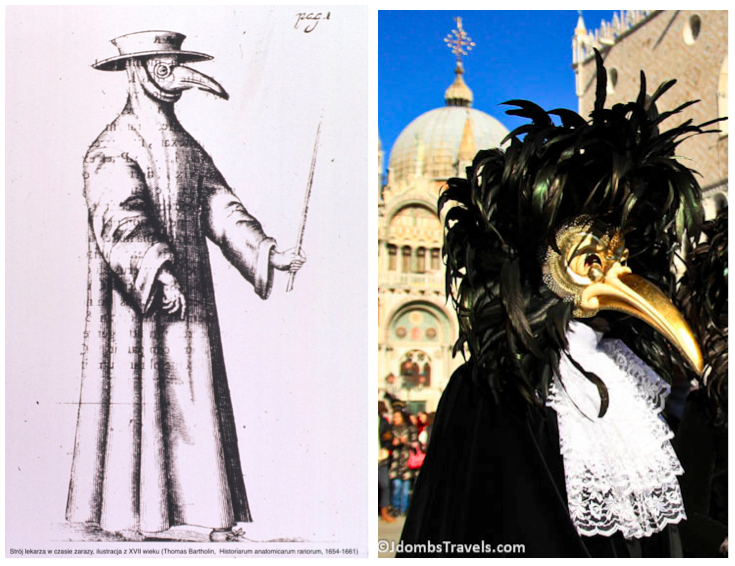 The Venetian carnival, according to the tradition, was supposed to start from the celebration of a victory of Venice over Aquilea in 1162. The best time for that carnival was in the 17th and the 18th centuries, and finally it was forbidden in 1797 by the Austrians (as they took over the city). We understand why – the Austrians feared that wearing masks would help Venetians to plot against them.  The Venetian Carnival was restored in 1979 and it is now the biggest event of the city that brings around 3 millions tourists every year. They leave their money in the casinos, they are having affairs in the hotels, but they don’t feel they need to hide their faces anymore. Did we lost our sense of shame? Or maybe in the crowded global village we feel so anonymous that we no longer need to wear the masks?