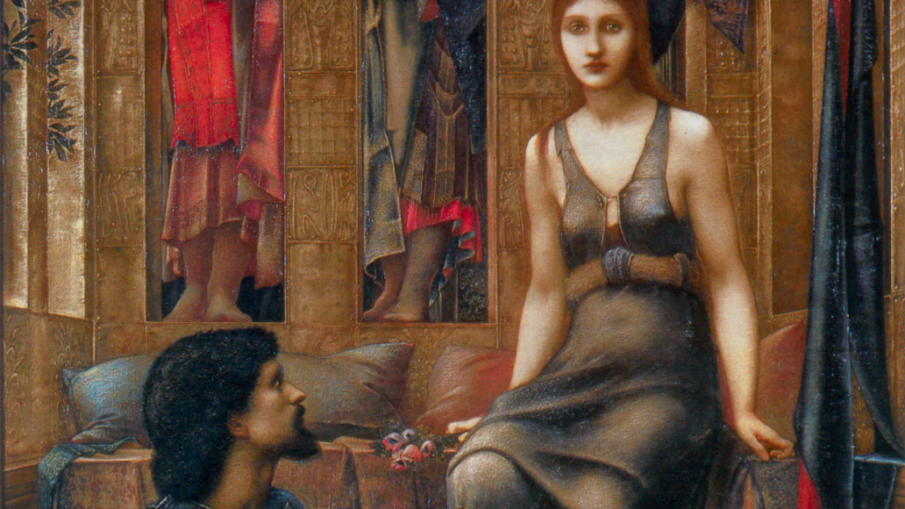 The painting “King Cophetua and the Beggar Maid” by Edward Burne-Jones, was finished in 1884, exhibited in 1884 in the Grosvenor Gallery and bought by Tate Gallery in London in 1900.

Edward Burne-Jones is associated with the later phase of the Pre-Raphaelite movement, which was created in 1848 by three students of the Royal Academy: Dante Gabriel Rossetti, William Holman Hunt and John Everett Millais. They rejected Academic art and created a style based on the gothic and early-renaissance art, up to the late Raphael’s works (hence the name “Pre-Raphaelite”). Burne-Jones often focused on medieval legends and romantic poetry, and created many symbolic paintings.

“King Cophetua and the Beggar Maid” is an oil panel painting of the dimensions 293.4 cm × 135.9 cm (115.5 in × 53.5 in). It is signed „E.B.J. 1884”. It depicts a story of an Old-English legend about the king Cophetua, an African ruler, who rejected all the women until he met a beautiful beggar maid Penelophon – he fell in love with her, he married her, made her a queen and they lived happily ever after. Sounds like Cinderella, doesn’t it? The story comes from an Old-English song; in 1612 it was published as „A song of a Beggar and a King” in „Crown Garland of Golden Roses” by Richard Johnson, and in 1765 Thomas Percy placed it in his „Relics of Ancient English Poetry”. Later, the topic was taken by Alfred Tennyson, who wrote a short poem „The Beggar Maid” – it is concentrated on the moment when the king saw the girl and fell in love with her. That is also the moment that inspired Edward Burne-Jones.

In the Tennyson’s poem the king just makes a statement that he decided to marry the beggar maid – in the painting he rather seems to wait for her decision: he took off his crown and placed all his arms by her feet. However, Penelophon doesn’t look thrilled and doesn’t throw herself in his arms. She looks rather sad – why? On one hand, she knows that it is one-in-a-lifetime opportunity, but on the other hand she seems to see that what the king offers is not a true love. He simply calculates: she is beautiful but poor, so making her a queen would force her to be grateful forever. Because the truth is that no Cinderella will ever have right to expect partnership from the prince who saved her and turned from servant to queen. She just has to be grateful and he will never have to respect her as he would if she was a princess, socially equal to him. Anemone, which Penelophon holds in her hand in the painting, symbolize unrequited love. It is a sad fairy tale – but at least the woman in the painting seems to hesitate, maybe she will withdraw from this contract at the end. Cinderella didn’t have any doubts, she just locked herself in the golden cage with a smile on her face. The message of the fairy tale is in fact quite brutal: a woman is lucky if she finds a wealthy man who decides to marry her – there’s no other way for her to achieve anything in her life, so if such a chance occurs she should take it and be happy. It is not politically correct, but that is exactly the fairy-tale truth.

And as we speak about the fairy tales, it is worth mentioning that most of the famous ones come from old European stories, which originally were actually quite brutal and different from what we know now. For example, The Sleeping Beauty appeared in the tales by Giambattista Basile (1575-1632). The Beauty’s name was Talia and she was not waken up by the kiss of the Prince Charming… just one day a king came to her palace (looking for a missed falcon), saw her sleeping and found her attractive, so he just raped her and left, leaving her still asleep. She got pregnant from this rape and she gave birth to the twins (still unconscious) – one of the children had sucked out the poisoned flax that was stuck deep in Talia’s finger and she finally woke up. Well, that would be all on the subject of the Charming Princes.